I’ve upgraded to snapshot build for openhabian. Currently on build 1029. I believe I’ve updated everything correctly via openhbian-config tool. The reason to switch to snapshot build so I could get an updated version of the zwave binding.

When I launched paper UI, I noticed that the Items menu is missing and the Control Menu is entirely blank. Also, when I switch between any menu, I get the notification in the lower right “Error 500 - Internal Server Error”.

Did I miss a step when upgrading? 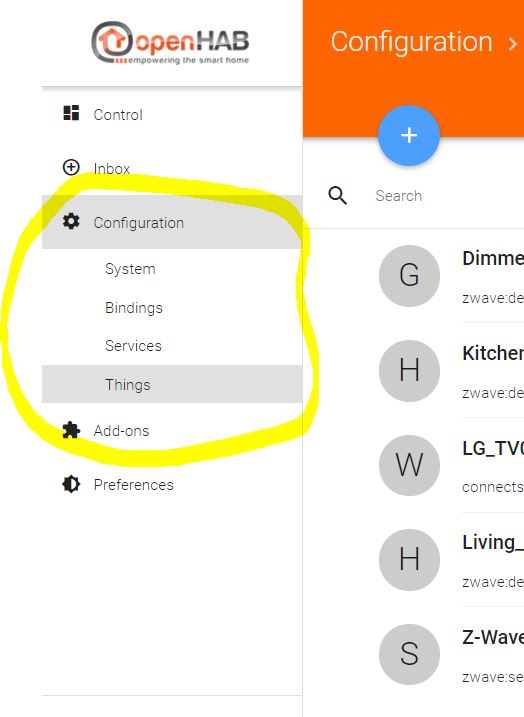 I guess it is related, I’m seeing the same.

Are you seeing these errors after updating from 2.1 stable? Openhabian?

Do you have any work around?

Make certain you do not have Simple Mode enabled. When in Simple Mode, Items get created automatically for each Thing and the Items menu does not appear under Configuration.

Beyond that, watch that issue.

Are you seeing these errors after updating from 2.1 stable?

Do you have any work around?

Make certain you do not have Simple Mode enabled.

that: revert back to your previous version.
I don’t have Simple Mode enabled and don’t see my Items tab anymore…

Problem is still there in build 1029

Has anyone tried a newer build to see if the items list showed back up?

It looks to me like this is a problem with the UI/whatever reads the config files. I noticed when I added a new Thing today on build 1031 (windows) that it had added all items/links as if I had simple mode on. I checked the setting in PaperUI and Habmin and it was off. I turned it on and off again and the items list showed back up. Refresh the page and it goes away again.

So it looks like OpenHAB is running off of defaults for some things but the UI is loading the saved values.

a problem with the UI/whatever reads the config files.

Yepp, that could be it:

Issue: Component XML generation broken for services with a configuration-pid