Hi, Im trying to calculate relative humidity with the formula shown in the image below: 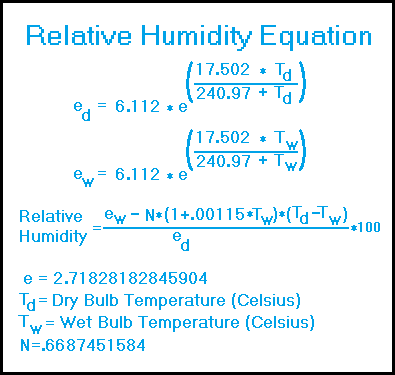 what am I doing wrong? I can not get it to work
thanks

I can not get it to work

I put h4 in sitemap, nothing appears and other rules stop working after adding this block of rule

Check your console log - any errors there? What’s the definition of item t2 and t4? Are they Number items?

If you want to update an Item’s state, then just update it. Sending commands adds overhead for no reason.
ed4.postUpdate( ...

This is doomed to failure.
sendCommand (and postUpdate) is asynchronous. The request gets sent away to openHABs events bus, triggering any bindings or rules that are interested, eventually updating the actual Item state. It takes time, a few milliseconds, but real time.
Meantime, your rule does not stop and wait.
If you try to use ed4 (you meant ed4.state I suppose) in the same rule you will probably get the “old” state from before the update was requested.

That’s okay, you already know what you sent - use that directly.

Also, you only supply one argument to the Math.exp() function, which is certainly going to produce errors, probably already when the rule is loaded, so it’s not going to run at all. Always check the logs for errors when working with rules.

The correct calculation on the first row should be (also changed to assign the value to a variable instead of trying to send a command to the Item as pointed out above):

Math.E is Euler’s number (the e in your equations above), a mathematical constant, which need to be included in the calculation.

Hi, Im trying to calculate relative humidity with the formula shown in the image below:

It’s worth pointing out that there is a whole binding dedicated to doing these sorts of weather calculations. hww3 / org.openhab.binding.weathercalculations / Downloads — Bitbucket Unfortunately it doesn’t appear to be an official binding yet.

A big calculation like that is likely to take quite some time for openHAB to parse. I’ve seen just one line like the above add 10 minutes to the amount of time it takes to parse and load a .rules file like that on a fast machine. On an RPi it could take 30 minutes or more. Are you sure that what’s happening isn’t just that it’s waiting on the rule to be loaded? What’s the CPU doing when you change this file?

In addition to all of the other recommendations made here I suggest you break the calculation up. Any time you have a big calculation all on one line like this it becomes all but impossible to debug and understand.

thanks a lot, I’m using var, postUpdate, change Math.E part and use cron timer for decrease load on system as follows:

It works, as @rlkoshak said it loads slowly when system boots for the first time, it takes about 8-10 minutes I think…after that it works

No need to make the variables global, unless you need to access them in another rule, which I suppose you don’t?

Just out of curiosity, what kind of temp sensors or service are you using that can supply wet bulb temperature, but doesn’t supply humidity measurements?

Thanks.
I think above code has problem I think in Math.exp section, I change it to Math.pow now the calculation is done correctly, Math.exp return false result.

our environment temperature is above 120 C

it takes about 8-10 minutes I think

As @rlkoshak suggested, break your maths into shorter lines, using interim variables (they are free of cost). The long parse time has something to do with how deep the “nesting” goes in each line.

LOL
No, we use OH for controlling High Temperature wood dryer kiln, the temperature profile varies from 50 C to 130C, so for example, we can not use dht22.

The long parse time has something to do with how deep the “nesting” goes in each line.

You can make it so it only takes seconds to load if you, as I and rossko57 have suggested break the calculations up. Essentially what you have is a O(N!) algorithm (N factorial or 1234…*N) to check the types of all the arguments of each line of code. So that first line is something like 7! or over 5040 operations, just to check the types. And each of the type checks likely has hundreds or thousands of instructions so it really blows up in terms of processing. The last line is 9! which is 362880. Notice how just adding two operands to that last calculation took it from just over 5000 checks to over 350000 checks. That’s over 405000 operations just to check the types are correct on those three lines of code.

That’s why it blows up so easily. But if you broke it up into multiple lines of code with fewer operands you can reduce that by orders of magnitude.

By splitting the above into separate lines we took something that took well over 400k operations to check the types down to 50 operations. That’s a 4 orders of magnitude reduction and will mean the difference between taking 8-10 minutes and less than a second to load.

In addition, it gives you more of a chance to log out and see the intermediate operations which could be logged for debugging when the calculation does work.

Finally, this rule will explode if t1 or t2 are not Numbers but are instead NULL or UNDEF or if they carry Units of Measurement. By breaking it up like this you now have one place (where the local variables t1Var and t2Var are defined) where you can check for that.

Note that changing the cron period does absolutely nothing to reduce the load caused by the rules as written. The problem occurs when the .rules file is loaded, not when it runs.