Setup, Configuration and Use Beginners
rowan.bradley (Rowan Sylvester-Bradley) August 1, 2018, 11:32am #1

What am I doing wrong here?

At which part of the Windows Installation Instructions do you experience issues?

It fails at step 3 of the section titled Installation. i.e I run start.bat, and it fails with the error messages that I quoted.

What Java did you install?

Those two lines are arguments to java.

That looks right. It looks to be a new enough Oracle Java. I don’t run on Windows so won’t be of much more help here. Most of the time the problem is forgetting to install Java or installing the wrong version. That doesn’t appear to be the case here.

Did you set the JAVA_HOME variable in Windows System Environmental Variables??

including spaces in directory names. How come they didn’t see the
interminable problems that this decision would lead to?

you may want to point to the Oracle Version 8.

It didn’t work with Oracle Java 8. So I installed the recommended version (Zulu v10). That didn’t work either, so I uninstalled Oracle. It still doesn’t work, and that’s the problem I am currently trying to solve. It seems to be missing some registry settings and not to be finding things in the directories it is looking in.

If you run java -version and it says “Hotspot” in the results it means you are running Oracle Java.

If you running Zulu it will say Zulu in the output from java -version.

And assuming it is running Zulu, you must run Zulu version 8. OH will not work with version 10.

The docs do say: “As for now, a pre-release Java 9 installation is not recommended and is not yet supported by openHAB 2.” but that probably needs to be updated to say as for now OH does not yet support any Java version after version 8.

Rick beat me to it…

I would uninstall your version 10 and revert back to Version 8. I think you might have some issues with the quotes you are placing within the system environmentals…it may be effecting the path.

Thanks for those hints. I stupidly missed that note about the version.

If I enter the full path to Java, it works OK:

What is wrong now?

It looks like you still have something referencing the Oracle install on your system or file path.

Have you rebooted since updating your environmental variables?

In point of fact I do not understand the start.bat file at all.

You say the two lines beginning -D are arguments for Java.

name of a Jat file that it is meant to execute, which it (of
course) fails to find. This looks more like a command line command
than a Java command.

Presumably this is supposed to run the file karaf.bat. What does
the %* at the end mean?

If I try to run the file karaf.bat by entering the command line:

Error: Could not find or load main class runtime\bin\karaf.bat

Presumably it is again looking for a Jar file.

If I run karaf.bat as a normal command line, like this:

Must hijack this as i can`t make a new topic ! I to have problems installed on a headless pi. that seems to go good but in browser pirefox i go to

Nice page,there is choose a packet nothing happens ! on the skip package selection only a # come in the browser adress nothing else .
second problem is if i ssh so ssh openhiab@192.168.xx…xx then it ask password i use the one in the conf openhabian and it looks that is not ok so ? Any clue.

You should really start a separate thread as solutions for a Windows installation will probably not correspond directly to your challenge.

As i dit say i could NOT make a new topic

In point of fact I do not understand the start.bat file at all.

I don’t run on Windows and never have so I can’t say the bat file makes much sense to me either. But I know there are hundreds if not thousands of users who run OH on Windows so there being something fundamentally wrong with the .bat file seems unlikely or all those users would be complaining also.

So, assuming that there is nothing wrong with the .bat file the usual suspects for problems are:

You say the two lines beginning -D are arguments for Java.

I can say for a fact that the -D are definitely arguments to Java. One uses the -D option to pass environment variables to the running application. In this case the two you point out are setting a couple of environment variables in the program to set the HTTP and HTTPS ports that OH will listen on. The %HTTP_PORT% is referring to a variable set by the .bat file, or that exists in your envrionment. If those variable do not exist then the defaults of 8080 and 8443 are used.

I just went through the steps on my Windows machine: 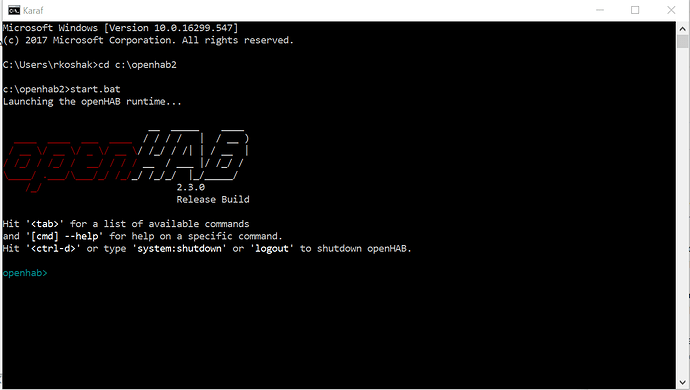 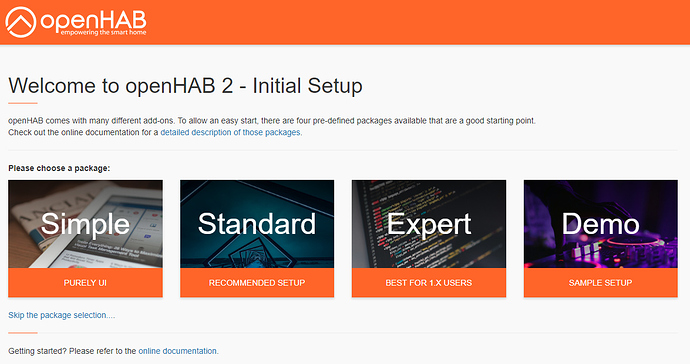 So unless you want to learn how the .bat file works, I think your time would be better spent looking at the list above for the source of your problem.

What does the line setlocal mean?

I don’t know for sure but I would guess it sets the language and perhaps the time zone and number formats and such that OH will use. So if you are in Germany all the logs and menus are in German and a comma is used for the decimal place and such.

And what does the line set DIRNAME=%~dp0% mean?

Everything in % % refers to a variable set somewhere. So this line is setting the variable %DIRNAME% to the value of the environment variable %~dp0%. And again, [a Google search tells me] (https://stackoverflow.com/questions/5034076/what-does-dp0-mean-and-how-does-it-work)

The %~dp0 (that’s a zero) variable when referenced within a Windows batch file will expand to the drive letter and path of that batch file.

And what does the line “%DIRNAME%runtime\bin\karaf.bat” %* mean?

Run the command located at %DIRNAMEruntime\bin\karaf.bat and pass all the command line arguments passed to this .bat file to that command (Google again tells me that is what the "%" means). And since %DIRNAME% was set to %~dp0~ and we now know that %~dp0% is the drive letter and path to the .bat file executing we know this makes the command c:\openhab2\runtime\bin\karaf.bat (we didn’t pass any arguments to run.bat so %* is blank.

If I try to run the file karaf.bat by entering the command line:

Why would you try to run a .bat file using Java?

Presumably it is again looking for a Jar file.

No, karaf.bat is a .bat file. This is Windows scripting. It has nothing to do with Java so Java can’t figure out how to run it. If you opened that file up I bet you would find java being called from that file.

As i dit say i could NOT make a new topic

Then at least hijack a thread that is a little closer to your problem. This thread is addressing getting OH running on Windows. Not many of the people on this thread will have any clue how to help you with your problem.

Or just wait the day it takes until you have permission to start a new thread, assuming that is your problem.

when i used too run on wiindows you had to start the start.bat as an admin or i got error messages and KARAF could not start im not sure if this helps just posted just incase