Today I found a solution to integrate spotify in my multi-room audio setup, as it took some time to get it working I want to share it here. But let me present the whole system. It is modular and can be realized with any hardware and only free software (except the spotify client).

Here is the outline:

The main advantages for me of this setup are:

Here is a scheme of my actual audio setup: 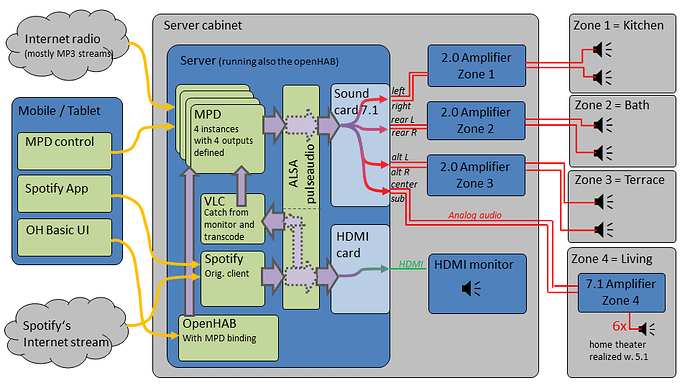 The re-mapping of the 8 channels is done in alsa ( /etc/asound.conf ):

The mobile phones run MPD control as clients. We like the easy access to the outputs. Most other mpd apps hide this well, and thus switching of zones becomes unpractical.

The server runs the normal spotify linux client and its output will go to the default audio sink (here alsa’s pcm.!default), which is mapped to my second sound hardware - the HDMI card. Normally the speaker is muted by the monitor hardware, thus the music can not be heard in the server cabinet

. The audio from this soundcard is looped back into an mp3-stream that the mpd’s can use as a input. I found this solution in the internet:
The command:

shows device name to use, for me alsa_output.pci-0000_00_03.0.hdmi-stereo.monitor
A streaming software like VLC can form this into a stream file, e.g.:

Other VLC transcode options should also work. My mpd plays back the stream from http://localhost:8005/spotify.mp3. I experience a delay of roughly 1-2 seconds between an action at the spotify app and the audible speaker output. This is OK for me, because all four zone outputs are in perfect sync and will be like this, ever!

What an awesome solution!!! Just one question. How do you control which playlist or song you play from Spotify?

To control Spotify I use the Spotify app on my smartphone and just choose the server as a remote output. 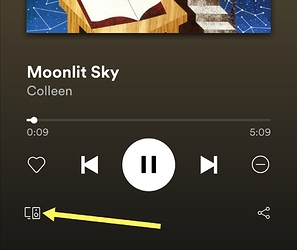 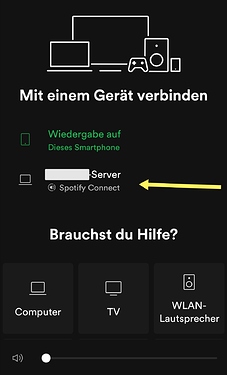 Thanks!! I’ll have a go at this, but I’am not sure if the Spotify client will run on a raspberry pi!

Hi, this is impressive. I have been looking to setup something like this. One question I have is whether it is possible to play 2 different Spotify instances at the same time to different zones. I think this would amount to running 2 Spotify client next to each other, I just don’t know whether this is possible.

To be fully honest, I had in mind running a Spotify client per zone so that the zone can be directly selected from the within Spotify app.

Thanks a lot for posting this though!

Props to the OP!

When i’ll have my own house this is the type of projet i’ll do.

I don’t know. We have only one spotify client running. So far there was no need to run multiple instances. I still use the dirty hack to loop the spotify output through a sound card device and grep it with VLC. If you can find a way to connect to a spotify stream directly it will be straight forward. Probably you need a premium / family account to do this.

thanks for the reply. I do have a Spotify family plan. Do you mind sharing What 7.1 soundcard you have been using and weather you are happy with it?

I use a similar setup. But with the Logitech Media Server instead of mpd, which has a plugin for spotify that works great with the 5 accounts from the spotify family membership.

I have one centralized server and 5 airplay speakers. all can be adressed within logitech media server, which has (in my point of view) a very old and bad looking gui. But so far it just works an there is a binding for openhab as well.