Chromecast audiogroup has an "elected leader" and it keeps changing

Furthermore, I’m not sure if this is related as well https://github.com/balloob/pychromecast/pull/167

I opened an issue #5564 for this problem

I think this problem still exists as of 2.5.

My current solution is as follows:

In rules that need to broadcast to audiogroup:

@cweitkamp, my suggestion would be to allow the audiogroup thing to specify multiple ip addresses, and the binding can automatically pick whichever one that’s online. What do you think?

Thanks for catching up with this topic. Just want to let you know that I saw your message. I recently added another Google Home device to my setup and will create a group for testing as soon as I find some time for it.

I like your proposal to add a list of potential IPs for the groups. But not as configuration parameters rather introduce meta tags for them. Maybe it is possible to populate the list automatically to simplify the users life.

Any news for the behavior and solution?

hi Jim, i created new rule file “chrome.rules”, its giving me below error when i save the rule file:

can u help with this… i have two google mini’s, so its two groups only, below is the rule code:

My rule is in Jython, not RulesDSL. You’ll either need to translate it into RulesDSL or use Jython instead. See https://openhab-scripters.github.io/openhab-helper-libraries/Getting%20Started/Installation.html

There is a chance to solve the problem. I use the groups to carry out alarms (doorbell, X Y calls on the cell phone, open windows …) throughout the house. But this only works sporadically at the moment. I would also be available as a tester, I have 10 Google Home, a Chromecast and an Android TV in my network.

Sry for coming back to you with such a delay. During my recent work on the binding I tried to figure out a solution for this problem. I did not find a solution yet but I found a workaround. In the beginning I added all my audiogroups via textual configuration file. And after a short time I experienced the same issue. I setup a separate test environment and again added all my audiogroups but this time using the auto discovery feature of the binding. And this time it was working nicely. The discovery automatically changes the IP address of my audiogroups. That is one of the supported discovery features. On the opposite the discovery is - of course - not allowed to change configuration of manually defined things.

For auto discovered things it is not possible to change the thing id. What I did not test is adding the thing manually via Paper UI. I am not sure if the same discovery feature is applied for them. But then you have the change to rename the thing id.

I know that it is easier for humans to have a meaningful thing id but the framework does not care. Rule and Item files can be change by find & replaced in a second.

However, the discovered audiogroup when added as a thing, kept having the ip address of .200 and hence it is OFFLINE. I tried deleting this autodiscovered thing and re-adding, and it now kept reverting to that .200 and therefore stays OFFLINE. I have not changed its ip address manually.

I auto discovered the audio group using OH3 UI and the IP address and port did change after a few days: 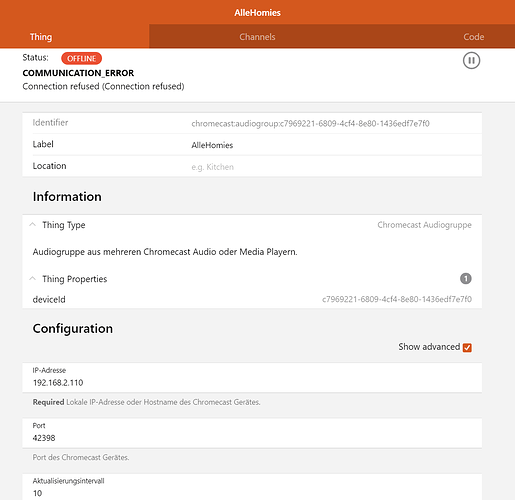 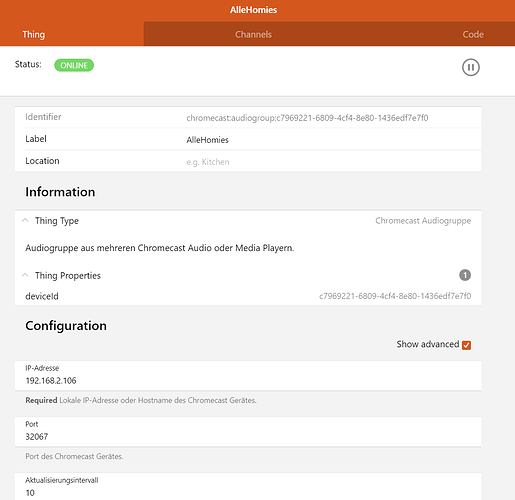 I auto discovered the audio group using OH3 UI and the IP address and port did change after a few days:

I encountered the same problem, on OH3.

I have been observing this problem with OH 2.x for quite some time. I assign a fixed IP address for my Chromecasts and the port for the audio group changes from time to time. It is not understandable for me.
Apps like BubbleUPnP, Audials or PowerAmp have no problem to work with the changed port of the Chromecast audio group. This is a very very annoying thing …

It’s always been like that, I’ve been using Chromcast for 3 years and I’m annoyed about it. Unfortunately in OH there is no way to enter all IP addresses of the group. While looking for an old discussion on the topic, I just discovered this discussion
https://community.openhab.org/t/solved-oh2-chromecast-binding-audio-output-on-multiple-google-home-mini-at-the-same-time/36737
and will test it right away.

Okay, that doesn’t help either, there is also overlooked that the IP changes after a day or two.

hi guys, below example for two google mini, u can add as much as u want… please set fixed ip for the google mini’s from the router… google it… fixed ip per mac address