Hi,
I am having a potentially stupid question regarding blockly scripts.
For my blinds I have to check if the current time is before midday or after. I have installed the time extension.

However I cannot seem to find the correct blocks to get this easy operation done.

It should just be

Is there an easy way to do that?

Thank you very much in advance.

as always, there’s multiple approach to this.

you can either use the current timestamp, extract the hours from it and then compare that.

or you can look around in the tutorial, and in the end you only have to configure Rich’s template from the Marketplace…

With the introduction of the Marketplace for rule templates I thought it might be a good time to show how one would use rule templates, not just by themselves but together to build up a fairly complex automation without needing to code anything at all, or minimal coding. In this case we will implement a simple version of [Deprecated] Design Pattern: Time Of Day using Alarm Clock Rule and To Today. In short, we will create a time based state machine that commands an Item at the beginning of a g…

Thank you,
I will look into it this afternoon.
Although it seems pretty complicated for the simple check that i require.

Although it seems pretty complicated for the simple check that i require.

if it’s only one check it sure is a bit of a overhead, but I’m pretty sure, that “time of day” will regularly com up as your openHAB grows.

or just use hafniumzinc’s solution - I don’t know blockly, but apparently he does!

I already have a time item called midday which is derived from the astro binding but includes a date and not only a time. Can I just use this item or do I have to define a new item which includes just a time?

Can I just use this item or do I have to define a new item which includes just a time?

Try it and see what happens! now has both date and time too.

But it does not work.

But it does not work.

You’ll have to provide more information than this.

Put some logging blocks in to see what state your various Items and variables are, and logging blocks inside the If results so you can see where the code has gone. Then monitor the logs as you run the rule.

EDIT: Looking at what you’ve got: you’re giving the comparison block the Item name, not the state of the Item. You will need to try with the Item state, and you may have to assign that state to a variable first.

Oh yeah, that makes a lot of sense.

now I seem to have a different problem. I am raeding through other posts as well and see the set varable to block a lot (the first one you used in your example) I however cannot find this block in my blockly. Does it come from a different library?

Your help is very appreciated. I am moving my whole smarthome from domoticz to openhab and while openhab has a lot going for it. The coding is quite different and the learning curve is rather steep especially knowing how i solved the problem before and not being able to replicate it.

Another small question. When I construct this script under the script section I cannot call for it from a rule. I always have to write a new script in every rule i create. is that correct? seems a bit strange.

the set varable to block a lot (the first one you used in your example) I however cannot find this block in my blockly. Does it come from a different library?

No, it’s there by default. But you have to create the variable first. 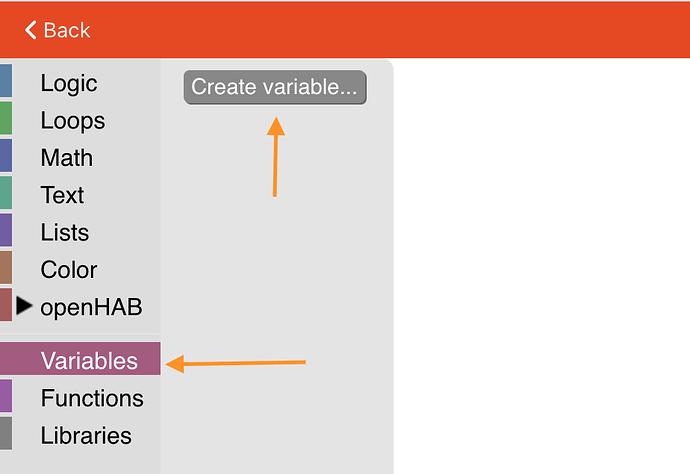 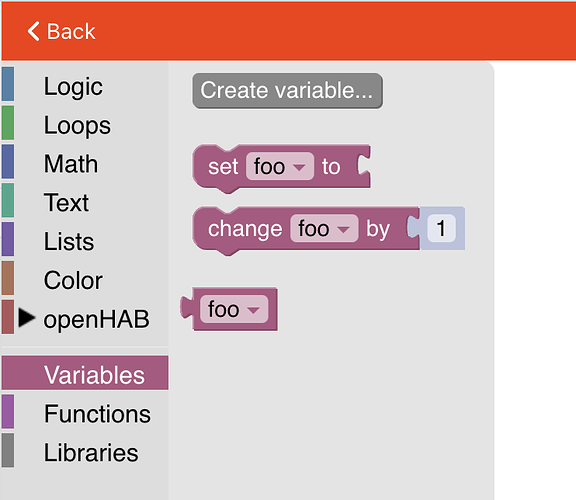 Another small question. When I construct this script under the script section I cannot call for it from a rule. I always have to write a new script in every rule i create. is that correct? seems a bit strange.

No, you can call a rule from a rule. A Script as shown in MainUI is just a rule without any triggers or conditions and a single Script Action. It would probably be helpful for you to go through the Rules section of the Getting Started Tutorial (Rules - Introduction | v3 Documentation Preview) which is awaiting merge into the official docs. 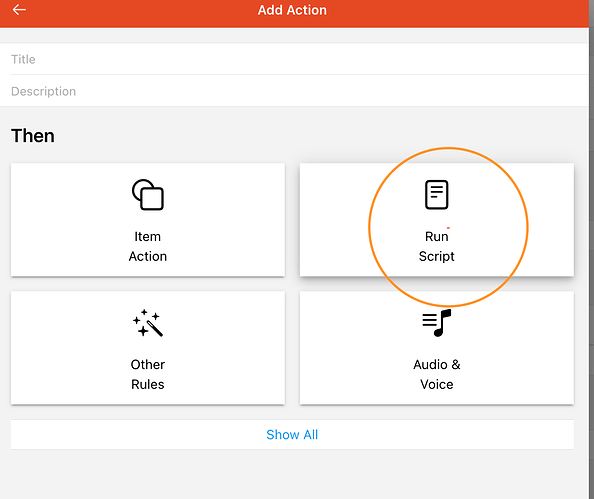 But, usually the best approach in OH when you have a lot of rules that run the same code just on different Item events is to have just the one rule to handle them all instead of duplicating the same rule for each Item, even if those just call the same Script.

Although it seems pretty complicated for the simple check that i require.

You never have to mess with code at all beyond coding what you want to have happen at that time.

Does it come from a different library?

No, it’s standard. Go into the Variables group, create a new variable, and then the Set block will become available.

I started to alter my rule starting from your example.

My problem now is that when I set a variable to an item coming from the astro binding the time and date is in a different format than the now coming from the datetime library.

I added two examples. The first one works.

The second one outputs an error which i guess is due to the different format.

Is there a possibility to solve this?

i figured it out.
This one works

And here is the final rule controlling my 12 blinds.
The values can be a bit fine tuned but the concept works.

The actual commands have to be set to where the log outputs are right now.

Thank you again for your help! 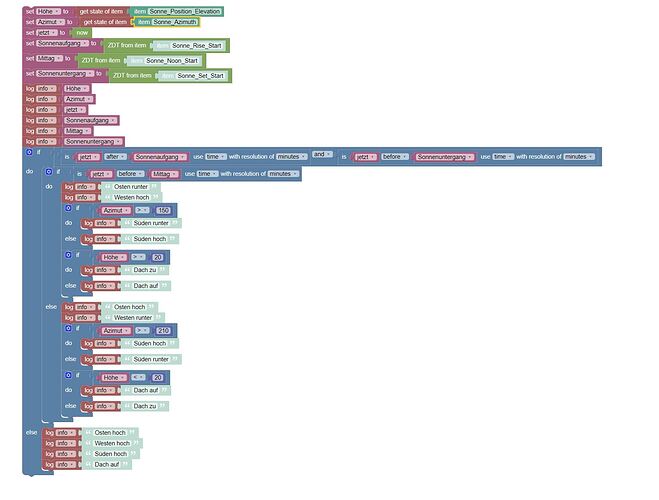