This is a bit of a weird question.

Philio PAN06 – or at least, the version I have – has two endpoints, but is able to send only one report.
Something like this:

Now, you can decide if the report should be sent for both endpoints, or only one of the two.

Until some time ago, it was possible to do that in OH.
However, now that is no longer working. I suspect this has something to do with forcing the controller on the lifeline, which in the case of this switch means “send a report on change of any of the endpoints”.

To be honest, I am not sure that this is a bug in OH. The weirdo here is the switch.
That said, I need to make such configuration change. Do you know any other tool to configure association groups for a node?

If I remember correctly (which I might not), these devices have a problem in that they don’t support multi channel associations, and therefore don’t encapsulate events in the MC command class, which means when you receive a notification, you can’t tell what endpoint it came from. I don’t think there is a way around that.

The problem is that since around 2.5, there the first association group is forced to the controller. Usually it is the lifeline, so it’s actually a good safety net. But for this device, this is not really working.

Again, I am not sure that supporting this weird behavior is really worth (unless it’s just a matter of quick configuration); but it would be nice to have some alternative way to configure the switch. 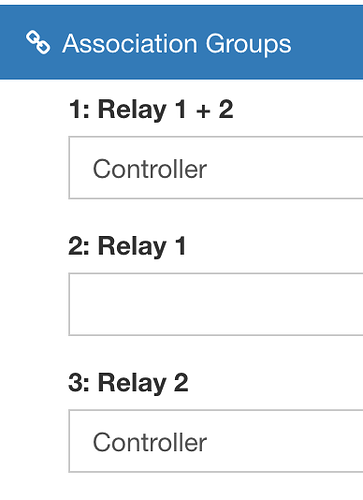 The problem is that since around 2.5, there the first association group is forced to the controller. Usually it is the lifeline, so it’s actually a good safety net. But for this device, this is not really working.

I can do that.
Where can I find a guideline on how to update the database (including testing locally)?

So, I was kinda busy last couple of months, but finally I got the time to have a look at this.
It looks like the “defaultAssociations” node should be empty.
I have gone through that dcumentation (thanks @Bruce_Osborne!) , but I could not find how to test it.

Let’s say that I download the XML definition from the database, and then alter it. Before going further, I would like to ensure if that works correctly.
How can I test it on my own OH instance?

I think this method still works.
Modify a zwave binding jar to add/change a zwave device while waiting for a build - Tutorials & Examples - openHAB Community

Will give that a try, thanks!

I am not sure if I tried in the correct way, but it did not work.

What I did
The idea was to remove the defaultAssociations property. From the code, it looks like that without it, it should no longer force the lifeline as an association.

However, I could not really test.

Now, I am not sure if my approach is correct; or if there is something else that should be touched; or if there was any flaw in my test.
But I cannot validate the change, and I do not know what to do next to have it “working again”

I tried even hacking my way around, changing the Things,json and changing the association groups there; but with no success.

Any hint how to proceed?