there is a weird little idea spinning in my head for some time. In the past I’ve played around with Xibo Digital Signage System. It’s a neat open source project with a solid cms to manage static and dynamic content for monitors do display. It has a nice and stable Android Client.

For some time I use a AwTriX-Display in my kitchen to display several openHAB-related stats like the current efficiency of our solar panels and some other stuff. It gets its commands via MQTT.

I would love to realize something like that with Xibo. Meaning: I would switch the LED-Panel for a (A++) Display with an Xibo-Client attached to it. Then I would prepare some layouts (e.g. with Grafana-Sheets, with pulled camera images …).

What I need to find out is whether or not it is possible to control the system with Openhab via the API-Interface. Do you see a possibility for that with “reasonable effort”.

Thanks for your input.

The more I think about it, the more I like the idea of a monitor for my openHAB-Setup.

If anyone is interested in this as well or wants to give me some hints, I will now dive headfirst into the concept of creating a Binding with a RESTful API for that purpose.

The “old” LED-System can use an upgrade.

Okay, so maybe a Binding is not the way to do this. And this is way above my skill level.

Xibo itself is working nicely with the grafana-charts and the video-output from the ipcamera binding. 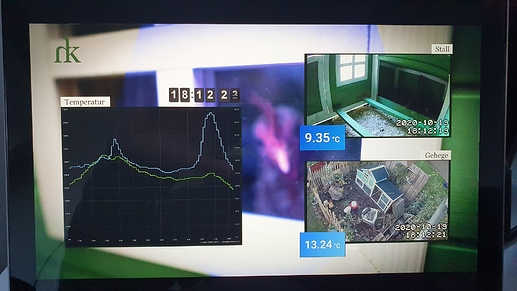 I’ve successfully messed around with postmaster and the API, but I don’t know how to implement this in OH. The problem might be the authorization via access-token. The CMS with the API is running in another docker-container.

I have absolutely no idea how to realize the authentication between OH and the Xibo-CMS. In the documentation there is s.th. mentioned, that seems to be perfect for my use case.

Xibo supports dynamic signage through the use of software triggers. These are triggers initiated by the CMS and pushed to targeted Players for immediate action. Software triggers are a flexible way to connect Xibo Players to devices or software so that actions are taken in real time. A good example of this is an integration with a POS system that triggers a new Layout each time an item is scanned into the POS terminal (up-sell advertising).

Translated to my use-case:

Can anyone point me in the right direction?