Good Evening alltogether! I am looking for somebody who has a working CUL configuration with the busware CUL stick under windows running.
I have build my own CUL stick and I am able to detect whether my remote control is sending, but only under my virtual linux machine. The signals diplayed in the terminal windows looks not 100% accurate, but at least I can detect something sent from my intertechno remote control. When I connect the selfmade nano CUL to the USB port, it is flashing with the correct period and also the communication and the firmware version is displayed correctly.
My openhab configuration has some RWE devices, a MQTT server, some ESP8266 sensors and thats it. I really would like to have the CUL running, to be able to control my intertechno sockets.

I have build my own 433 MHz sniffer with an arduino, to be able to detect the sent data, but nothing is sent via my CUL.

I would be happy for any feedback, specially for windows. (Everything I found was just linux) MAybe my CUL module is faulty and I only need to order the original CUL from busware…? I have two c1101 modules connected to the arduino nano, but both have the same problems.

Hi Ottoson
have you checked the communication settings of the COM port?

Dear Robert, i checked the communication but i think now, that the problems were caused by my two c1101 modules. Even when I was not sending anything, continuously I was receiving strange signals.
I have ordered now a cul from busware and use it under my homematic ccu2. This is working fine and i have not tried it again with the windows pc. Anyway, I am still sending the commands via openhab to my intertechno compatible socket dimmer. This seems to be a good solution for me so I am not planning at the moment to change this.

Thank you for the feedback, you have been the first person answering me.

Do you have the cul running under windows?

Hi Frank, although I’m not a hardcore Linux user, I only use openHAB on my Raspberry running Debian. In earlier times I was used to DOS - so, the basics are clear to me and the rest I find on the web.

Therfore I don’t have experience with CUL under Windows. But problems like wrong baud rate are always the same, no matter which OS

I did manage to get the CUL running, but not with my own “arduino based model” but with the model from CUL busware.
However, together with the CCU2 of the homematic system, I am able to control all intertechno sockets and dimmers now.

Thank you for your help!

does this PI module replace the CCU2 and work with Homematic or Homematic IP directly?

I use the CCU2 from homematic and the cuxd Software controls the communication to the cul module from busware.

To have the status of the dimmer alway correct, it is important to use the right dimmer module. Some dimmers only have one command for ON and the same command for OFF. The dim function starts by pressing the standard remote control continuously. This means that with every command you send from the cul you switch the dimmer on or off, but dimming is not possible.
I am using the dimmer from company DÜWI - DUPID 300 which have a discrete command for on and a discrete command for off. To start the dimming, I have a switch with three positions, ON - DIM - OFF

DIM and ON have the same command, so at least you are aware that the dimmer is on or off any time… 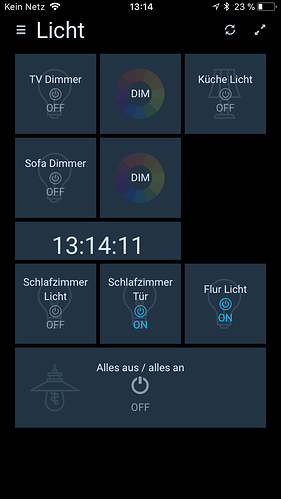