Hi, running on the latest stable OH version and I have the problem, that the Daikin binding doesn’t report the correct indoor and outdoor temperature. Can’t tell what adapter I’m running. Is there a way to find out which one I do have without dismantling the AC?

Earlier everything worked fine - but a while ago I noticed the temperatures are not okay.
Everything else works fine, e.g. switching on, setting a temperature or mode.

Here are my items:

Am I really the only one having this issue?

On the Australia Airbase controller - Outdoor temperature doesn’t seem to be reported at all. The controller reports - not a value.

For the Indoor temperature, we (Openhab) can only report what we get from the controller.

The outdoor temp is only being reported when the device is on. When it’s not running, there is no outside temp available. At least it was so because now all my temps are either not available or stuck at a temperature from months ago. I’ll open a ticket on github, thanks!

Found the manual: the adapter is a BRP069A42

Is the Daikin binding still being maintained?

[Daikin]: Inside and outdoor temperature not reported anymore

Expected Behavior I expect the indoor temperature being reported always correct and the outside temperature when the device is turned on. Current Behavior It... 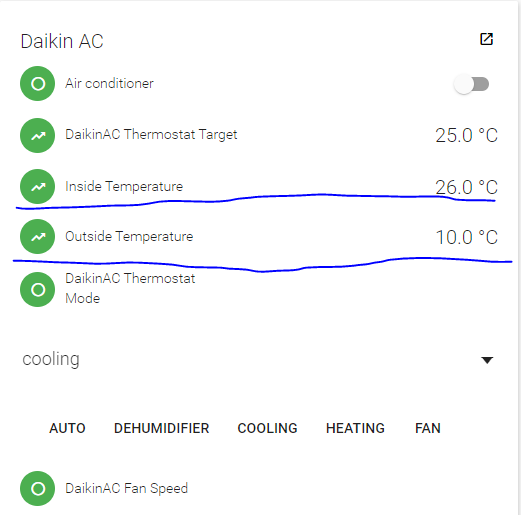 Hi There,
I also have the problem. I have a BRP069A81 adapter which works fine with the binding but the indoor temperature is different from the one I read on the controller of the unit (BRC1E53).
I have updated the BRP069A81 firmware to the latest version but nothing changes.
Did anyone understand whether the bug is in the adapter firmware or the binding?

At least on the Australian ducted units, there are two temperature sensors - one in the return air vent, and one on the wall controller. The binding can only report on what the Daikin hardware reports. The Daikin app will almost certainly show the same as the binding, as they’re using the same API to query it.

Understood, thanks. BTW do you know whether daikin temperature controller is using the return air vent to adjust the inverter frequency or the wall controller temperature?
thx

I think it depends on the model of the Indoor unit. Our holiday house had an ~13 year old unit where no matter what settings I changed, the temperature from the Airbase was always from the return air vent.

We replaced that unit a few months ago, and now the Airbase respects the settings on the wall controller - where I can specify the location of the temperature sensing (ie wall controller or return air vent).