Ok so currently my DSC Alarm binding is mostly working using the IT-100 in Openhab2.
I can see when zones change state from open to close and close to open ect. Can even ARM the alarm in either stay or away mode.

When I try to disarm the alarm (doesnt matter if it is in stay or away mode). I get these in the logs:

So in Openhab 1.8.2 the disarm only worked when supplying my user code in the config file, in openhab.cfg like:
dscalarm:usercode=1234

Now I am not 100% sure how I debug this via Openhab2, since I don’t see the communication directly myself, but whatever is happening, its as if nothing is happening, and openhab2 just sets the alarm mode back to stay or away depending on what it was. Presumably getting update poll data back.

ps. ping 123 is for illustration purposes only.

The dsc.py file is just so that it works out the checksum, so that I dont have to manually do that when sending testing commands directly to the IT-100.

To set debug level in OH2:

To set debug level in OH2:

So it uses code 1234 even though I have a different code configured in my .things file. Hmmm.

The user code is used by the panel not by the bridge, so you would need to define your panel thing with the userCode parameter like so:

The userCode parameter is a Text value so the quotes are needed. Hope this helps.

The user code is used by the panel not by the bridge, so you would need to define your panel thing with the userCode parameter like so:

The userCode parameter is a Text value so the quotes are needed. Hope this helps.

Thank you that solved my issue.

Dear Mr. rsstephens:
I also don’t know how to disarm with usercode.
I set up the DSC via TCP client,and OH2 discovered it for me ,so I linked it as a thing.
Now as I am new to OH,so I set up the binding according to this page.
http://docs.openhab.org/addons/bindings/dscalarm/readme.html#channels
I just modified the> Switch BRIDGE_CONNECTION {channel=“dscalarm:tcpserver:ee5a8012:bridge_reset”}
and it works besides the icons.
I can set the security system to Stay and Away mode, but the Disarm button not work.
I don’t see anything in things folder under /etc/openhab2/.
so how to set the usercode ?
thanks for your reading.
I use Pi3 ,and I also don’t see any log file in /etc/openhab2 also.
please help me .

Since you added the bridge through discovery, you will need to enter the user code in the PaperUI on the ‘panel’ thing configuration page.

Thanks rsstephens
I still can’t find where to input the user code . 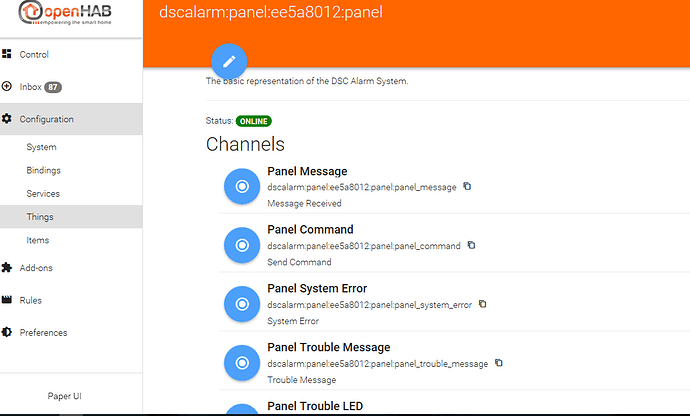 Can you tell me what is wrong? I am trying to get familiar with openhab2:confounded:
thanks for your help.

You’re almost there. Click on the blue circle icon with the pencil in it, to edit the configuration parameters.

I have a question, are you using an Envisalink adapter on your DSC alarm system? If so, you should be using the Envisalink bridge, not the TCP server bridge. Those errors messages probably mean that some thing handler isn’t getting initialized and isn’t ready to respond to the messages.

Thanks.
Ohh yeah, I found the user code area.
Nope, I use a tcp to serial module to connect with IT-100,not Envisalink…
http://www.usriot.com/p/4-ports-serial-ethernet-converter/
So I think I should use TCP server . 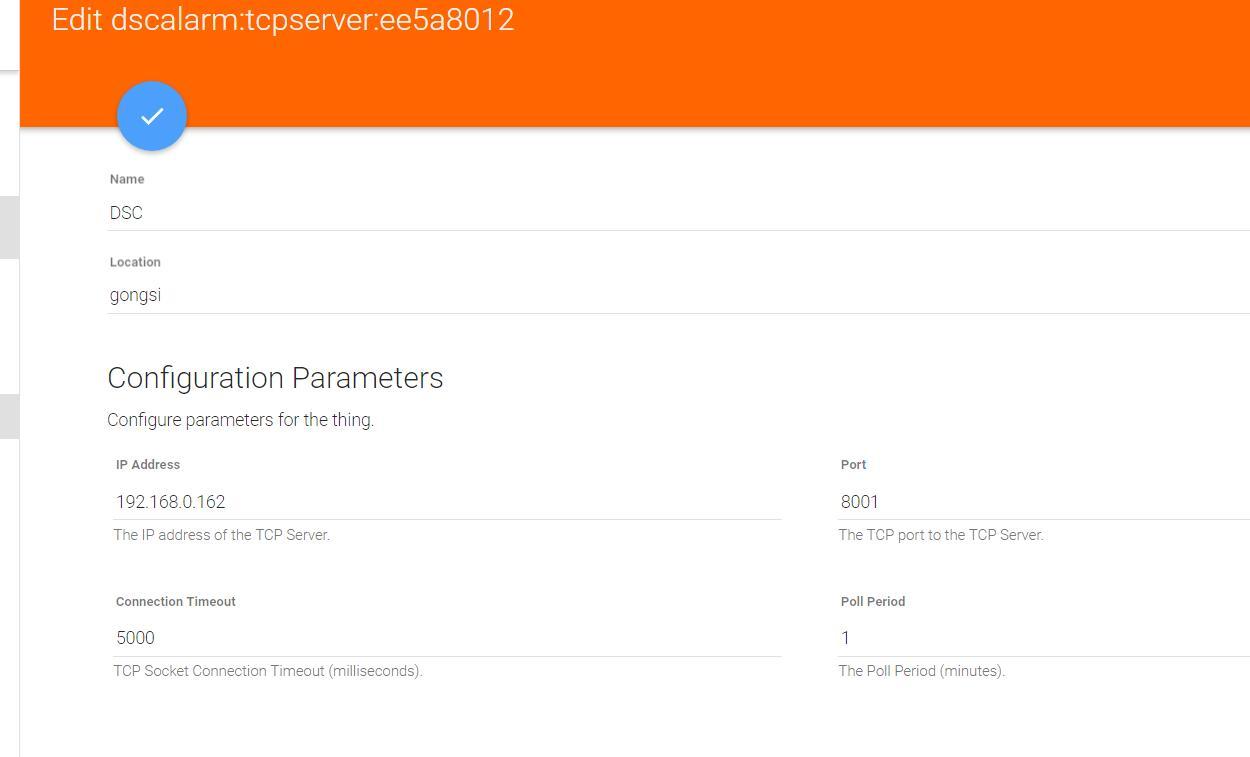 Hi,
would you mind to share the .things .items contents?
Facing the same issue, however not sure if I understood this parameter.
thanks!

Glad you have it working, Xie!

This is the things file:

And this is my items file:

I haven’t updated to the latest version of the binding, was busy with other projects and my OpenHab is working without issues at the moment, using the andoid app to manage it daily without issues, specifically the alarm arming and disarming.

The binding is working flawlessly since I installed it and linked it to my Envisalik4. Great work.

Just a headsup on the documentation which says that the user code on the panel isnot required.

Without using the code for my own panel I could not disarm the system, but when I use my code there I am able to disarm it.

Perhaps that’s a phrasing thing. More like “not mandatory”? As in, you can use the other features without a code but not disarm. Some people would NOT want to make their code visible in an internet connected system, nor have it capable of disarming their alarm.

Some people would NOT want to make their code visible in an internet connected system, nor have it capable of disarming their alarm.

This is pretty valid. I may disable the functionality, I still need to think about that. However I do want to be able to send a command to disarm the system via a rule. Every morning someone has to remember to disarm it manually, so it may as well be automated. Would you happen to know what that command would look like?

Of course the code will still need to be stored (in the rule in this case), but it is a pain turning it off manually very morning.

Would you happen to know what that command would look like?

Also, the DSC panel has auto arm and disarm capabilities if you don’t want to use a rule to do it. I have mine setup to arm and disarm automatically at certain times. This is programmable from the keypad.

It certainly does help thanks Russel, and hopefully for anyone else looking for that functionality.

This binding is a very useful integration with a DSC system. Excellent work

I wonder if you can help here. I’ve applied the command and have been testing it with a cron timer in a rule, but it seems that the command is not beingparsed correctly (if that’s the correct term ):

The actual code has been replaced here with 1234. Is there any config perhaps I’m missing? The system does not disarm.