My lighting control system “Vantage” will report button states via TCP, the same way I am talking to the system…

So if the system broadcasts

I want to be able to update a switch in OpenHab as being on.

Do I write this as a rule or as something else? If the switch was called HALLWAY how would the syntax look?

All help much appreciated.

I think you can do this all within the Item binding config. It would look something like:

vantage.map would contain an entry for each device along the lines of:

Note: You may need to experiment with quotes in the map file because of the spaces.

Rich - Thank you for your continued support.

I think I am close but missing something…

This is the item I have created.

When I click the switch, the lights come on and I can see a response from the Vantage lighting control system come back to OH. (FYI-The return code I mentioned in my previous post was incorrect…its not RGS, it’s SW) I see an error, stating that it could not find a mapping for the return code from Vantage. What’s strange is that it’s referencing the MAP file for the outbound connection, not the inbound connection.

As you can see in the ITEM above, the outbound mapping is done through 90.map while the inbound mapping should be done through m90.map. The m90.map file is in the same directory as 90.map yet it seems to be ignored.

Here’s a post from the log…the map file is highlighted in yellow.

I’ve no idea what is going wrong. Frankly, this is one reason why I tend to avoid Items with lots of binding configs. I usually set up separate Items, one for incoming and one for outgoing and a proxy switch. Then I use rules to keep everything in sync. It is a lot more code but it is way easier to troubleshoot problems.

Thanks for your thoughts. You’ve really helped me with most of the challenges I’ve faced learning OH.

Can you point me in the direction of a proxy switch example I could copy and deploy?

As a guy who's written code for a living for 35+ years, I appreciate the "mother of all rules" post on the wiki and the discussions here which use groups for reduce lines of code. But I've not seen too much on doing systematic coordination/orchestration of automation events and design patterns of logic for same. So, I offer the following. This starts with my particular use case involving a Light in my kitchen. There's a switch in the room to control the light, as well as a motion senso…

This is the original posting and perhaps a little complex for your needs.

A Proxy Item is just an Item not bound to anything. So you would have:

I have copied the code sample above and am getting an error in OH designer when I created a rules file.

The error description is:

Can you give a bit more guidance?

Also you stated earlier “only use HallwayProxy in the rest of your rules” I’m not following you…are you stating to use that for all of the other lighting switches? Sorry just a bit lost.

What really makes no sense is that the postUpdate in the next rule shows no error. Odd.

Again thank you for the continued support. I apologize for taking some time to get back with you, but I was called to Rio to assist some of my broadcast collagues with a couple of technical challenges…

I made the change you reccomended above to HallwayProxy.state.toString which eliminates the error message in designer - but I still am having an issue with OH processing the message that comes back from the Vantage system. For some strange reason it wants to apply the outbound mapping file and not the incomming mapping file.

Just to make sure everything looks legit, here is my item file:

Here is my sitemap:

And finally the rules file: 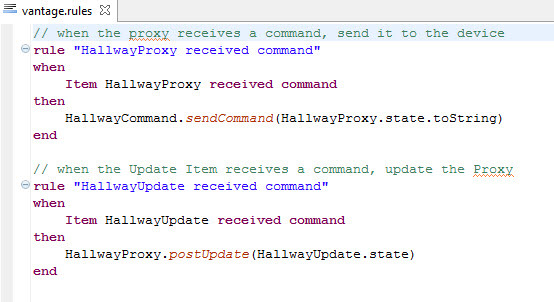 And just to make sure…here is the file structure: 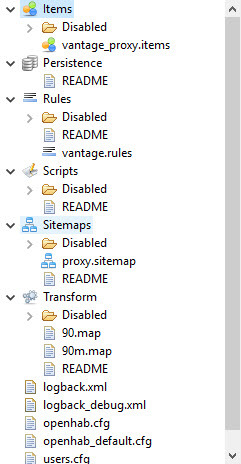 Can you see any reason why the inbound traffic is getting read by my ourbound map??? Is there anything I am missing here?

Once again thank to the great community for your assistance!!

Add some logging to your rules just to see if there is somehow an interaction between the rules we are not accounting for.

It isn’t satisfactory, but try just using the one map file and put both sets of mappings in it and see if that works. That might fix the problem, though it won’t tell us why it is working wrong in the first place.

Are you sure the > and < are the right direction (I think they are but when it doesn’t work, question everything)?