Exec-Binding on Paper UI with openHAB2

I’m running openHAB2 on a Raspberry. I’m trying to get a sh.-Script running with the Exec-Binding over the Paper UI without any rules,…

What i’ve done so far:

Anybody any idea why the script will not run? 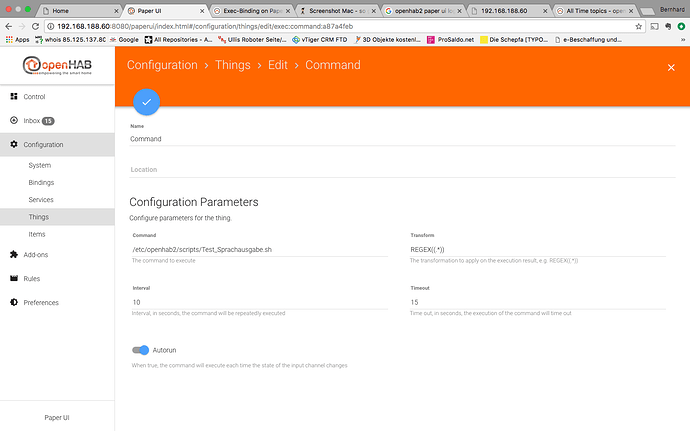 So what’s the script?

It was just a simple espeak-script to be executed.
Must have to do something with the audio-rights on UNIX…

Did you reboot after adding openhab to the sudoers? Have a look here.
What information is desplayed when you run the skript as user openhab?

Does that run? if yes then you could try to, add a rule to display what is prompted when the skript is executed.
Bind an item to the output channel of your thing and log the returned information of the execution.

You can then see the output in the log files or in the karaf console.

with user “openhab” i only get…

If i execute my skript this works fine.

If i try to execute it without making it executabel in both cases it does not execute.

Making it executable and it runs.