I’m planning a heating control system using a Fibaro FGS222, but as I don’t want to risk getting frozen because of my openhab being down, I intend to keep my current (analog) thermostat as a backup. The idea is to keep the thermostat set at a very low temperature so it’d never fire, but connected to the output of the fibaro so it can prevail and force the heating ON in case the Fibaro eventually stops working. Am I risking any damage to the Fibaro for applying a voltage (at a very low power, anyway) to the output of the relay when it’s switched off?

Err I didn’t understand by your description what you want to do but you shouldn’t apply current to output ports, any circuitry to do that would be considered to be electrically broken.

I have a similar setup with my pumps. They used to be controlled by the heating controller, I’ve inserted a FGS222 (controller connects to FGS input port, FGS output connect to pump).
Now I can turn the pump on/off from within OH, meanwhile the original control continues to work in parallel (and even so if OH is down).
See if you can apply that principle to your setup.

I really explained myself poorly. I think I have in mind the same scheme as yours. My doubt was if it was fine to shortcircuit the input and output of the Fibaro with a parallel relay (the analog thermostat), which seems to be your same configuration. Of course if doesn’t imply applying any current to the output, on the contrary it just means the voltage between the input and output of the Fibaro would be zero. Thanks @mstormi.

No! If you read that from my post then I explained poorly.
From the electrical perspective, it’s serialized, right to avoid any current in backward direction.
Power to the thermostat should be taken off the FGS (the thermostat is to be attached to the FGS just like any switch).

Ok, I drawed a very basic scheme so we can understand each other. Considering that the heater is ON when the circuit between both control pins is closed, would it be like this? 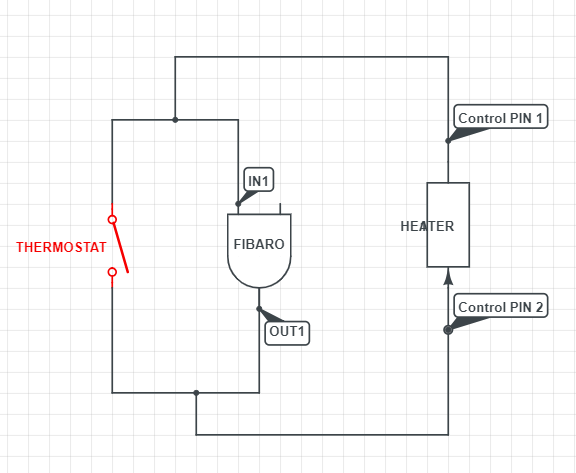 No that’s your idea and electrically incorrect.

I’d’ connect both lines from the thermostat into Sx and S1 (switch input of FGS) and lines from/to heater connect to FGS output Q1 and N (the FGS should also be connected to N).
Note that won’t work when the FGS breaks but it’ll still work when OH is down.

I think I didn’t understand you because I didn’t know a Fibaro could behave like that. In my experience, a Fibaro switch input only triggers a state change, but doesn’t define it (and you can’t even check the real state of S1 from OH). For example, in this hypothesis:

That isn’t a problem when you have a light switch and position doesn’t really matter, but unless I’m missing some option in Fibaro config, I think it wouldn’t be useful in my case… Of course you’re good if OH stops working when the thermostat is in the same state as the Fibaro, but otherwise… how did you solve that?

You mustn’t configure the FGS to toggle on switch input like you would do for monostable switches, i.e. “pushbuttons”. Rather use the default config (suitable for common bistable switches).
Referring to your example, if the heater is set to on (via radio command) and the input is still OFF, there’s no power going from Sx to S1. If the thermostat switches ON that’ll apply power. In bistable mode this is equivalent to “ON” but since the Q1 output already is ON the FGS won’t change anything.

Reading the FGS 222 documentation I didn’t think in bistable mode you could set via radio a different output value than S1:

But if you say so, then it’s no problem, that’s great. Anyway, so we don’t confuse anybody note that the default is the toggle behaviour, not the bistable. Thank you very much for your help.