Until you’ve had a chance to get to this, I reckon I should be able to workaround the problem by using tail/awk to monitor the logfiles and trip an openhab switch when the device sends the BASIC_SET command. Will post that on this thread when I’ve got it working, on the offchance anyone else has the same problem.

Ok, thanks. Are you using the development version, or the snapshot?

Ok, thanks. Can you try deleting the XML for this device, reinitialise, and send me the log of the init? I think that by setting the multi-channel lifeline association it should enable multi-channel messages - I’d like to see if that is being set or not…

If you have the opportunity, give this version a try. Delete the XML for the node so it reinitialises…

Doesn’t seem to make a difference. I attach the log with the reinitiatisation and a couple of test transactions, and also the XML

Thanks - I’ll take a look at this later.

The log doesn’t show any initialisation. The device is showing as failed by the controller, so it hasn’t yet initialised it (hence there’s no change in function). Probably waking up the device will sort this and allow it to initialise (I plan to change this logic in the near future).

oh, I assumed that if a new XML was created there must have been initialisation. I’l have another go!

Yes - that is a valid assumption, but the log doesn’t have the info. Maybe it completed after the log was sent ?!?

There is some in here, but not the full log.

Thanks - will do. I’ve been trying to avoid dumping vast logs on you, but looks like I’m no good at that…

Vast logs (well, reasonably vast) are fine - up to 10 to 15MB I can handle in the log viewer and really once they are in there it’s pretty manageable…

staying in the queue for FBS001 fix

Happy to help with testing/logs as needed

So here’s my temporary solution:

add the following into crontab:

then (making sure the expire binding is installed) the following item:

Obvious disadvantage is you can’t use two inputs - my dumb solution for the moment was to buy another fibaro device.

Had to set them multiple times, one at a time and restarted binding/openhab several times.
Strange thing is that after a restart, coming back to openHAB; both entries are empty, but inputs still work:

3: Controller updates; which is the one I really want for reporting scenes, is not possible to set, ever. HABmin only mark it as Pending… after I hit save trying to associate it to openhabController.

@chris, any chance you could have a look at getting the scene channel working.
Could be quite useful: 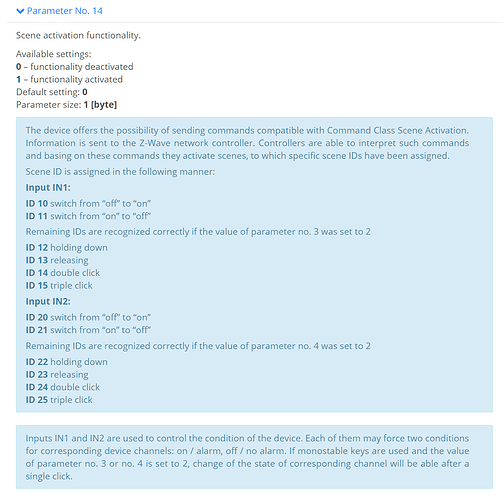 thanks… perfect. i am using your shared workaround with the Associations in Habmin. Without that, my Fibaro sender does not provide the alarms.
it would be great if that can get fixed. … i am happy to help with testing/logs when needed.

how weird - I set the associations in the same way, but never get anything from my items.

and when openHAB starts I see entries in the event log:

but no event ever fires when the inputs are triggered. I know they’re working, because I can capture the results with an awk script monitoring the zwave.log file (extremely hacky, even by my low standards)

Using the latest experimental binding but a slightly old snapshot - #1149