Hi,
We work on new hardware for Raspberry Pi and I looking for new opportunities of use. I really like this software openHab.
So, for now we are done with first two boards, first one is board for control stepper motors. It can handle:

Second one is binary IO board. It could by more interesting for home automation. It can handle: 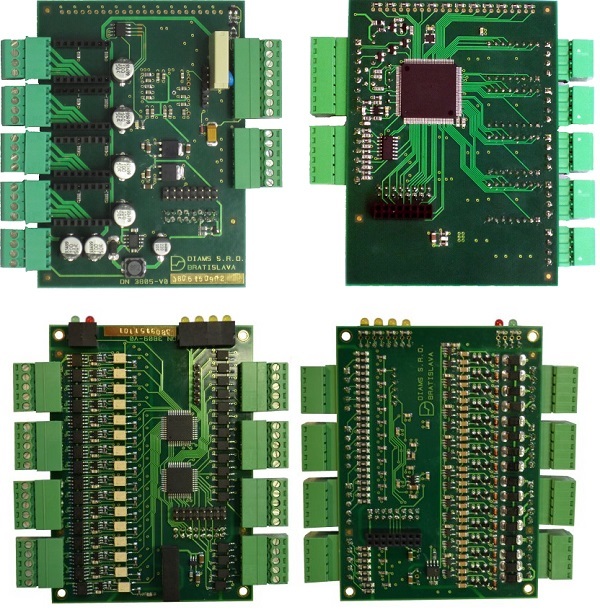 I would to ask, would it be intersting for openHub users hardware like this? Or any similar?
Thanks for reply or any idea in advance
Regards, Viktor

I would to ask, would it be intersting for openHub users hardware like this? Or any similar?Thanks for reply or any idea in advance

From my perspective it will depend on cost. Most of the time when I need to deal with sensors or actuators they are remotely deployed, often need to be battery powered (so very efficient), and as cheap as possible because I need a lot of them, and they usually only have to control or read from two or three sensors/actuators. This points to something like an Arduino or esp board.

Given this, I’m not sure this would be the right solution for me. However, if I ever have a lot of things centrally located I wanted to control (e.g. sprinkler system, christmas lights, etc) I could see this is being very useful.

Agree, depends on cost. I use PoKeys 57E boards, they give you 55 I/O pins with lots of functions for less then $100.

Thanks for replies,
I thought that home automation need to switch lights, blinds, HVAC, etc… any relay and it would be centralized somewhere in house. Isn’t it?

I would be interested in the second board, depending on cost. I have one group of potential sensors/actuators which are 24 v. Currently addressing using PiFace relay boards, but those only have a max of 8 relays for each PiFaceRelay and Relay+ daughter combination. I actually need to watch/control 20+ lines, so the cost of the PiFace starts to add up, as does the physical size.

Do you need also 20 inputs? Is it possible with any piface board?
Sorry, but we aren’t start production, I don’t have final prices at this moment.

Thanks for replies,I thought that home automation need to switch lights, blinds, HVAC, etc… any relay and it would be centralized somewhere in house. Isn’t it?

Yes to everything except the centralized part which is why this board isn’t as attractive to me (others have much more involved setups where it makes more sense). It can be many many meters with many walls between the central server and a switch that needs to be controlled via a relay. The options are to run a wire (ugh) or deploy something you can communicate with wirelessly. Running wires is often far more work, much more expensive, and often impossible (e.g. renters) so the more frequently used solution is wireless.

For example, the relays that control my garage door openers (and door opening sensors) are direct wired to a first generation Raspberry Pi in the garage which is about 80-100 feet from my openHAB server with a floor and three walls between the two. Running wires all this way would have been impossible without putting many many holes in the wall and wire is not cheap. For less cost and effort I was able to plug a wifi dongle into the RasPi, write some scripts and have it communicate wirelessly.

One rarely has more than a few devices at any one location which is easily handled by some cobbled together soldered board computers or micro controllers and relays and sensors. So being able to control lots of relays from one location is not a common problem in home automation. In fact, I could have use an Arduino instead of a Raspberry Pi for my garage, but at the time I had a RasPi on hand and didn’t have an Arduino.

But again, there are cases where it is useful such as controlling sprinkler systems like OpenSprinkler does or controlling a Christmas Lights display and the like. It looks like @bob_dickenson also has a deployment where a board like this can help. Depending on the cost, I might be interested in a board like this as well as I need to replace my sprinkling system’s controller and I have nine zones which puts me needing to get extra boards if I looked at OpenSprinkler and similar solutions. So this board could conceivably be a cheaper solution, assuming it is compatible with the valves. I haven’t done much research into that part yet.

No, not at all.
Just very few people have centralized wiring in place or have a chance to establish it afterwards. Remember, we’re talking control wires, not power lines. And even those who do will find out that they don’t have wires everywhere they need them (for e.g. optimum placement of motion detectors or temperature sensors).
Also, people want to minimize installation cost. Those come into existence when you need to run new wires and to redecorate the floor and walls afterwards. Most people don’t do that themselves (at least I can’t really stand viewing walls all day that I decorated myself :-)), and to pay someone to do it for you is expensive, quickly surpassing the cost of your hardware.
That’s why most end up with a decentralized, radio based set of sensors/actuators, each to just control maybe one or two lights only.

I am totally fresh with home automation(first reply on forum), but I bought a raspberry pi and some arduino parts last night, with the intent to start making a smart home for myself. The project that have got me into this is my hydronic heating system. this system is monitored by thermostats witch in turn controls actuators turning on and off the flow of water. I need to manage 20 of theese:Actuator, and to me, the second board looks like the right thing.

I have been looking for a 0-24V “thing”, i dont know if this board will do it, but as an electronics expert I,m sure you will find out i a blink

If this board can control the actuators i believe some people would want to swap their room thermostats with thermometers and code thermostat rules in OpenHAB, if the prize can justify it.

How is driven these actuators? Is it something like 1 wire up and 1 down, or PWM? This board can handle up to 2.5A

I never work with openhab, would be possible to help me someone with writing a driver? This board communicating with raspi over SPI port.

Well, a Pi or Arduino output pin won’t deliver 24V, so you need a 24V power source and some sort of relay, one for each of your actuators.
I have deployed similar ones (they just happen to be 230VAC, so I don’t need any extra 24V transformator), and they have just two wires (they start opening if you put on current).
I use mains-powered (230V) zwave relays for that purpose. Some of them, such as the Fibaro FGS-222, allow for attaching an external power supply, that way you can get your 24V to the actuators.

Another option would be to use a bank of relays such as this one, and connect the Pi output pins there. Use the openHAB GPIO binding to control them.

And remember, you usually don’t need to control all heating tubes independent of each other, you need at most one per room, probably even less.

Havent bought my actuators yet, so I can still go for 230V. I’ll make sure it’s a two wire type in either case.

The Fibaro solytion is expensive but the bank of relays you link to is next to free! I believe I’ll go for the relays. It will not be plug’n play though…