Hi @Schnuecks
Thank you!
In the meanwhile I am updating the json, css and js files to make the customization process easier.

These modifications open to a lot more customization, doable only via css. It is also easier to test because you just need to reload the page instead of having to reload the daemon and restart frontail all the time.

As soon as I finish I will update this post with all the details!
The dark theme is finished, I am updating the light theme.

Hi, this sounds great.
This looks aloot easier yes, but on docker side container restart would still needed if the changes are made in the compose file but now only the css part would need to change.

It may be possible or not, but would it possible to switch the theme with a button, like pause/unpause ?
Currently i have a little problem on my ipad that i couldn’t use the pause/unpause button because the button is under the filter field. So if we could move this button for pause/unpause somewhere else and add a button for the theme too. I think that would be an idea.

Just updated the first post with the new stuff:

It may be possible or not, but would it possible to switch the theme with a button, like pause/unpause ?

I guess it is possible via js, but my knowledge in JS is very, very limited.
Since the 2 css files now share most of the rules (basically the only differences are the colors used), instead of switching css file it could be easier to add/remove an ID to the body, and merge both css files in one. E.g.

<body> → the rules for the light theme are used.
<body id="darkTheme"> → all the rules that start with #darkTheme are used - to override just the colors.

Currently i have a little problem on my ipad that i couldn’t use the pause/unpause button because the button is under the filter field. So if we could move this button for pause/unpause somewhere else and add a button for the theme too. I think that would be an idea.

Unfortunately I don’t have an iPad to test, and i couldn’t reproduce the problem neither with Safari Inspector, nor with Chrome dev tools, nor on my 7" and 9" android tablets.

I tried to mess around with the media queries to make the pause button label shorter on smaller devices. I also reduced the font size of the title of the page to free some space.

Can you test if this solves your problem?

@AEM are you able to tell me if the files in the first post are the latest? I see you have improve things along the thread and want to be sure to get the latest

@Andrew_Pawelski Yes, this is the latest version. But please be careful with the app.js and replace only the appropriate parts in the original, no copy / paste of the whole file.

@AEM Thanks for the modification now I can at least reach and press the pause button, the text doesn’t quite fit yet but I can live with that.

@Andrew_Pawelski I confirm the first post is the most updated. Sorry if it was misleading.

the whole thing is pretty finished on my side. There are 2 things still TBD:

In case of future updates I will always keep the first post updated, and I will write down in the thread what I updated. I think it is easier for those that don’t want to read the whole thing.

Thanks a lot @AEM and @Schnuecks for this awesome work!
I am trying to get the new styles up and running with my frontail install (manual install, not openhabian) via systemd whereas systemd is unable to start once I changed the files (it works with base frontail install).

Hi, could you restart the service and then please post output from this command sudo journalctl -p err -n 20

Hey @chrismast just to be sure, I noticed you wrote “style jsons” - maybe it’s just a typo but better double check: the files involved in this step are .css files, not .json files.

So, according to your description, you should have copied over the following files:

Also, in step 5 there may be a /local missing in the json path.

Hi, What was your solution? Same issue come for me

Thanks guys! I got it working (the missing local was the error) with a normal frontail install, whereas it seems several design components/formats are missing.

Tried then to copy the full git from Schnuecks pointing whereas I am ending again in a frontail boot loop.
Output as per sudo journalctl -p err -n 20 does not help too much:

Is the git based on openhabian? If so, are there know differences in files etc. vs a normal direct frontail install?

EDIT: Update: I got it now working, using my first method copying all files manually. It seems that a chmod +x was needed on the custom_ALB.json file. Will run it a bit on my test openhab system before moving it into production to see if all is good. Thanks guys!

EDIT2: Now talking about formatting: Somehow the WARN level (which I assume should be then highlighted in orange as per screenshot?) does not trigger.
My log entry:
Log.logWarn("Rule ", “WARN TESTing the Time” + " " + now + " " + current_time);
Output:

The -288 pt text-indent rule is defined inside openhab_dark.css (this is the standard dark theme of openHAB). This css is imported as a “base” in my css (see first line of custom_ALB_dark.css).

Actually this rule should be overwritten by another more specific rule inside the same css file, as visible in the screenshot in post #7.
I don’t know why they inserted this weird -288pt text indent rule in openhab_dark.css, just to override it a few lines later. Maybe they were trying to achieve some layout result dealing only with css and not touching the js / json as I did - which led to using negative margins, text-indents, etc, which works and is probably more future-proof, but it is also a dangerous hack that can sometimes lead to unexpected behaviours.

Basically, according to openHAB’s css, if your html has a tag:

should be overwritten by the “stronger” rule:

Somehow this does not always happen, maybe your pre does not have the no-indent class so only the first more generic rule with the -288 indent will apply and it will skip the second rule.

Long story short, in the next update I will add a rule in my css to override .log .inner-line, no matter if it has the .no-indent class or not - so this glitch should happen no more.

In the meanwhile as I guess you already discovered, you just need to add this rule in my css:

(The !important is not strictly needed but better be sure, it is a bold statement

For the git part I let @Schnuecks answer, I am not so familiar with Github. In my understanding he forked directly Frontail, so maybe some references to file locations don’t match, but again, I am not sure so I may be wrong. I personally edited the files by hand, less elegant, less practical and old school.

About the formatting you are correct, the WARN level should be in orange.
For your reference, the logs that have the whole line highlighed in Frontail / OH are the ones that contain these words:

I just restyled them, here is a quick test: 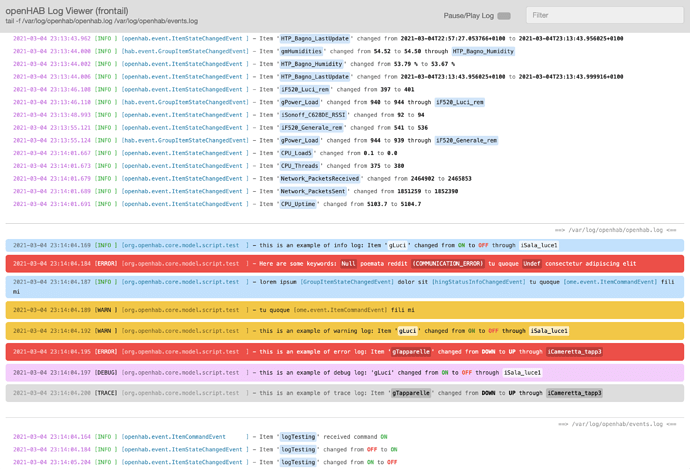 As you can notice, also the top line of your screenshot ("==> /var/log/ … <==") is not styled correctly, the text for example should be aligned to the right.

What browser/device/OS are you experiencing this issue on? Did you try to check on another device?
Can you copy-paste the html of that portion of page so I can check what is the html the json is dealing with?

Thanks for your reply.
I saw those entries in the json file and also tried to create my own by copying the WARN one and renaming it into RULES (as I wanted to highlight all RULES log entries).
Below screenshot of log and html, hope that is what you are looking for (?).

Tried it with Chrome, Edge and on my Android, all with same result.

EDIT: Switched to the black version, with same result.

Thank you, it seems the problem is in the app.js because it should output classes, not styles.

For example in the highlighted line in the html you should have:

Instead it is outputting

“style=…” is what app.js is doing by default (and after you modify that file it will ouput “class=…”)

Is the git based on openhabian? If so, are there know differences in files etc. vs a normal direct frontail install?

Hi, @chrismast my frontail is a fork of the original version from GitHub - mthenw/frontail: 📝 streaming logs to the browser, the only modifactions are the files of this thread.
Path depend on how nodejs is installed via package manager it should be /usr/lib/node_modules or /usr/local/lib/node_modules if you’ve compiled and installed from source. the nodejs image is build from source so the path ist /usr/local/lib.

I’ve managed to mess up my frontail installation trying to get this going.

when I run this command attempting to test:

I get these errors:

I’m not sure cookie is getting installed to the right node area? I’m not well versed in node…

any thoughts on how to fix or reset/reinstall?

I had the same issue by only cloning the git.
When I installed frontail via the “normal” route, in my case npm, and overwrite respective files only it worked.

I triple checked the app.js file now and it aligns to your code above, for reference attached my app.js (renamed to txt).
app.txt (8.3 KB)

EDIT: Looking at the other posts here, it seems that the same missing format is happening here as well.