Getting a Hue Dimmer Switch to work with the Hue Binding

So today I updated my main installation of OH to OH3 through openhabian. Current version from the console: 4.2.7, hud binding version 3.0.0

The hue binding for some reason lost all the bulbs. But this isn’t an issue, since auto discover works pretty well. So I quickly added all the bulbs and noted, that it also seems to have detected my dimmer switch. I never used this one through open hab in my previous set up, but I figured, why not - and added it. But it came back as a "CLIP Generic Status Sensor (Thing type: 840). The docu however says:

The Hue Dimmer Switch has 4 buttons and registers as a Non-Colour Controller switch,

Which is thing type: 820. I tried some stuff an realized … what was Auto-discovered was not my dimmer switch, but some internal state object. 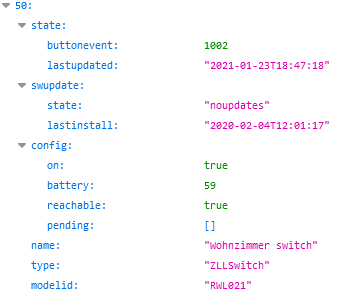 As you can see, it’s internal ID is 50 and it has those “number events” for the buttons.

So I manually added a thing with the hue binding:

I created the items, linked the channels … and - nothing.

The items stay at “NULL” no matter what I do with the dimmer switch. Also no errors show up in openhab.log

Just to be precise, I’m talking about the switch that visually looks like this: 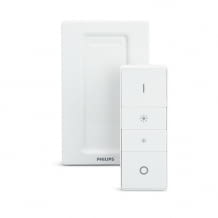 I was doing something else for some time now and noticed that the items of the dimmer switch now have values! According to the timestamp of the last update however, from over 90 minutes ago!

So I switched the lights on and off for a bit with the switch again, and then dimmed them down … but again, nothing is happening.

So it seems it IS working, but just … very very delayed?

I have loads of those switches which are linked via the Hue Hub to the Hue lights in the house. I have recently installed OH3 (Openhabian) and the Hue binding too and haven’t got it to work properly. The lights and the switches still work fine manually or via the Hue app though.

I haven’t troubleshooted this at all though because I haven’t even got the bulbs to work with OH3. See my recent post - the bulbs/lamps are discovered as Things but they only show one Channel which is an Alert string for a temporary change to the bulb’s state (an even that is hidden under Advanced). All the other Channels that the binding instructions lists are not there.

@Daniel_O How did you get your bulbs to show Channels so they could be added as Items/Points? Here is the discovered code for a typical bulb Thing as discovered which looks OK to me but the Channels in the Binding instructions don’t show up.

@kingswindsor: I have no hue white lamps, for comparison, here is a hue color bulb.

The 0100 type from you seems wrong, even when it’s a hue white? But still, you should at least have a dimmer channel.

Per the docu I would assume the hue whites would be type 0220.

Maybe you can try adding them manually.