Sorry if I write again about this topic…after some days that I’m trying to do a very I thing simple task I’m very frustated…
according to the post
post and @rlkoshak and @JustinG and @Wolfgang_S I’m not an expert user so I want to don’t use the file configuration but only the UI. The UI have less documentation but doesn’t metter is self documenting … @rlkoshak I want to control a dimmable light…very simple and this light can also change the color temperature…

then I try to swithc form the configuration file like this:

sorry if I ask something of very stupid but after some days and many hours to try to configure something someone can explain me what I’m doing of wrong? Really I want to swith from Home Assistant to Open Hub but for my until now is like a mountain!

Thank you for your patience. 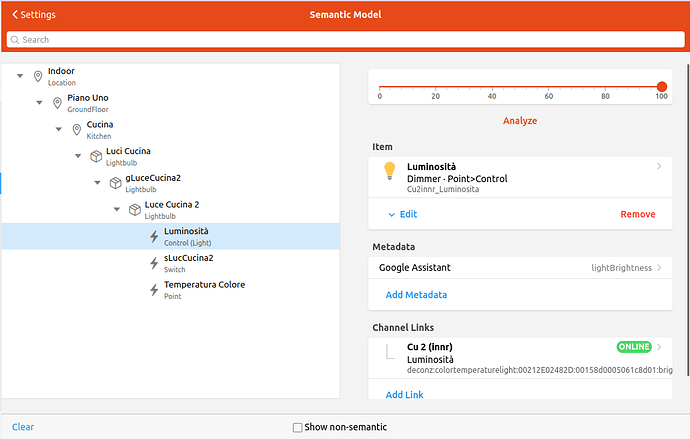 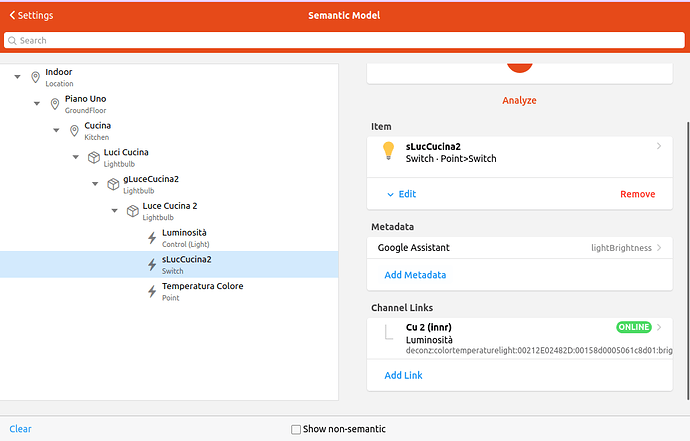 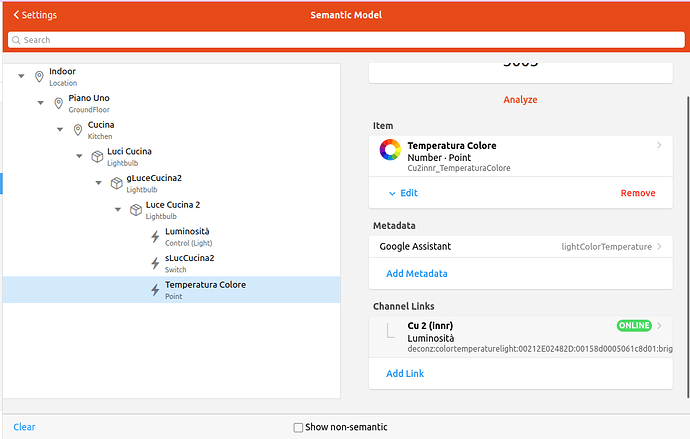 You’ve not shown us the most important part. What’s the Google Assistant metadata set to for all the Items? In particular, according to the docs the parent Group Luce Cucina 2 needs to have metadata added too, in this case it should just be Light.

The word “SpecialColorLight” doesn’t exist in the docs anywhere so that’s not a valid Google Assistant metadata.

Furthermore, the docs also say that the Switch Item needs to be lightPower

Sorry @rlkoshak but is not this the part with the Google Assistant Metadata?

In the code and in the UI I try ScecialColorLight because is written somewere in the forum and works.

Anyway can you please explain me better how I have to configure the lights in the UI with the correct metadata? Or can please show me where is explained in some others topics or documentation?
Really I’m trying to do my best but I’m not able to solve myself the problem

I don’t have a light like this exposed to google assistant. So all I have to go on are the docs (linked to above).

but is not this the part with the Google Assistant Metadata?

Yes indeed. But you didn’t show that in your reply above. You showed it for the three Point Items but not the Equipment Group. If you don’t show it, we can only assume you didn’t do it.

Speaking of which, did you fix the sLucCucina2 Item? As I said above, the docs say it should be lightPower.

And to verify, after changing the metadata, you are asking Google Assistant to sync devices, right? GA won’t pick up changes on its own. You have to tell it to. 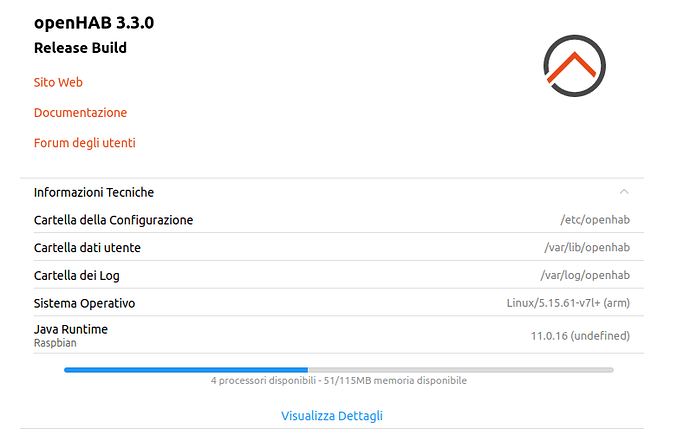 then lightPower as metadata as you and documentation suggest

and then lightcolortemperature as attributes in the lightcolor channel

but still if I ask to google to integrate openhab say mee that there is no devices…If I create the equipment like the code:

immediatly google assistant found the device Luce Cucina 2. But still as you suggest I don’t want to use the code because I’m not expert and I have to concentrate in the automation but not in the syntaxt. But how via UI don’t work? What I’m doing wrong please?

I don’t see how the text file could be working unless you are on a 3.4 milestone release or snapshot. At least according to the docs “SpecialColorLight” didn’t exist until after 3.3 release (or the docs didn’t get updated for some reason).

I am on a 3.4 milestone though and I’m seeing that “SpecialColorLight” isn’t among the options to choose from. That’s a bug.

To verify that this is the problem, do the following.

Go to the metadata for the Group, click on the “Code” tab, and manually enter “SpecialColorLight” in place of “Light”. It should look something like

If that makes it work, we need to file an issue on the webuis repo.

we are near the solution I thins

some other tips? I don’t understand the parts about the bugs…

but with the code:

But anyway now I have to configure all my lights in deconz, also all the open\close sensors et etc and then I have to switch to MQTT with shelly devices and other stuff but really thanks a lot for your help @rlkoshak . But an honest consideration…do you think that all the process for home automation is simple for a novice user if he just look the documentation? Again I’m switching from home assistant and I’m finding all very difficult…

I don’t understand the parts about the bugs…

When you add the metadata for the Group Item, it should offer “SpecialColorLight” as an option. It does not. It only offers “Light”. That’s a bug and needs to be fixed.

It’s a dimmer Item. It only supports integer values between 0 and 100. You cannot set a Dimmer Item to anything else. There is presumably an automatic conversion between those values and values between 2600 to 6999.

You are doing integration with Google Assistant. That’s a wholly separate thing. It uses Items. But it’s not setting up Items.

And if you find using text configs easier, go do that. Everyone is different. Maybe you get other benefits that is worth fighting the syntax and finding the right documentation.

But an honest consideration…do you think that all the process for home automation is simple for a novice user if he just look the documentation?

No, that’s why I recommend using MainUI for most things. Unfortunately you ran into a bug and, to be frank, you are trying run before you can walk. You are trying to do too much all at once and that makes it more difficult and complex.

Also, that’s why I and others spend so much time here on the forum helping people get started and figuring out problems. We know this is complex and hard.

I have to switch to MQTT with shelly devices

There is a Shelly binding. Does it not support your devices? It’s local control (not cloud API) and easier to set up and use than MQTT.

Sorry @rlkoshak , the problems are not finish

I’m trying to configure a dimmable light (no color temperature, only on off and brightness).
I really try different configuration but I don’t know if I’m doing wrong or also here there is some bug…
I try to explain you:

The situation is LUCE STUDIO (the equipment).

I have to switch to MQTT with shelly devices

There is a Shelly binding. Does it not support your devices? It’s local control (not cloud API) and easier to set up and use than MQTT.

Don’t forget everything we learned above. If you are going to use a Group, you have to use “SpecialColorLight” for the Group’s GA metadata (which you have to do through the Code tab)

Because you can either expose the Dimmer Item all by itself to GA, or you can expose a Group that represents several controls for a light to GA.

If you expose a single Item you will use “Light” for the ga metadata. And that Item is the only thing that Google will see. It doesn’t see the parent Equipment Group. So of course it’s going to show up in Google Home as Luminosita. That’s all it knows for that Item.

If you expose your Items with a Group, as we discovered above, you have to use “SpecialColorLight” for the Group and lightBrightness on the Dimmer Item.

Sorry but probably I explain the concect wrongly… I try to explain better:
The first tentative is to use for the group SpecialColorLight and lightBrightness for the point.

because the light is only dimmable, GA don’t see the light.
If I use this code:

that works for the lightcolortemperature light again GA don’t see the device. Then looks like that with the dimmable light the situation is different…and then I really have no idea how to manage the light as a group. Is more clear @rlkoshak now the issue?

Ultimately, if it’s just the one Item that is controllable, why don’t you just apply a meaningful label to the Dimmer Item and use “light” as the ga metadata?

SpecialColorLight is really only expected to be used when you have more than one control on a single light. Why make things more complicated than it needs to be?

Note, it’s probably a problem to tell it you are using a colorUnit and colorTemperature but not have a lightColorTemperature tagged Item as a member of the Group.