I had a look at my task manager, and saw:

Are others seeing this?

Are there things we can do to tune this?

No it’s not expected.
I tried the 2.0.0 release with the demo setup, Chrome’s internal task manager (Menu > More tools > Task manager) doesn’t report any issue with the HABPanel tab even though the tab is in the foreground, and receiving item updates. This is while idle of course, clicking around and switching between dashboards causes some CPU usage but nothing out of the ordinary… 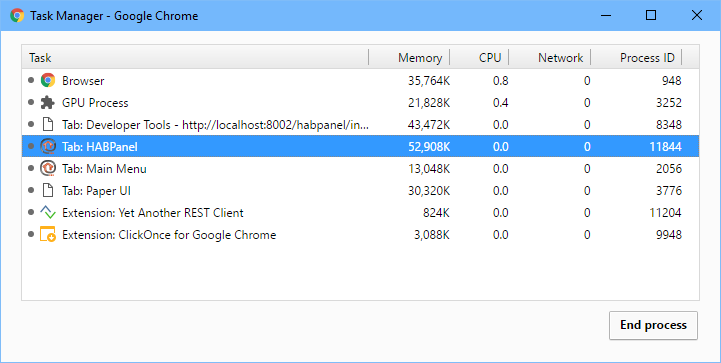 Maybe check with F12; you could have some issue with your configuration.

Seeing this regularly… what do you want me to look for in the debug/console windows. More of a back end guy, but if you give me guidance, can help figure out what it is. I have decent java script and “F12” experience, but nothing too deep.

That nailed it! The usage went from 25-30% down to 1-3% just by eliminating the 2 controls that I was using for Current and Forecast weather using the climacons from org.openhab.ui.iconset.climacons-2.0.0-SNAPSHOT.jar

You can have a look here:

In the described zip file there are different styles for the weather icons.

Did some quick work to cut and paste, and haven’t seen habpanel go above 7% since!