Hi everyone, I’m new to openhab but have set up a server running openhabian to control two Sonoff Pow R2 switches I flashed with Sonoff-Tasmota. I’m impressed so far, and now I’d like to integrate some more bits and pieces around the house.

The aim is to monitor devices that use a lot of energy or money.

I don’t want to use any devices that send data to a third party server.

The two smart switches/power monitors I currently have are connected to:

I might add more smart switches for the washing machine, dish washer and tumble dryer.

Areas where I could do with some advice are:

Oil level monitoring
We can’t get mains gas in our house so we have an oil boiler, and a 1500L oil tank outside.
The oil level is monitored with a Watchman Sonic oil level monitor, which displays the oil level on a remote that is connected wirelessly (not wifi, I’m not sure what frequency).

Does anyone know if it’s possible to display data from the Watchman in openhab (is there a receiver for the right frequency I could connect to the server)?

Boiler programmer
Our boiler is a grant oil boiler. The programmer is a Honeywell ST9400A.

Is there a modification I could make to it to integrate the existing programmer with openhab? If that’s not possible, are there cheap programmers I could swap it for that would do the same job?

At the moment, the boiler is off - I don’t want to heat a whole tank of water at the start of the day if the solar panels would have done the job later for free. I’m monitoring the power consumption of the immersion heater, and it looks like the solar panels are doing the job on their own at the moment (little to no energy used by the immersion heater).

I’d like to monitor the temperature in the tank directly, to get a feel for how much effect the solar panels are having. That information will help me decide when to turn the boiler back on.

Smart Meter
I’m monitoring the energy usage of individual appliances, but the overall meter is an analogue one. I’d like to know the overall usage for completeness.

I came across this Peacefair energy monitor linked in a previous thread. Has anyone used something similar? I’m hoping I’d be able to use it similarly to the Sonoff Pow R2 but clip it around the incoming live wire.

Any advice would be greatly appreciated!

Oil level monitoring
We can’t get mains gas in our house so we have an oil boiler, and a 1500L oil tank outside.
The oil level is monitored with a Watchman Sonic oil level monitor, which displays the oil level on a remote that is connected wirelessly (not wifi, I’m not sure what frequency).

The sensor broadcasts on 433MHz and has been hacked. See: https://github.com/merbanan/rtl_433

Boiler programmer
Our boiler is a grant oil boiler. The programmer is a Honeywell ST9400A.

Is there a modification I could make to it to integrate the existing programmer with openhab? If that’s not possible, are there cheap programmers I could swap it for that would do the same job?

It’s not wireless so not really.
You could look into a Zwave model

Cool, thanks! I’ll get myself a DVB adaptor for the oil tank. Have you used it yourself?

Hi, I can’t help with your monitor enquiry as I’m a total noob here, sorry, but can I ask you how you find the Sonoff with controlling your immersion heater? I’d like to do something like this, but a total beginner… I can’t find much online evidence of people having installed the switch to heat their water (in UK or Ireland), and the switch reviews on Amazon are a mix of good and bad… thanks!

I typed you a post with lots of nice images, but the forum software told me after I uploaded them and wrote it all out that I’m only allowed one image per post… so I’ll have to add the others later. Sorry if it makes the post look a bit messy

I really like the Sonoff switches, I think they are good value for money and it’s handy that the company has made it easy to “hack” them and replace the firmware.

I’ve mostly just been monitoring the power consumption of of the immersion heater using the Sonoff rather than controlling it so far. We have hot water solar panels on the roof and I turned our boiler off completely a couple of months ago so I wasn’t sure if the water was hot because we were heating it with the immersion heater, or if it was the panels working!

The graph above was produced using Grafana and plots the daily cumulative energy usage of the immersion heater. As you can see, it’s mostly off, and when it comes on it’s only using a very small amount of electricity (1.5kWh, so about 20p). I’ll keep monitoring this to decide when to turn the boiler back on.

Here’s the Sonoff in my airing cupboard (on the left). The stuff on the right is the controller for the hot water solar pump. I just cut the immersion heater cable and installed the sonoff in the middle, and added some push connectors to make it easy to remove the sonoff if I want to use it elsewhere in the future.

The most difficult part of using the sonoff was replacing the firmware with sonoff-tasmota. The instructions on that page are pretty good, but here are some bonus images…

View from above with jumper leads connecting to raspberry pi out of shot to left:

Raspbery pi set up for flashing:

I had some trouble flashing at first but it turned out to be dodgy soldering technique.

If you do end up using the Sonoff, do yourself a favour and get some flexible cable! The stuff I had was very stiff, and because the wires cross over it made it quite difficult to bend the wires at the right angle to connect the sonoff.

The timer function on the web control panel for the sonoff appears quite straightforward:

Obviously all of the software stuff is for sonoff-tasmota, I have no idea how good the stock firmware is - I replaced it straight away.

Let me know if you want any more info

Here’s the Sonoff in my airing cupboard: 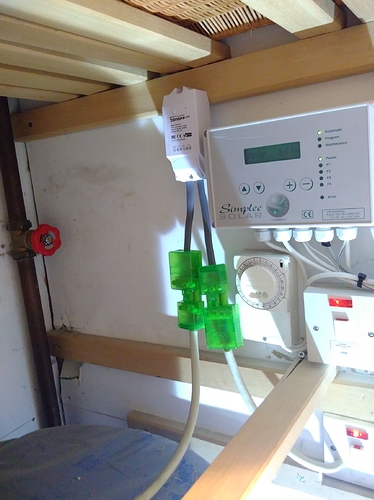 View from above with jumper leads connecting to raspberry pi out of shot to left: 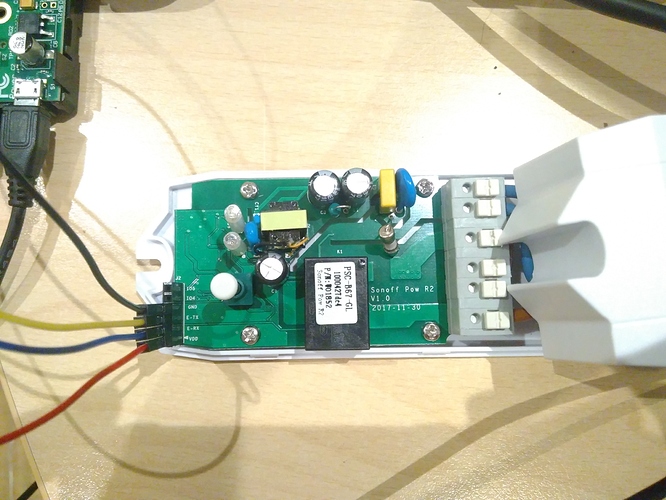 Raspbery pi set up for flashing:

The timer function on the web control panel for the sonoff appears quite straightforward: 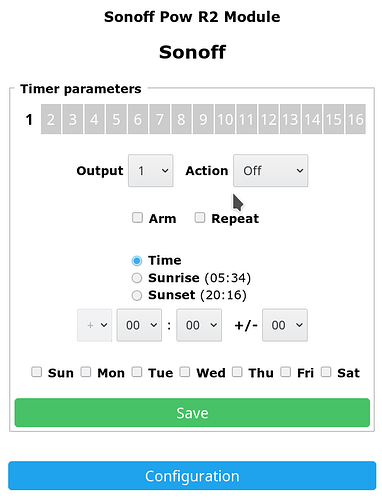 This is brilliant, Sam, thanks so much. Makes me feel much braver about trying it myself.

You’re welcome… do ask if you have any questions - I’m pretty good on the software side of things but I’m not very experienced with the electronics & hardware part, so I’ve probably just gone through the same process you’re about to start.

Are you going to use a raspberry pi to flash the new firmware? My pi were all quite old so I had to tweak the instructions on that wiki slightly to get the GPIO ready (as the instructions mention the older raspi have /dev/ttyAMA0 instead of /dev/ttyS0).

Really? I considered that when I installed it and didn’t think it would be a problem.

That’s fine then. The normal sonoff are rated 10A if I remember right. I just wanted to highlight the potential issue.

Great, thanks. I did wonder initially because a lot of their stuff is for lighting, which is obviously not meant for such high power appliances.

I was going to comment on the same. Personally I would drive a better relay with the sonoff. It’s a (great) cheap Chinese product. That relay will always switch a near-capacity load. It’ll weld closed sooner than you think.

Alternatively, if relay == off&& currentdraw gtr than zero throw big_error()

In case you want to err on the safe side, I found this:

You can drive the realy with the 3.3V internal from the sonoff and switch your immersion heater. And sleep at night…

Can you measure power consumption if you use a relay?

Can you explain what you mean about it “welding shut”?

Yes, the measurements will still be the same. What you do is have your sonoff energise the main contactor (aka relay) and it does the hard work.

Welding shut often happens when relays switch heavy loads and are not designed for it. When the contacts open or close there is a spark. Sometimes big. This eventually causes the contacts to stick closed. Best case, it’s enough to carry the load and your heater is always on. Worst case, it’s not enough and overheats. Possibility then endless