Hi there,
I am using several Heatit Z-Push 8 buttons in my setup. I have configured them all with just 2 channels, on the scene number and the battery level. In respective rules, the system reacts to changes on the scene number. All good with that.

Now I realized (not sure if that was there before or not) that I can only create channels for each of the button pairs. I played around a bit with that, but get no changes on these when buttons are pressed.

Anybody with some experience on that? 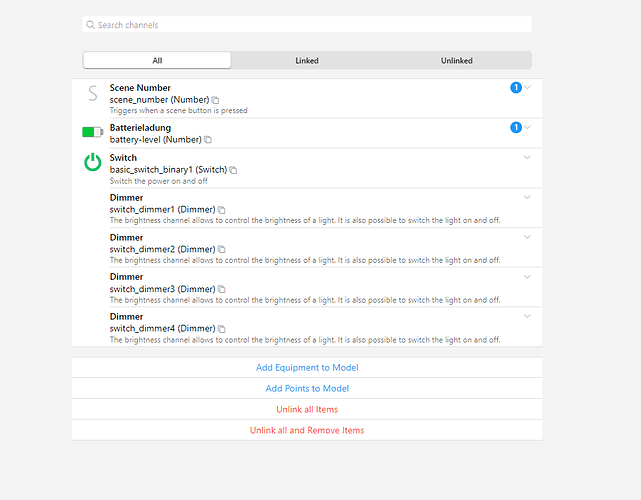 From what I saw in the manual there are 4 groups, each containing two buttons. Scenes are sent per group, independent of which button in the group you did press.
So I’d say “works as designed”.

maybe, my question was not clear enough. The channels I have created for the Scene Number and Batterlieladung are working fine. But when I create channels for the Switch and the four Dimmers, nothing is happening.

OK, now I got it.
Just checked with this device (I have one that was waiting for integration) and I see the same behaviour:
If you press the buttons OH receives a scene number x.0 (x = 1…8)
Pushing the button for a longer time it goes to x.2 and on release to x.1.

The dimmer channels / items are not triggered at all.

I tried to set an association to another device, but this did not resolve this point.
As I only require the scene IDs for switching things I’m fine but just out of curiosity I wonder why this is not working.