Good afternoon all. I am hoping that someone out there can help me as, although I have worked in IT all my life, Linux and its variants are still new to me and are definitely not my area of expertise, although i do have a number of Raspberry Pis running various applications and home made electronics projects - but have an issue now with my OpenHab installation.

Last night I connected to the Pi via SSH and ran

I noticed that it displayed some error message so did a shutdown and then restarted the Pi, the output of SSH was: [Output added as a text file as the post was too long and would not submit if included in the main body of the post]:

After restarting It was apparent that the Pi was not appearing on the network, so I attached a screen and the following was displayed: 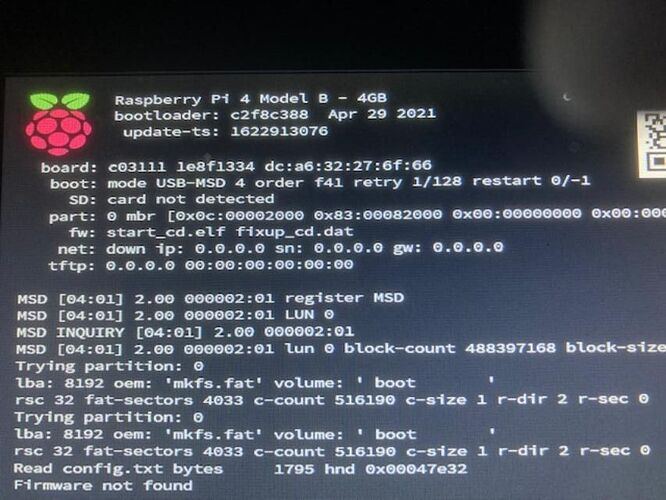 Note: I do not have an SD card in the Pi, but have a USB connected SSD (250Gb capacity).

Would be very greatful if anyone out there with more knowledgethan me (not hard!) would be able to assist and advise how I can get the disk to boot again and not lose my OpenHab setup and configuration (It’s taken me quite some time to get it all set up and working correctly!).

Supporting individualized Linux installations is really out of scope of this forum.
I suggest you either go for some Raspi or Linux forum or reinstall your system based on openHABian.

or reinstall your system based on openHABian.

according to the attached logs it is an openhabian installation.

according to the attached logs it is an openhabian installation.

According to the post it’s SSD based which is neither recommended nor supported in openHABian.
A main reason for that is issues like the one shown here. The openHABian docs also ask you not to ask for help here in these cases.

I would get a linux rescue ‘disk’ ( e.g. live usb stick ) and first check if the partitions are still detected and if they are readable.
With that it would be possible to get files backupped if they are still readable.

Check the name of your network interface. During an upgrade mine was renamed or disabled. Fix was to list network interfaces, then update files with proper names. I’m no Pi expert or linux expert, but do some searching for configuring network interfaces. It looks like your interface is down, which you can bring back up but it may not stay up next reboot if it isn’t configured properly.

Thanks for the link, however it is still very confusing:

Blockquote
Plugging in HATs like an UPS or USB sticks or even SSDs for storage is fine, but we do not support attaching any hardware if that requires any sort of software or configuration changes on the OS part of openHABian. To put it straight: we don’t recommend SSDs and do not support attaching an SSD and move the system over there. If you know Linux well enough to manually apply all the required modifications, feel free to do so but please be aware that this is a completely untested option that may work or not and what’s even more important: it is unsupported. Don’t ask for help if you run into trouble.

which appears to be a little opposite to me. However I did make a mistake and it’s a HDD not a SSD attached (sorry forgot that I had changed it over a while back - small 2.5" disk complete with USB interface all packaged in a rubber case).

BUT it did not require any ‘software or configuration changes on the OS part of openHABian’ to get it going.

Image was downloaded from official site, image burned directly to disk using official imager, disk attached to Pi, Pi turned on, set up completed as per official documentation. Just used the HDD instead of an SD card, and i didn’t think that would matter as the Pi natively boots of USB.

However thanks for the link and it’s something I will keep in mind going forward.

Gives me something to look at. No spare devices at home at the moment and getting new Pis is impossible (have had some on order from 3 places since December last year!). Trying to see if I can get it hooked up, as suggested, to a friends to see if it will read the partitions.

i didn’t think that would matter as the Pi natively boots of USB.

It does. Device names and pathes differ. This is for any USB device, no matter if SSD, HDD, flash, whatever.
That openHABian is not built for. That’s what you now suffer from. That’s one major reason why it’s not supported.

Yep, I understand that now - Thanks.

Quick update - just incase there is anyone else out there that gets the same issue.

Believe that, as stated in the original post, the apt get update / apt get upgrade somehow failed and did not complete correctly.

Re-connected the disk, powered on the Pi … and all was back and working correctly.

Can now back-up the openhab config so that it can be re-installed.