I’m trying too get OpenHAB too update my Kodi library,

I have tried too follow a tutorial post for on how too do this but i’m getting errors and cant work out how too do it that way,

I have entered it into my browser it does update my kodi libary how do i get openhab too send the request ?

I do have the http binding installed

Or you can use the sendHttpGetRequest from a Rule. Since it is a GET instead of a PUT or a POST with a required body, this is pretty easy.

I would. They are definitely saying it won’t work after that point so I wouldn’t waist your time. I don’t use Kodi so I couldn’t tell which of their other approaches are reasonable. But I can say using curl is just making HTTP calls so that won’t be an option. 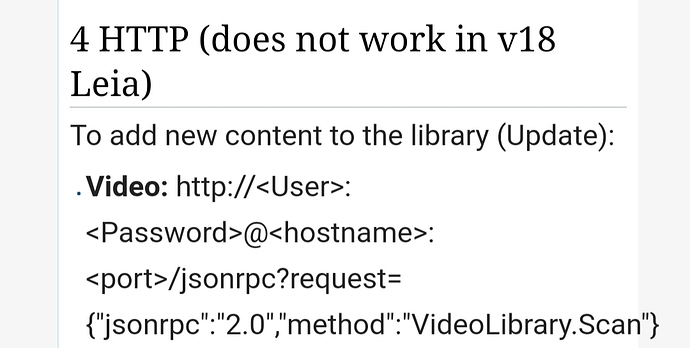 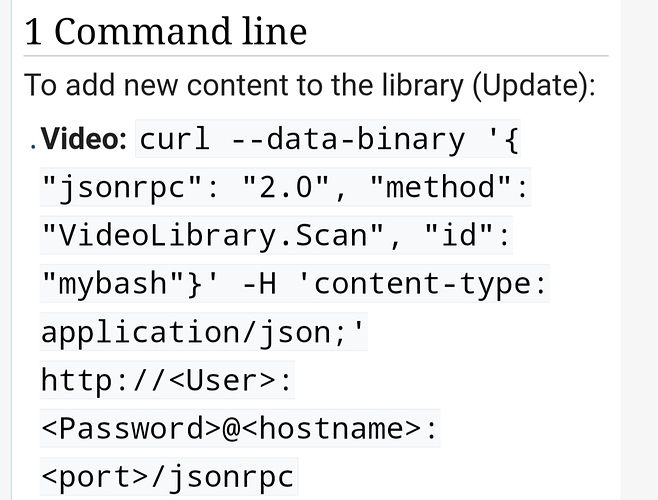 Maby standard HTTP is no longer supported because the user and password are before the host name of the kodi machine I read that this is pretty much a dead thing in the http world and maby the team have stopped this from working but using a command line curl is still possible?

but using a command line curl is still possible?

Nope. There is no difference (from Kodi’s perspective) between a browser or curl hitting that URL. It’s all an HTTP GET call and both have the user and password as part of the URL (it’s called Basic Auth).

How about using a python script?

How about using a python script?

I don’t know. I know nothing of Kodi’s API.

Thanks for the pointers

Please follow the last link in the HOW-TO: JSON-RPC API. Kodi supports two different interfaces. A HTTP API and the newer JSON-RPC API. First one will be deprecated in v18. Second one is a HTTP- and/or raw TCP socket-based interface. Meaning curl request are possible but with a different syntax than before. If you read carefully through the examples you can see the difference.

Using HTTP Basic Authentication is IMHO a bad idea. But using curl should be the way to go. Please try something like this:

Hi Thanks for the reply

I also agree with this and don’t like it myself as credentials are sent over an unencrypted connection and could easily be stolen, I’m also not much for the way kodi internally stores credentials in a plain text file called passwords it’s pretty studid

Thanks for the clarification on that

do i need too create a script and have openhab run that ?
or use the exec binding

thanks for any pointers

Create a shell script and call it via executeCommandLine from a rule. Don’t start with exec binding for that purpose.

Ok I will have a look into that

The tutorial linked in your first post of this topic should solve your issue.

I have tried too follow a tutorial post for on how too do this but i’m getting errors and cant work out how too do it that way,

This still works, you just need to get your linux permissions sorted.

Hi @job thanks for the reply

This still works, you just need to get your linux permissions sorted.

OK i will look into that too

I ran the commands you recomended it says this opperation is not permitted i stored the kodi script in /home/openhabian/kodi_rescan.sh not in the scripts folder

You need to be root to change the ownership of a file.

And once the ownership of the file has changed, you will need to be either the openhab user or root to change the file permissions.

As @rlkoshak already mentioned, use “sudo”. “sudo” is nothing more than executing another command with elevated permissions. It’s exactly the same as “Run as Administrator” in the windows environment.