Help with a 2-way switch

Hoping someone can help me. I’m trying to control a light which is 2-way (there’s a switch for it upstairs and another downstairs).

The switch that has permanent live going to it is the upstairs switch and this would be my preferred location to install the “switching” module.

I have 2 modules purchased from before that i was hoping to use here (either one, i’m not too fussy). They are the Aerotec Nano Dimmer (ZW111) and the Fibaro Single Switch 2 (FGS-213).

I should point out that the light switches in question all contain neutral wires and i’m based in Ireland (if that helps any).

Actually the proper electrical term is a 3-way switch. Perhaps searching on that term can give better direction.
I just installed a zwave product here for the US but that solution would not work in Ireland.

May be this helps:

(Note: I’m not affiliated with the shop)

I think this is what you need. It is for Sonoff mini but wiring will be same for others. 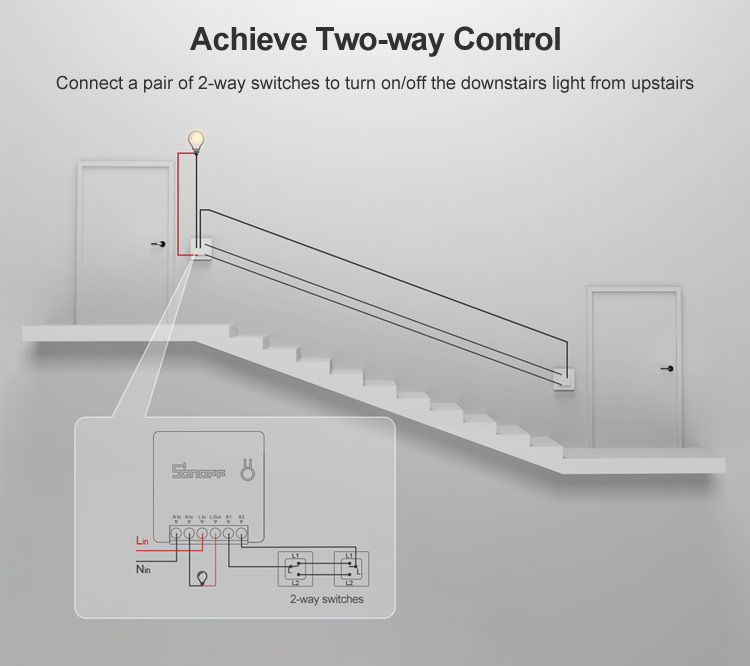 I have 2 modules purchased from before that i was hoping to use here (either one, i’m not too fussy). They are the Aerotec Nano Dimmer (ZW111) and the Fibaro Single Switch 2 (FGS-213).

There’s a number of ways but you have to do the “switch” in your head from electrically to software controlled switching. You probably want what is mentioned as “double wall switch” in FGS-213 manual.
So you have to re-purpose one of the wires going between your switches (strictly speaking proper electrical installation, this could also mean to exchange because it needs to change color…)…
Oh, and there’s the smart approach: put up a motion detector, too. No need to touch switches any more then.

Apparently different terms used in different regions of the world. I spoke from a North American perspective after having studied mains electrical wiring in high school many moons ago.
For completeness, here is what I am trying in the US.My switch developed a mechanical issue quickly but I now have a replacement to install. The switch would not turn off locally but the other switch & zwave work fine.
http://www.getzooz.com/zooz-zen23-24-toggle-switch.html

I think this is what you need. It is for Sonoff mini but wiring will be same for others.

It is but this requires 3 wires (2 + neutral) down the stairs. With the sketch in the Fibaro manual I linked you only need one (and one to the livewire, but that I assume to be available in both ends).

that’s true, I just understood from OP he has already old installation with mechanical switches at both ends working properly than he has most probably all this wiring in place.

You are correct, there’s absolutely nothing wrong with the current switches (toggle), I just want to be able to turn the light on / off using one of the modules and Openhab2

Ok but again make the mind switch from electrics to software. With your 2nd switch attached to S2 you can make use of extended functionality such as trigger any OH action on double or triple clicks or click-and-hold (better if you have momentary type of switches but it also works with on/off type).

Thanks Markus, appreciate the advice but I’d be a very happy boy with the on / off functions alone!

Those you get as well of course.

this is tricky and it’s not possible to my knowledge to do it both ways, just one.
There is way how to do it by insterting relays into the circuit, but I personally dont think it’s really good solution.

usual staircase switch does have master and slaves (can be more than one), master is not necessarily the one which physically switches light in question, this is something you need to know or figure out by current wiring.

The switch which is physically connected to the light will be your new main. Rest of them will be dummy, eg. connected ONLY to L(in) and N, eg. your L(out) will be not used on those.

for the wiring. I’m not familiar with Ireland regulations, but in EU since 2005 it is done like this 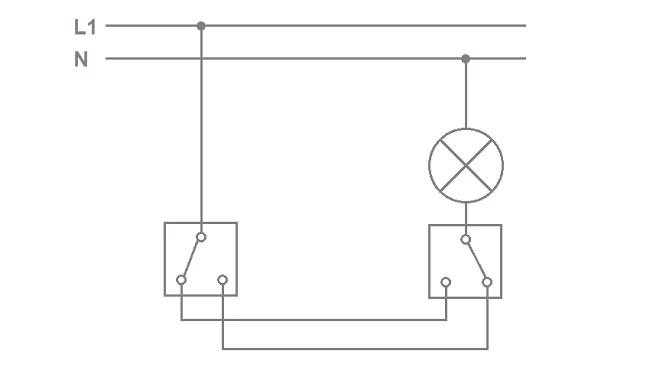 as you can see, only master is connected to L and carriing switchable L to the slave, which then closing the circuit, the third wire is carriing L back to the master switch when slave is used to switch light on.

in your new setup you will basically just need to use one L to bring L to the slave which will be used as master from now, and in former master just use L and N to power up your new switch.

And then you’ll need to switch slave and master ON by triggering rules, which I mentioned here.

If you are up to reflashing check this out.

I have a couple they work great.

I’m not familiar with Ireland regulations, but in EU since 2005 it is done like this

And this should be your current wiring diagram? Correct? 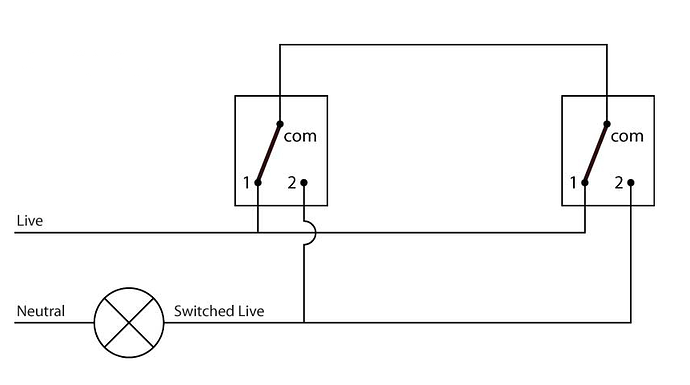 which does not mean much in terms of house regulations

But if he is living in new-ish building he should have described setup.

Practical wiring often looks nothing like schematics.
This may help in case you have loop-in, loop-out, and both switches brought back to ceiling fitting.
https://www.diynot.com/wiki/Electrics:Two-way-lighting

.
I don’t think so. According to Fibaro FGS-213 manual, it could be wired like this: 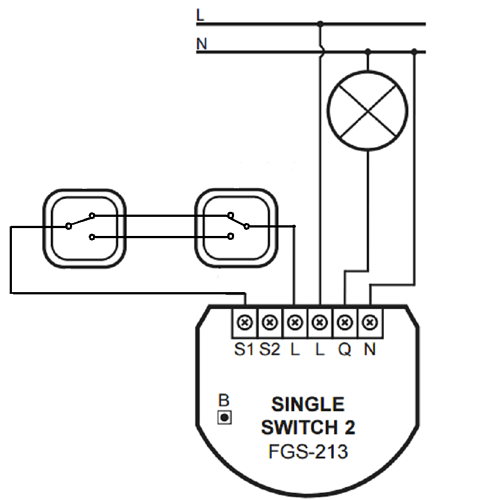 It all depends on how the lights and switches are wired.

I’ve got two places at home where replacing a set of three-way switches with wired in Insteon switches was trivial. Just tie all the live to live, neutral to neutral, and earth to earth, then connect the lamp to one of the Insteon switch’s load outputs instead of the live. Live and neutral went everywhere so the switches worked great. The two switches are then linked so they control each other, and the lights work just right from either switch.

Except that stupid light fixture is 20 feet up at the top of a stairwell and difficult to access safely. Grr. Still haven’t got that one wired.

I’m sure the Fibaro switches can do something similar; they look like they’re small and have terminals to wire into.

Until we know how the wiring is actually connected at those switches it’s hard to give a useful set of directions because there’s a bunch of different ways they could be wired.