Hi everyone,
I am trying to connect OH to my Raspberrymatic “CCU”, following the many tutorials out there. During my research I found quite a lot of threads about connection problems between the two, but so far none of the solutions worked for me and I just don’t know anymore what else to try out.

Systems
OH: openHAB 2.5.6 Release Build on Windows10 1909 (just getting started and trying to get stuff running) 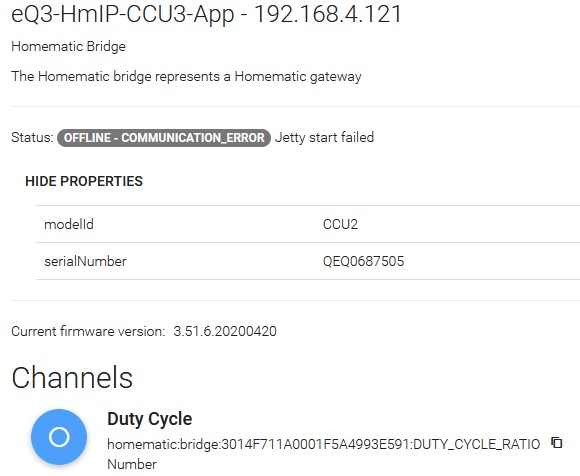 and less interesting I guess, the

These are the hints I found. Did I maybe miss something? Do you have a hunch which direction I could go?

Welcome to the Community!

Do you have a hunch which direction I could go?

Use the console and set the binding to DEBUG or TRACE and see if you get any additional info that may help resolve the issue.

your post caused me to finally open an account at this great community as well, as I now know that I’m not alone with my problems and that it’s not my own stupidity’s fault

The frustrating thing for me was that the Homematic binding just seems flaky, meaning that in general it works for me for a while. Sometimes for a few days (when I continued tinkering with openHAB) and just now for three weeks (when I did not touch the running system). At some point however, the homematic bridge loses contact to the RaspberryMatic (COMMUNICATION_ERROR) and cannot gain it back. The RaspberryMatic itself works fine and is accessible via XML-API.

What I try then, is removing the Homematic bridge thing and readding it. Sometimes that works, other times the bridge gets stuck at “INITIALIZING”. Just today that again happened to me. I was not able to get the binding to communicate with my CCU.

So, the last drastic step I do is the following, which always works for me (and just worked again today with 2.5.6):

After that, I can continue install and configure the rest of the bindings without Homematic not losing connection.

I moved my Homematic things (actually, all things) to a .things file instead of letting Paper UI manage it, because it is much faster just copying the .things file back to the new installation instead of clicking and configuring all the things in PaperUI.

Not sure if this helps you at all, but there seems to be problems with the Homematic binding support for RaspberryMatic, unless somebody else chimes in who seems similar issues with a “real” CCU.

Hi Jens,
welcome to the community.
I have the same setup - OH and Raspberrymatic. and had similar issue some time back but i dont remember how i solved it…

i was trying different settings in the raspberrymatic and restarting OH time-to-time and at some point it started to work again.

here are my setting in raspberrymatic 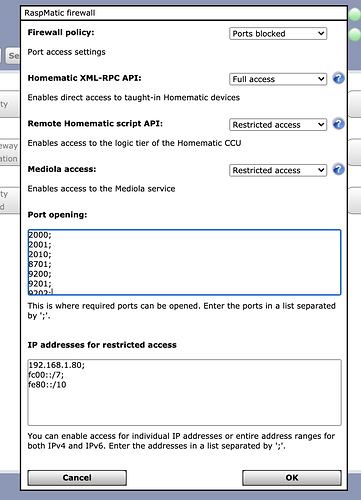 here are my bridge settings in OH things config

First, thank you all for your moral support. Today I found new energy to approach the issue.

Thanks H102 especially for the hint on the logging functionality, that is indeed very helpful.

That binding issue reminds me on the topic [solved] Homematic no pong / OFFLINE - BRIDGE_OFFLINE after update to 2.5M1. It did not follow up on it because I didn’t have an appropriate tool or experience ready to do the same analysis on Windows.

Now the exception “java.net.BindException: Cannot assign requested address” can be googled quickly, there is a detailed explanation eg in https://javarevisited.blogspot.com/2014/02/fixing-javanetbindexception-cannot-assign-requested-address-JVMbind.html (or many stackoverflow posts). The issue is caused by the local hostname resolution.

My nslookup tells me for my computer:

I could not find the answer to 1, but a solution 2

Now that I know the root cause and read through your answers again, @yfre gave the better solution:

OH things configuration of CCU, set in PaperUI or in things file
callbackHost = 127.0.0.1 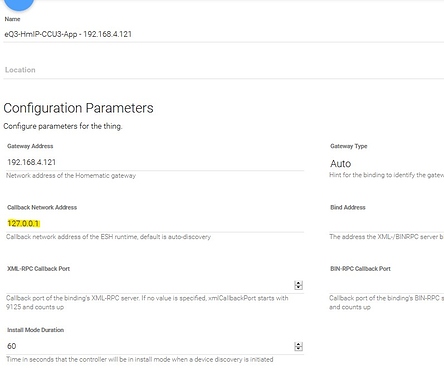 (you might have to disable the thing and re-enable to get it Online properly. Watching the DEBUG logging helps)

thanks for your extended explanations, but the root cause seems to have been a more simplistic one. I was running RaspberryMatic on a Pi B+ without problems for many years now. Fed up with the connectivity problems I gave upgrading to a Pi 3 B+ a try and voilà, all my troubles are a thing of the past (at least have not had any problems for the last two weeks, I hope that lasts). The Homematic Binding does not seem to like a sluggish counter part.