How can I display charts in two columns?

Thank you all for answering my earlier question about labelling charts.
Now I have a lot of charts, and BasicUI is wasting a lot of screen real estate by rendering them in one long column. Is there a way to arrange the charts in two (or more) columns?

As said before several columns are not possible.
Consider to show more then one item in a chart or use the visibility flag in order to display only the needed one.
See this example from my sitemap: 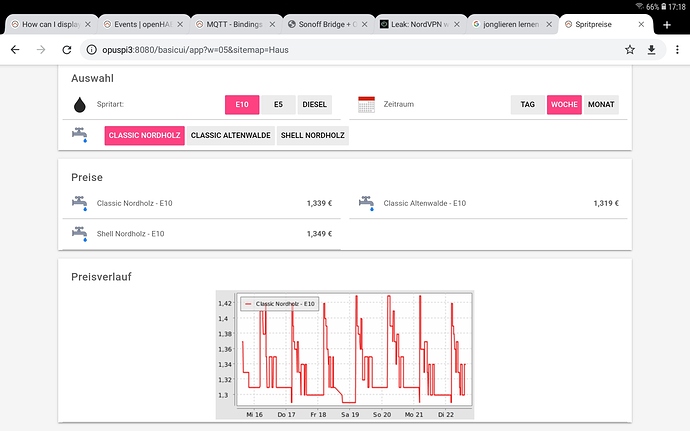 Thank you all for your replies so far. I’m afraid the most helpful one came from Udo Hartmann: not possible.
I’m aware of the options to have several graphs in one chart, and also of the option to switch charts. But the basic idea is to have the whole house at a glance so that I can better understand which radiator has which effect):

What I’m trying to do is to set up a NASA-like control center for temperature, open doors, open windows for the entire house so that I can optimize the dependencies between open doors, open windows and target temperatures.
For example, my subjective experience is that in my office in the basement, temperature changes when we open doors and windows on the first floor to let fresh air into the sleeping rooms, but not enough to trigger the thermostat’s “window open” reflex. so it would make sense to adjuts the target temperature in the basement until everything is closed again, or to even disable that radiator for a certain time.
… and so on …

BasicUI is … well, basic.
You may be interested in HABpanel.