How to add Wifi to a cheap smoke alarm

I thought I’d shared what I’ve done here with a few smoke alarms to integrate them with OpenHAB.
For years I’ve had regular battery-operated smoke alarms in some rooms, but it would be nice to also get notified out of home if they were ever to go off.
However I didn’t want to spend boatloads of money on funky z-wave or KNX smoke alarms, and there was no wiring or space for putting any in.

Adding an ESP8266 and therefore some Wifi was the obvious temptation, but it would have drained the alarms’ 9V batteries within little time, even if using the chip’s power saving modes.

So I went looking into using a ESP12E module together with a voltage regulator and switch it externally triggering on a signal output from the smoke alarm.
However it felt clunky, the voltage regulator was a huge waste going down from the 9V battery to the 3.3V of the ESP8266 and there were some leak currents using a switching transistor.

After some searching, the pieces however came together:

So how does it all work now?

Now if the smoke alarm goes off, the step-down converter starts supplying the ESP8266 module with current and it starts up.
What you do on there is up to you, you could just use a tiny Arduino program that connects to Wifi, enables the Openhab switch item via HTTP request and then goes to deep sleep or something.

For convenience I flashed mine with Sonoff Tasmota because that’s what I have on most switches and stuff. It’s complete overkill but whatever…

To limit battery waste I set the “sleep 250” parameter in there so it idles reasonably after the initial connection.

I then use the LWT MQTT topic where it announces that it’s online and tie that to the smoke alarm item.

The online.map mapping turns the LWT status into ON/OFF

and thens switchtrigger.map turn that into the status text for display

And what does the overall setup look like? Here’s a peek into the finished smoke alarm: 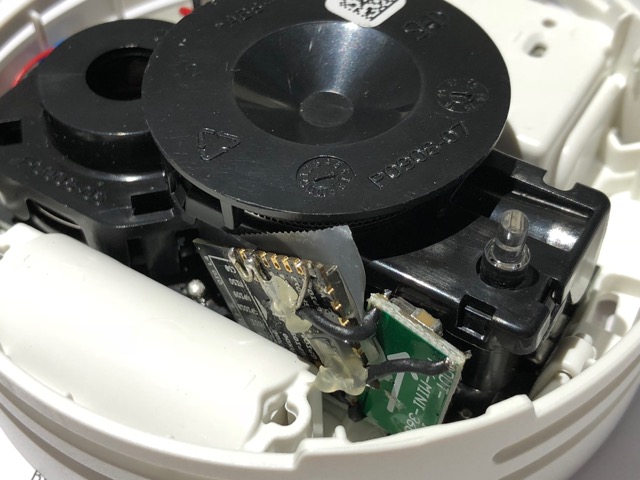 And the other side of the boards, here you can see the connection to the power and signal pins of the smoke alarm, the resistor added onto the MP2307 and some hot glue to avoid mechanical strain there. 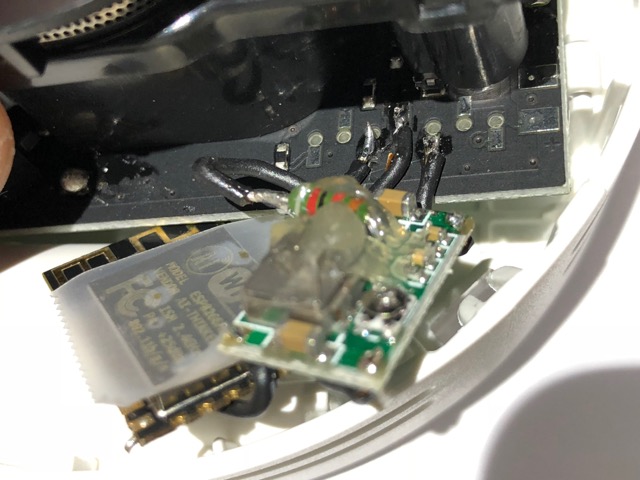 Don’t forget to test this well if you build it yourself!

Excellent build idea, trying it out myself. What size resistor did you use and which leg is pin 7 on the mp2307?

Any concerns about insurance coverage in case of a fire and they find out you modified the alarms?
Depending on your local legislation, alarms may be required and need to comply with certain standards. Even if it may not affect the function any certification will be lost by a mod. And insurance may want to blame you for it.
Could still be cheap if you put an original one right next to it. I.e. one for the legal issues and one for your system integration.

@pnuding , Thanks for posting this topic. I was facing similar doubt and was looking what to do next. Thanks for your solutions.They were quiet informative and helpful and it worked for me.

For the resistor you can use anything large (10k or higher) you have lying around. This is really just a precaution so there can’t be any current flowing here.
Counting pins on the 8pin package - usually pin 1 will be marked with a little pit, you count up to 4 as you follow that row to the right, then on the opposite side you go back from 5 to 8. So pin 8 will be right across from pin 1 where you saw the pit.

Yes Mhgglmmr, if in your location you have any legal or insurance requirements you probably have to be careful there.

Thanks pnuding, nice little weekend tinker project for me

Btw i saw there are now also a few similar regulator modules on AliExpress that put the enable input on its own solder pad.
Haven’t tried them so YMMV but looks useful:
https://s.click.aliexpress.com/e/cZ1omB48

Just purchased a kidde 10sco and have had the internals out of it and im scratching my head on what to do next. It has 5 io pins on one side. I’m guessing I need to test all those pins for continuity to ground once the alarm is activated to find out which one is the signal pin?

This is a very different device, so I’m not sure what signals it might output. If you open it and check what chip it uses (if it’s not something custom) you might find documentation for it like I did for that microchip smoke alarm chip.
In any case the first thing would be to check if any of the pins you see changes voltage when an alarm is triggered. I wouldn’t use the continuity tester as that applies an external voltage which may be harmful for the device