How to make a vornado-fan smart?

Hi, i have a vornado-fan in my living room. 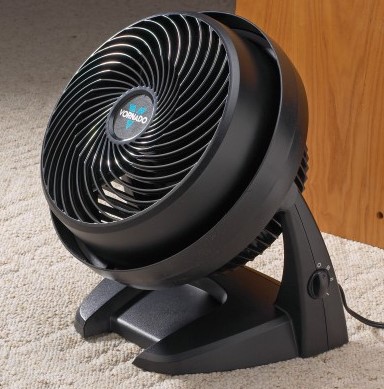 We have a floor heating and the ability to cool with this too. My heating pump can pump cool water through the pipes. But floor cooling is not very efective, because of physics. Cool air is down and will not go up. So i use a fan to blow the air around in my house. This works good. But it would be better, if my fan would be smart.

Can anybody help me with this? My fan has a switch with 3 states (off/low/high). Maybe i can install a sonoff inside the base of the fan. Which sonoff would be the right one for this?

And another question: Is there a way to controll the power of the fan not only high/low? I think of pwm control? So i could send a percent value to the fan and it would be a real speed control? Will a simple fan work with pwm (pulse width modulation) or maybe any other technology (analog control)?

Which sonoff (or other device) would be the right for this idea?

Hi,
The first thing I can think of (and the simplier) is to plug it in a Smart Plug, then you can leave it on the speed you want and turned it on and off from the smart plug.
Pros: very simple, no need of soldering and crafting anything and with the right smart plug you can also have power consumption metering.
Cons: You cannot choose the speed.

I already have a whole knx installation inside my house, so i can control on/off already. But i want it to be more smart.

But i want it to be more smart.

Then you may need to open the housing (while unplugged!) and see what kind of switch is used. Separate buttons, rotary switch, touch, momentary switch, ect. Also what voltage level is switched? High voltage like 110V or 230V, or some lower voltage like 12V?

BTW: If high voltage, I would advise against tampering with it at all, unless you know exactly what you are doing. Never underestimate the dangers of electricity!

Maybe it would be enough to just plug it into a plug which can control pwm? But i don´t know if a simple fan can be controlled with pwm at all?

For computers, there i need special fans to control them by pwm i think? A simple computer fan will not work with pwm? Maybe it is the same with “big” fans too?

There is a itead/sonoff fan02 controller, but only with 3 steps to control it, 1/2/3. I would like to have more control about the fan speeds.

Maybe it would work when i connect my fan to a lights dimmer? I have a knx dimmer for my lightings and there i can select which type of lights i have connected (old light bulbs, led, …)

Will this work with a simple fan?

I have this one: https://www.mdt.de/Dimmaktoren.html

Now that the disclaimer is out of the way:
Recently (just a few weeks before I started playing with arduinos and other microcontrollers) I had an air curtain (basically a big, wide fan) which was a little too smart for its own good. It had two speeds (off-low-high) but the only control was by infrared remote… and it did not remember its state. If it loses power, and you wanted to get it going again, you had to use the remote. I wanted it to be powered by a door switch, so that it would be on only when the door was open. So, I had to remove the IR circuitry and power it directly.

It’s exactly the opposite of what you want to do, but here’s where my experience may apply to you.

My fan coil physically has two windings.
Power one of the windings (220v) for low speed
Power the other winding (220v again) for high speed.
Power both windings at the same time, and it probably catches on fire.

The relay board had two relays, and it would close either one of two relays, or none. Never both.

Your fan motor MAY be similar. I would guess it’s not PWM in a simple fan like that, and it can’t be a voltage divider because that would get too hot. It’s probably two separate windings. I don’t think this fan would be happy on a dimmer. Even if it worked it’s going to buzz annoyingly.

By disconnecting the fan windings from the switch, you can measure the switch and see what it does. You cannot measure while it’s wired in, because the unpowered winding will act as a generator while the fan is spinning. I made this mistake, tripped me up for a while.

Anyway… because you mustn’t power both windings at the same time, Sonoff is NOT appropriate, because (if I understand correctly) they’re simple on/off switches. For something like this (when 220v and potential fire is involved) I prefer safety to be built into the circuit.

So, I would use two 2-way relays.
One for power on/off.
The other for high/low.
This way it’s physically impossible to power both at the same time.
Finally I would control these relays by an ESP8266, which can be programmed from the Arduino environment, and it it can connect to your WiFi. You may have heard of Arduino before. It’s the easiest possible microcontroller platform for beginners. ESP8266 is a bit more complicated (it does involve wifi after all) but nothing too bad.

Now, this involves soldering, and programming, and experimentation. Heck, you may even have to buy another fan if you kill your first one. It’s a heck of a project if you’ve never done anything like it before… but I promise it’s not impossible. Who cares if it takes you a month – it’s a great skill to have, and you have a problem to solve. That’s the best possible reason to learn something new… at least for me.

Edit: The SONOFF 4 Channels Pro R2 would work, if you’re not ready to get into microcontrollers yet. It has four relays (you only need two, really) and it exposes the NO and NC (normally open/normally closed) contacts. 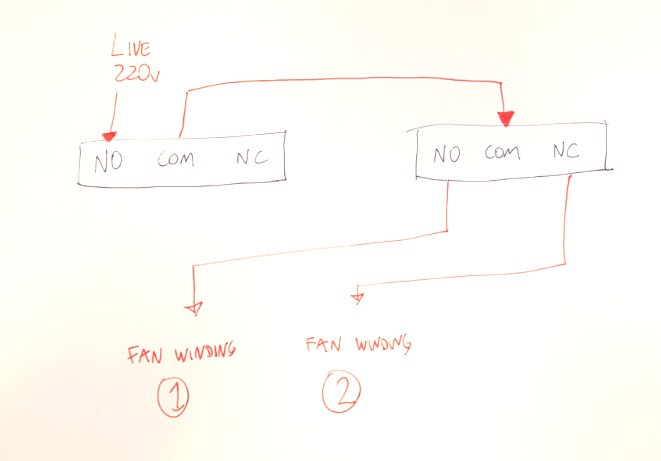 Physics has been ruining my plans and dreams for 40 years now.

Maybe it would be enough to just plug it into a plug which can control pwm? But i don´t know if a simple fan can be controlled with pwm at all?

I can’t say for this particular fan, but I do know for some motors and devices PWM can kill the motor. You would need to open the case and see if you can figure out how the motor works (https://www.motioncontrolonline.org/blog-article.cfm/4-Types-of-DC-Motors-An-Introduction/39) and then research to see if PWM will kill the motor or not.

There is a itead/sonoff fan02 controller, but only with 3 steps to control it, 1/2/3. I would like to have more control about the fan speeds.

This sounds like your best bet actually since your fan has three settings.

Anyway… because you mustn’t power both windings at the same time, Sonoff is NOT appropriate, because (if I understand correctly) they’re simple on/off switches. For something like this (when 220v and potential fire is involved) I prefer safety to be built into the circuit.

If I understand it correctly, the fan controller halloween mentions has three relays, one for each speed with built in logic to prevent more than one from being ON at the same time. I could be wrong of course.

Will this work with a simple fan?

I have this one: https://www.mdt.de/Dimmaktoren.html

This will most likely not work. It is a phase-cut dimmer, meaning it briefly cuts the voltage at the start or end of a phase of the 50 Hz wave form that 230 V AC provides in Europe. Without going into details, it vaguely resembles PWM signals, but for AC (alternating current) instead of DC (direct current). With coils (what a motor actually is) that can result in serious issues, including current spikes and humming sounds.

Your best bet is to use something @Leif describes, but from the looks of it that relay board is not gonna fit inside the fan, thus requiring hot (230 V!) wiring to outside the enclosure.

But we can keep speculating and making suggestions, for starters you just have to open the device and have a look…

I’ll bet you’re right. The only sonoff device I’m familiar with is the plain single channel relay, and even then I’ve only ever seen it in pictures.

Sonoff has a whole suite of devices. They are pretty popular and pretty capable.