How to reset/clear thing discovery cache

I submitted a bug report for some mis-categorized TRADFRI bulbs a couple of weeks ago. That got fixed no problem, so I updated my OpenHABian installation to run the latest snapshot build to take advantage of the patch.

The bulbs should be 0220 devices however, the two bulbs I already had are still showing up as the 0820 non color controllers.

I imagine this is just a caching issue, but I’m not sure where/what to clear. I’ve tried removing them from the jsondb in the userdata folder, but that had no luck. Maybe I did it wrong?

I also tried restarting the openhab2.service and that had no effect as well. 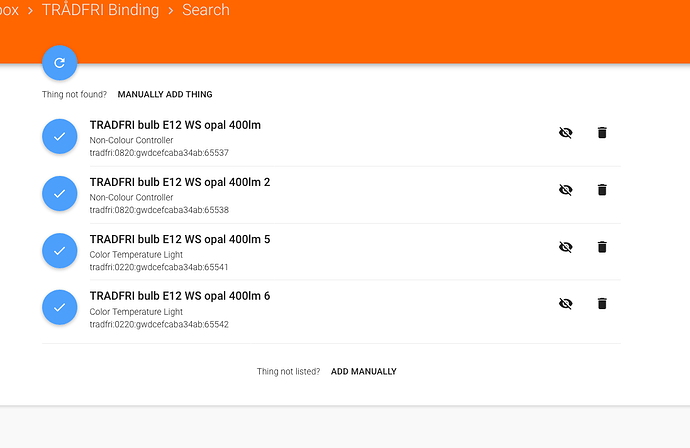 I know I didn’t provide a lot of time for a response, but I like to tinker!

I did not figure out how to clear the cache, but since the gateway adds devices sequentially, I figured removing the bulbs from the gateway (via IKEA app) and re-adding them would give them a new ID in openhab. I was right! The appeared as “new” things with the correct device type after re-pairing them with the gateway.

However, in the future, if the gateway decides to re-allocate those device IDs, I want the cache to be primed so as to not cause any issues.

So my question still remains, but at least I can turn the lights off w/ openhab now