I am a complete beginner and I am just trying the Hue Binding.
I have added lamps and the a dimmer switch to the hue app (bridge), but I see only the lamps and not the dimmer switch.
Is the switch not supported or did I make a mistake?

Which dimmer switch do you mean? 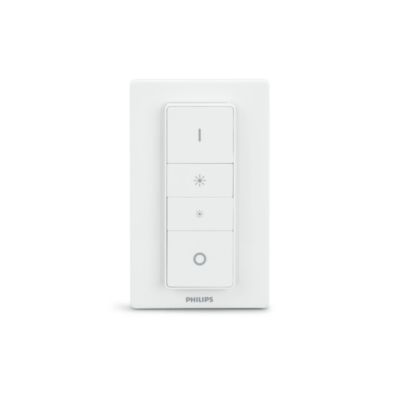 Enrich your system with the Philips Hue dimmer switch and enjoy smooth wireless dimming. The switch works as a normal wall switch and dimmer. Place it anywhere you want, using screws or the adhesive tape on the back plate of the switch.

You cannot control the dimmer switch, but you can control dimming of your lights:

Just add the dimmer item to your sitemap and start dimming …

Thanks,. Yes I mean this hue dimmer switch.
My problem is that the paper UI does not show this dimmer.

Only the lamps are visible as thing.
Or is the dimmer no thing?

It’s a remote, not a light device. What do you want to do with it through openHAB? Remote a remote?

Yes of course it is a remote.
But I wanted to configure the remote via openHAB.
If I press button 1 do that etc…

I am using at the moment “homee” and in this SmartHome Software the Hue Dimmer is also a “Thing”.
And I can select the “Thing” and change the buttons.

So how can I add this Hue dimmer remote to openHAB via PaperUI so I can add a rule?
If button 1 on dimmer dimm the lights and set another “Thing” state and so on…

Sorry for the stupid questions, but I am a complete newbie. I use openHAB since a few days

Sorry for the stupid questions

I have the Hue Tap but I’m assuming it works the same way.

In openHAB you have Things (your bulbs), these Things provide several channels (color, colortemperature, …) and you connect your Items (Switches, Dimmers,…) through the channels to your things.

In either way openHAB talks through the binding to the bridge directly to control your lights. The Hue Dimmer Switch is never involved.
If you set your Hue Dimmer Switch to dim a light to 50% openHAB will recognize that and set the openHAB Dimmer item also to 50%.

If you want to change the buttons of your Hue Dimmer Switch you should be able to do that through the Hue App or Hue graphical user interface opened in your browser.

It looks like there is a way to talk to the dimmer directly through the api, but I have no experience with that:

OK now I know the problem

If I want to change the buttons I have to use the Hue App.
So I am limited to the functions of the app.

This is the main difference beetween the smarthome “homee” and “openHab”.
homee connects directly to the devices and therefore the dimmer is a device (thing) I can set inside the smarthome software.
But openHAB communicate trough the Hue Bridge and a dimmer is not a “bulb” inside the hue bridge and so openHAB does not add it as a thing.

OK thanks I will check this thread.

Who would do that via remote? Today that is done via openHAB voice command, it’s fun

Yes this would be also a good way…
BUT my girlfriends needs a hardware to touch. She don’t like to talk to machines

And I am currently only check the features and functions from openHAB.
Currently I use homee, but I think I will change this to openHAB. So I check if I can do all I can do with homee.

Hi,
i know the thread has advanced a lot. But i like to add the “solution”.
The problem is that Philips does not expose the dimmer switch events to anything outside its own bridge. So OpenHAB can not get the tap notifications off the dimmer switch nor the tap switch (another device from Philips HUE). There are some hacks by polling the HUE api on the bridge to detect the events from dimmer and tap switch, but those would result in a lot of load or pretty much delayed responses to taps. So the short answer is: No, you can not use the Philips HUE Dimmer Switches or the Philips HUE Tap Switch to trigger things in OpenHAB.
It is not intended by Philips to open up the HUE System to these uses. Technically it would be easy to remove the restriction by Philips from the bridge software, but their support does not even react on any requests in that direction…
To have a useful physical tap switch in OpenHAB you need to use another supplier than Philips (i did not found a reasonable priced switch that worked well, but that would be another thread).
Kind regards
Matthias

Thanks for the clarification. I’m thinking of picking one of these Philips Dimmers as it seems like a reasonable deal.

So what I have in mind is to use the dimmer switch to control a certain ‘controller’ Hue bulb, then using rules in OpenHAB I can define what happens when that ‘controller’ bulb receives a command (whether from the dimmer switch or from any OpenHAB items). Once that rue triggers than I can send the command value to any other bulb on my system or control any other things. Eg. If the Hue bulb receives command ‘40’, then set any other lights I want to 40 and switch on the TV.

Would that be a feasible approach before Iay out 25 quid for the dimmer + a bulb?

Did you see this thread? You are able to use the HTTP binding to fetch the info which button is pressed. Which can be used to trigger a rule. But you have to live with a little delay.

Philips just announced at IFA that the DimSwitch, Tap and Motion sensors will be Homekit compatible soon. Does this mean that we can expect that those devices can trigger events via the API (push status changes instead of pull/poll intervalls?). How would it otherwise work with Homekit?
So let’s see how Philips will integrate this.

Tap and Motion sensors will be Homekit compatible soon. Does this mean that we can expect that those dev

Hey! It’s official now.
Does anyone know if it can be integrated to the Hue binding?

Any update on the possibility to integrate Philips Hue Dimmer Switch and Tap Switch with openHAB?

So, it is possible to include Hue Switches within openHAB, but not via the binding.
It can be done through the hue bridges api and the HTTP Binding.

Unfortunately this solution pulls the status change from the bridge in predefined intervals so there is delay.

I wonder how to get the switch press or motion sensor information pushed to openhab via the bridge.

While this wasn‘t possible in the past some months ago Philips announced integration of dim-switch and motion sensor with Apple Homekit. So I was confident that they implemented some push channel. However, maybe this only works with homekit.

Maybe someone here has further information concerning Homekit integration of dim-switch and sensor and how to use this with openhab to make the switch & sensors fully integrated devices with openhab.

Essentially it would mean that the Hue binding behaves like a HomeKit App, which has a public spec here: https://developer.apple.com/homekit/specification/. You do need an apple ID wich I don’t have. Are there any plans to use this API from the Hue binding? My gut feeling tells me that status polling could soon be a thing of the past