I wonder if anyone could share some rules, configurations etc how you are using ID Lock 150.

What I am looking for is how to use the additinal data sent in the alarm-raw event, for example to identify which code that was used to unlock the dorr.
But please don’t be limited to share only how you can identify the code, in what other ways do you control the lock, if you are doing some other cool stuff with the lock, please share

I found the following post showing how to parse the alarm-raw json:

Hey! I’ve made a lot of progress, but I haven’t posted any updates here so now it’s time. I’ve added the alarm_raw channel and I get the json string from that channel as anticipated. I simplified the code you wrote @5iver since I only have one lock (I assume your code included a solution for three locks). It is most probably not the most beautiful piece of code or most efficient, but it works and now it looks like this: //Rule for updating the lock status based on alarm_raw channel rule "Lock: …


but this is using the deprecated alarm-raw channel and I think there must be some other way of doing the same?

What do you mean by that the alarm_raw channel is deprecated? I havent updated my setup in some time so I’ve lost track. Is there something else replacing it? It’s still working in my setup.

The deprecated statement can be found in the documentation for the binding towards the lock when firmware version > 1.5 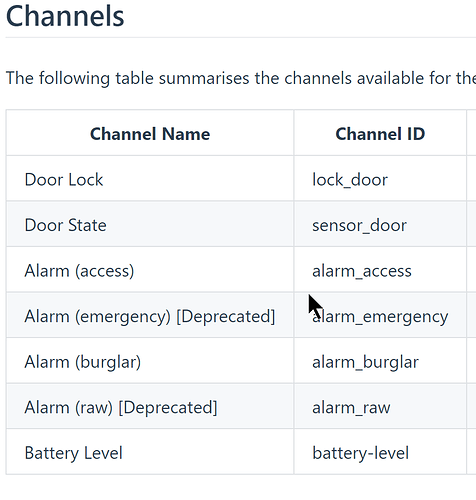 I created some rules based on the alarm_raw and it is working nice for me too, so guess it will not be removed in a while

I checked Id locks home page and they’ve released a new firmware of the module (1.6) where it seems like they’ve extended the functionality of the access control channel to cover what the alarm raw did. However, I don’t know how this will work in practice in OH2.

I’m moving out from my house and I don’t have id lock in the new one (yet), so it will take some time before I upgrade to 1.6 and start to test this. Hopefully someone else is brave enough to be the guinea pig until then