Import org.joda.time.* does not work

somehow I can’t make it work to use joda time in my rule. Even this simple rule does not work at all:

Any idea what is wrong?

Looking at the Joda DateTime’s JavaDoc, monthOfYear returns an int and int has not getAsText method.

The docs for Joda indicate what you may mean to do is:

Strange I got this example from a joda tutorial. However edited with your line…
var DateTime dt = new DateTime()
var String monthName = dt.month.getAsText()
logInfo( “FILE”, monthName)

SInce also this line: var LocalTime now = LocalTime.now()
gives an error I belive there is something wrong with the import.
I’m on rasbian wheezy with openhab 1.8

Strange I got this example from a joda tutorial. However edited with your line…

Not know what you were looking at I can’t comment. But the link above comes straight from Joda and says:

SInce also this line: var LocalTime now = LocalTime.now()gives an error I belive there is something wrong with the import.

Depends on the error but I doubt it is a problem with the import as there would be no DateTime at all if the import is wrong.

I highly recommend using Designer which will tell you if you have syntax errors or lacking imports.

It would seem that the month method is not exposed in the Rules DSL so we can’t get at the month name using getAsText. Perhaps it is using an older version of Joda.

You can try to get the month name as follows:

I think that String::format works with Joda time. If not just use Java’s built in Date object.

I have this now in my rules file:

It is not about getting the name of the month, it is more about in general getting the Joda things to work in my rules. Since it is easier and more elegant than the Java build in Date object.

You can force the issue by using:

However, I don’t know what version of Joda is in OH 1, whether the OH 1 Rules engine changes things around, etc.

One thought, if dt.month is static you would need to access it using the “::” operator (e.g. dt::month).

Beyond that I don’t know what else to offer for why the .month method is not showing up.

And also in the log:
java.lang.RuntimeException: The name ‘Calendar’ cannot be resolved to an item or type.

I don’t get it. The most simple time thing just does not work. Any hint?

I don’t know whether or not this is your problem, but I’ve had problems like yours because of duplicate class names. So when there is a Calendar class in the OH API it might use that one in your program, not the Java one. The only solution I can see in that case (as written not sure if this really is your problem but it sounds like) is to use the fully-qualified names as @rlkoshak mentioned.

sorry for not getting back. I had to restore my openhab machine.
After a bit more struggling with this I made it work

The turnaround for me was to get familiar with now.* and the use of parse().
I hope this might help others.

Did anyone get anywhere with this issue?

I feel as if i’m going round in circles.

Any help would be greatly appreciated

Does it run? I just added the following line to a rule and Designer had no problem with it.

Here are a few more working examples from my rules:

That seems to work. Although the designer still highlights them as unresolved.

I have just reinstalled Windows on my desktop due to a hard disk crash, and now my rules file that I have been using for the last 9 months is displaying this error.

I have tried restarting designer and rebooting the pc, to make sure all paths were set, but to no effect.

Even specifying the class produces an error: 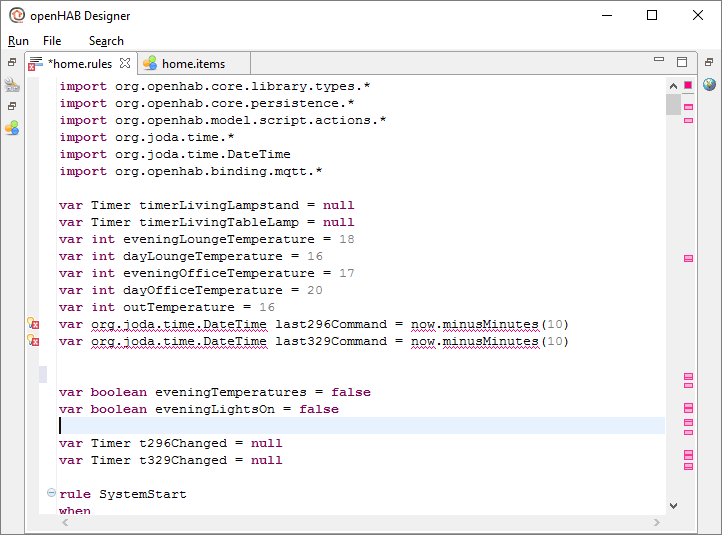 I’m looking for other suggestions to get rid of this.

Have you tried to import org.joda.time.DateTime

Yes, see in the image. Interestingly, the import doesn’t report an error, but then trying to use a DateTime, even after it has been imported specifically, does.

Did you read the rest of the thread? Designer currently has an unresolved phantom problem with ‘now’. What actually is the mystery error you see?

Designer currently has an unresolved phantom problem with ‘now’.

I’m seeing the problem with ‘now’ as well, but I think they are in the same package. Something in my new installation is causing this, but I have no idea how this scripting language resolves classes.

What actually is the mystery error you see? 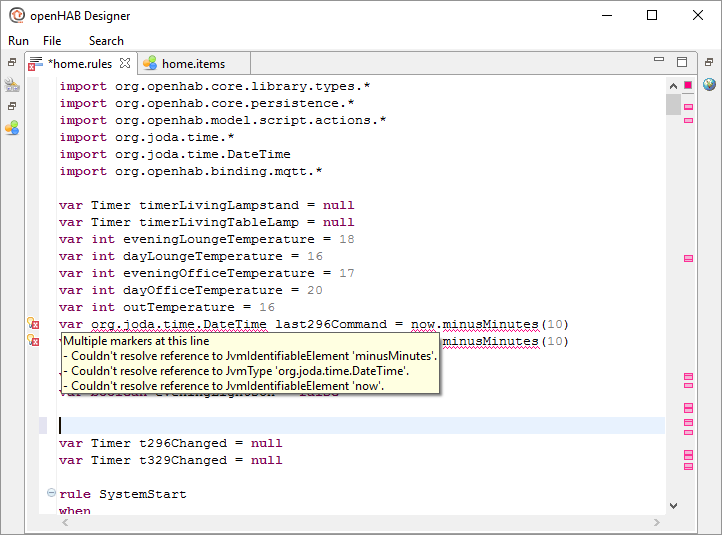 As @rossko57 said, there is a problem with the current builds of Designer that causes them to not recognize now and other joda classes. This is just a Designer issue. Does the rule run? If not then what is the error reported in OH?

The rules have been running fine for months, so its a designer issue.

If its a bug that’s been introduced in designer, is there a way to get a previous version that worked?

Edit:
I have just found and downloaded version 1.8.2, from bintray, which I think is the previous version (I can’t find any version info in the designer files). It is exhibiting exactly the same symptoms, so I’m not sure this is a designer bug or an installation problem.

I can’t find any older versions of designer to test.

Try looking on cloudbees. I think the error was introduced after 1.8 or 1.8.1.