I don’t know if anybody is interested but I have started to make an integration into Unity that is published on Github (OpenHAB In Unity). Keep in mind that this is not a well tested and in early stage. Currently these “widgets” similar to HabPanel available:

There is also a simple integration to InfluxDB for graphs and similar but as I am a lazy guy =) I use a payed library (Graph & Charts) from Unity asset store so I can’t include that in the repo. But I have a basic connection that is pretty much self explanatory if somebody wants to build there own integration.

The package is pretty easy to understand and there should be no problem to create your own widgets or expand if you know about as much c# development as me = pretty basic knowledge.
I have tried to document the source as much as possible.

Be aware, work in progress and only on hobby level.
I have only tested this on Openhabian on an Rpi4 (2gb ram) with OpenHab v2.5.

This is an example of working InfluxDB query put on a graph: 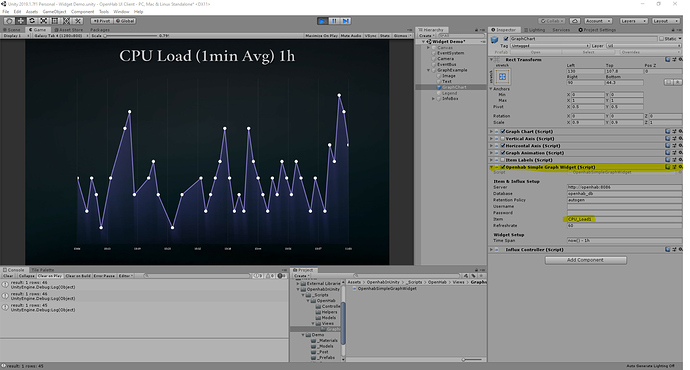 The graph assets are not included though, but an example of how to do it is available.

Sounds cool but could you Show us some Screenshots?

Yea…Im working on it. I’ll post it a soon as I have more info.