Some time ago I started experimenting with the openHAB API. As I’m a mobile developer in the Microsoft stack I started with a UWP project. I took in the HABdroid code and started converting bits and pieces until I could get sitemaps and items to load in the app.

From there on I contacted @Kai to see if I could get this to eventually become the official openHAB app for UWP, we’ve been mailing for some time now and it’s about time to involve the openHAB community in the project.

The repo is at https://github.com/openhab/openhab.windows feel free to fork it, read the readme and contributing guidelines and start writing awesome code for this app!

So where are we on the app? Sitemaps are getting loaded, there are working widgets for the most basic items like switches, sliders, text. There’s a settings page that has all the same settings as HABdroid, but only server url is working, no support for username / password protected openHAB installations or SSL just yet. The app works mostly on both mobile and desktop and we’re targetting both Win10 10586 (November update) and 14393 (Anniversary Update)

As you can tell, there’s still a lot of work to be done before we can push out a first release. If you want to help out, please do so! Let’s make this an awesome app!

Many thanks for working on this, a decent native Windows app has always been missing in the past! Do you already have some screenshots that you can share? 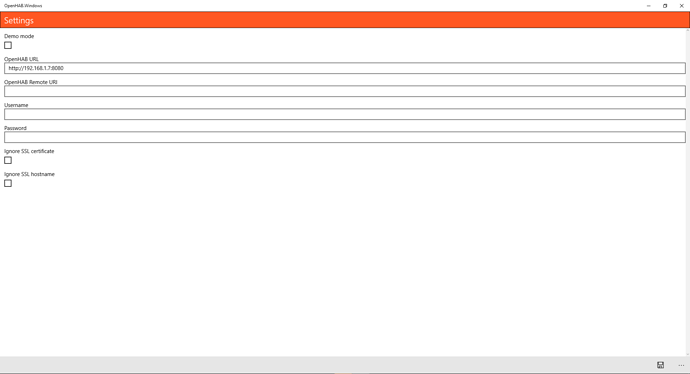 However with so much real estate on laptop and PCs I guess I was expecting a more widget like approach to go with the Modern Design of Windows 10, something you have in your mind already or do you mainly see this as an app for phones?

I’m mainly focussing on getting it on par with the ios and android versions. I have some ideas of a future design, but that’s for later

nice work. Is it placed in the windows store? Where can we download and test it?

it’s not yet at a state where it’s ready for test. I just had a talk with a designer, will work out something and work towards a first beta version ASAP.

Will this work with OH2?

Any updates?
We are a complete windows household (Tablets, Phones) and I’m intressted to test

I’m working on it, just finished implementing the switch design and the basics of the new design. Next up is the rest of the widgets.

I\m currently testing with the demo mode because that has quite a nice setup of different widgets, afterwards I’ll verify if everything works with my own OH 1.x setup.

Can’t really give a time frame as I’m doing this in my spare time and I also have another open-source project that I’m currently updating.