IoT Unravelled Part 1: It's a Mess but Then There's Home Assistant

IoT Unravelled Part 1: It's a Mess but Then There's Home Assistant | Hacker News

Many of us have moved AWAY from Home Assistant, including me. You like the local control and customization of HA. openHAB is even more flexible.

The grass always appears greener on the other side of the fence. Not too long ago I was getting frustrated here and decided to take another look at HA with my test system.

One major issue I had 18 months ago when I left was the lack of support in OZW for my North American devices. When I saw one of the paid developers released the zwave2mqtt addon for HA I took another look. It was not too long after an addon release. I found out it would not run properly without a workaround.

In contrast, I am testing the developing OH3 versions here with less breakage than I had with Home Assistant.

For reference, when the developers forces the unreleased version of Python on users, I was the one that wrote the detailed (23 step?) process to help others.

Thanks for the comments on your perspective Bruce. I never tried HA so I can’t comment. I just found the HackerRank discussion on the messy state of IoT really aligns with my own experience.

I moved here for a few reasons.

I find HA more agile for new devices…if ieven I want to see if new device is supports, that’s generally where I’ll find someone has done it…especially for some of our rebadged Ocenaia devices that aren’t prevalent anywhere else.

But their constant release cycle is one of the the main reasons I stick with Openhab. The constant upgrading is not great for stability.

The other really big plus for openhab (IMO) is the old style rules written in java(ish). THe closest ha can do is using an external system called appdaemon for python, else you’re stuck with their weird yml automations that I didn’t find intuitive for mulitiple conditions, and the action was always this json string specific for each item that just didn’t make sense to me.

Some of the features are cool though. I like how they have groups of devices, ie media players. And that presents a common interface for a number of actual devices that meet that specification. Openhab is way more open in that respent, ie a thermostat in openhab might be a conglomeration of 3 or 4 items. In HA that will be one this, that might in the background take information from a number of places.

And the simple recorder on each item that HA has, allowing you really quickly to see the state changes on a since item over a 24 hour period, the equivalent in openhab would be a influx or rr4j persisted item and a grafana widget to display the state over time. I keep meaning to do this for things like motion sensors.

@psyciknz - totally agree with you on the device types. In my python code, I have to add an abstraction layer for the devices. If we can push this further to the core, then that would reduce duplicate effort and make things a lot more structure. It would be a big mindset shift for OH though. It also creates more maintenance. The current OH model requires minimal change to the core to support new devices / sensors.

If you want to use pure Python 3 with OH, look at @Spaceman_Spiff HABApp classes.

Hi Bruce, I just took a quick look at HABApp. It looks great! I can see so many benefits besides Python3. To be able to decouple from OH would be a big gain IMO. There are strange behaviors with the current rule engine, and I find having to code and test Python code within the OH environment creates a long turn around time.

I will have to check it out. I’ve lots of code in Python 2 now, but it would be worth it to migrate over if the latency via the use of the REST API isn’t too bad.

I’ve lots of code in Python 2

Perhaps the Jython scripting would make more sense for you. Jython is basically Python 2 written in Java.

Clarification: I’ve lots of code in JSR223 Jython. Jython is basically at the dead end; there is no new development. The initial migration might be painful, but over the long terms I think it is a win. The code base will be cleaner. I’ve seen some strange behaviours with Jython when using loop comprehension.

I’ve lots of code in JSR223 Jython. Jython is basically at the dead end; there is no new development.

Any citation for that? Some here maintain it is still being developed.

Well, officially no one stated that it’s dead. But I was looking up their Git repo a while ago, and there aren’t much activities. You can also look at the various mailing list; almost zero activity.

At this point, the best that we could expect is patches on top of the 2.7 code line. I don’t see any development for Python 3. Keep in mind that Python 3 was released in 2008.

There is another option to use embedded native Python: GraalVM, but it is still a bit in the future.

I’ve been here with openHAB for just over a year. I made the jump originally from Wink to HomeAssistant because it was “so easy” until you wanted to customize the dashboard to either reduce the amount of stuff being displayed just because it can be displayed, or rearrange what you see there. Then it becomes a mixture between convoluted or broken.

I came here because it offered what I needed and didn’t want $5 a month for the cloud integration/alexa, but it takes elbow grease for sure. Not saying i wouldn’t pay for cloud, but $5 for access to something you’re still doing the work to maintain, i would have paid that to wink if i had faith they could keep their stuff online. Neither system is for the faint of heart, you have to be patient, you have to accept that it will take you longer to get where you truly want to be regardless of the system you choose and most important you need to be humble and be ok with asking for help. I mean it’s taken me almost a year to go from “cool I have openHAB working with my things” and porting them into HomeKit via home bridge, to all this time before I got around to actually learning how to work with HABPanel lol. To be honest, I also just started truly utilizing items and things and all the files aspects because I realized I needed them to make use of HABPanel.

Now we get to the stability, there have been very few times where things didn’t work over the release of 2.5 after the milestone builds. Yes I did have outages, whether it was my pi, or an update that hadn’t panned out the way I expected, but overall, fixes were implemented and my system returned.

I had to reinstall HA multiple times over the months of using it due to me breaking something and being unable to fix it. What I have found to be the mantra for me with OH, is realizing I unfortunately don’t have the time to be “bleeding edge” because it infuriates my wife and I’m not programmer smart enough to dig in to things and understand the code and understand (sadly but honestly) git processes. OH is the system that you choose when to update, you see what will be updated if you do the command line apt update and upgrade, so you also have an idea of what will be changed, and what to keep an eye on. HA you get what they give you and hopefully you can work through what is necessary to get things back online before your wife or significant other tells you they are tired of things just not working lol.

I learned with the 2.5 milestones that I need to wait for the full release of 3.0 and likely I’ll be moving to a new pi when I do that but will be after the first of the year. I’m not saying to not give HA a shot, just that you still need to be prepared if you do, it’s not a silver bullet that fixes everything you may perceive to be wrong.

I learned with the 2.5 milestones that I need to wait for the full release of 3.0

Actually the first release of 2,5 was broken for some new users. You maty want to wait for a second release. Then the documentation would likely be available too. Now the closest to documentation is some forum threads here.

In OH 3 you can see charts for any Item persisted to the default database at the click of a button. You can even put a line graph of the Item as a background behind the Item widget.

One of my temperature sensor Items in MainUI. 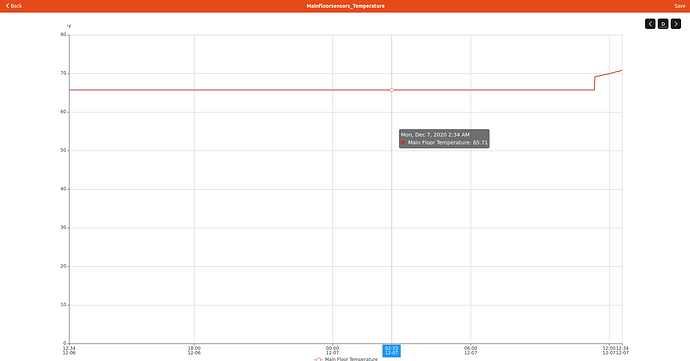 I built my semantic model so I can go to my Properties page and see a chart with all my temp sensors. 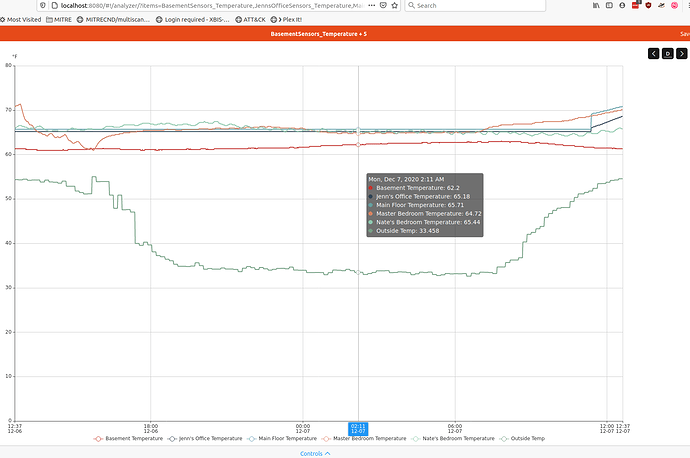 image1691×1124 88.8 KB
You can pick and choose the items to include and save the chart settings for later viewing.

Just something to look forward to.

There are strange behaviors with the current rule engine

Hope you have files issues for these. Or are you seeing issues with Jython itself and it’s not something that can be fixed in the Helper Libraries?

Note that HABApp can only interact with what is available through the REST API. The biggest thing you will not be able to do is use Actions.

@rlkoshak
There are 3 types of issues I see with Jython code, at least in the way that I use them.

So yes, HabApp is not going to be the silver bullet, but IMO it is worth a try. It is an interesting alternative approach.