Hi David, i still seem struggling to understand what changes i need to make in order to get the presence detection up and running again with the latest changes of the binding in the same way as it was before. With the “old” binding this worked perfectly well with my iphones. When they were entering the network, the status changed to ONLINE. Only when they left the network, the status went to OFFLINE. Now it seems that once the iphone gets into sleep mode, the status changes to OFFLINE with the last seen timestamp, even though the iphone is still within the network. This happens frequently over day of course and at night. This causes problems as i have based a couple of rules fired with the request if iphones are ONLINE or OFFLINE. I am wondering if this still is a bug, if this is the purpose or if i do need to change anything on the configuration to make it work again that only when the iphone is not in the Network, the status is OFFLINE. 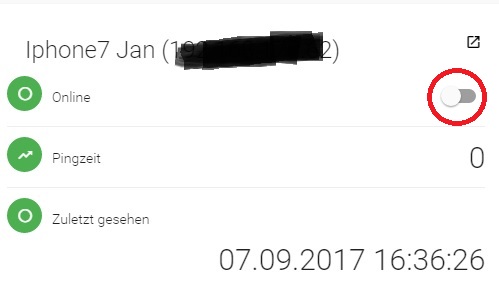 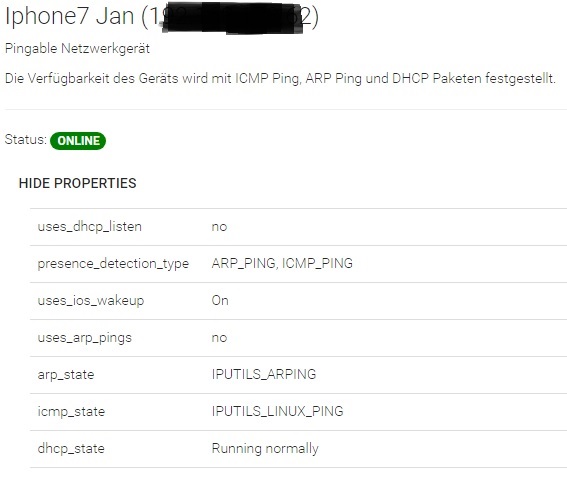 Hi David, i’m trying to use the new binding without the script file but it seams i’m missing something essential.

in paperui this is how my binding looks like:

arping can be used without sudo from terminal with the mentioned bath in the binding config.
from my understanding what i can see in paperUI of the Thing its not using arping at all.

See my properties. Also for me it seems that arping is not used

Oh, that “uses_arpping” property is not existing anymore actually. Ignore what it says. The other propery says that the thomas arping was recognised and will be used.

OK, so how could I know that the arping from the binding is working (as currently it seems not to work). Are there any logs I can enable that will help to debug it?

Do you suggest to move to iputils arping?

Can you get into the situation where nothing else then arping would work? Like a deep sleeping iphone/android?

It would be helpful if you could use the command line to try:

The binding can only be as good as the tools it uses. There is unfortunately no further debug than what you see in the properties, but if it is listed there, you can be sure it is used, in parallel to everything else.

As stated already, I have only tested it with the iputils arping. iputils needs a network interface to work and I add this parameter to thomas arping as well. Might be that the program is confused because of that.

See below results from command line to Alexa:

Maybe I will switch to iputils apring and see if it behaves differently.

It should respond with 1 result actually (c=count=1). Can you change the “-W 1000” which means timeout after 1000 to 5000 and see if the program halts the command line for 5 seconds? Because that would be the problem then.

Maybe "-W"s unit is seconds instead of milliseconds.

Thomas’ arping uses “-w” as well but uses seconds.
Older versions (ubuntu) do not support “-w” at all. Sigh.

-w deadline
Specify a timeout, in seconds, before arping exits regardless of how many packets have been sent or received. In this case arping does not stop after count packet are sent, it waits either for deadline expire or until count probes are answered.

You have one more other version of thomas arping. The other manuals say:

And found the reason:

It was fixed end of 2016. And some distros still have old packages I guess.

Yup, confirmed, you are a proud owner of an ancient, rotten, very old arping

But your version will soon be supported as well with the PR.

This is what I get from apt-get. Even after upgrade …

You are using a debian distribution. It is normal that some packages are up to 3 years old. The supported version is 2.19, you are on 2.14.

not sure if this is relevant here, but with a Raspi PI and arping these are the uage options you get, no capital -W option which is rejected if you execute with it.