Will iputils arping will work in my version (which version do you use)?

Correct, iputils arping. Could this be a root cause for my problem?

Presence detection never guarantees a correct answer. Please always try the command line first with the given tools (ping, arping). If those fail, the binding will fail.
We should be on-par with hping3 though. That was the goal with the recent additions.

With iputils arping it is much better, now I know that Alexa is online

I do see some issues with iphone detection, will check it and update.

@smhgit Can you confirm that the iputils arping works not as good for iphone detection than thomas arping? That would answer @muelli1967’s question.

Was just coming to write it

Yes, with iputils when iphone is off, no ping from arping:

so I cannot confirm it now (and not sure spo better to check it again).

Thanks! i will give it a try with thomas arping and let you know.

I have been following along your conversation and with my current (brand new) system set up, I am also on the old verson 2.14 of Thomas’ arping. How can I update arping to the latest supported version 2.19? If the answer is “compiling yourself”, I would need some instructions since I did not set up my pi other than installing OpenHAB (the Pi’s sole purpose).

Here are my specs (running on Raspbian Stretch Lite):

I have installed arping and hping3 through

I have tested thomas arping as well, but the iphone detection is not great here as well. same issue. The iphone gets detected, but goes to status OFFLINE quite quickly after the iphone goes to sleep modus.

I am back now to the 2.1.0 network binding and here the detection of the iphone works perfectly fine as it was before. It stays ONLINE as long as in range of the network, even in sleep modus. The enhancements in SNAPSHOT 2.2.0 are unfortunately not working for me right now. I will continue to follow the conversation for further development and happy to test at a later stage.

Thanks to all for your time and effort to work on the projects. Much appreciated.

Took the arping 2.19 (by Thomas Habets) for a spin pinging a sleeping iPhone 6S.

These are my properties: 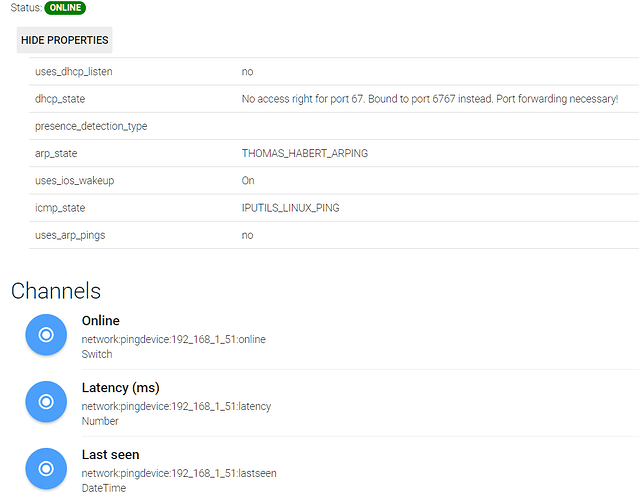 So is the arping reply interval of up to 94s as expected?
I also did the port 67 forwarding described in the binding doc, but uses_dhcp_listen is still a: no

When I check top (-V) I can see ping being run regularly, but never arping.
My toolpath is set to /usr/sbin/arping and the openhab user given privilege in sudoers:

Why is my arping never called?

edit: showing now after one additional restart of openhab
however i still have the same problem as @OMR in regards to the DHCP_state. all settings in regards to port forwarding are done as mentioned in the binding doc, but still getting the “No Access …” message.

Got it working and it seems to work really reliable for my P10plus.
however i noticed that in the config nothing is showing for the “Presence _detection_type”
is there a reason for that? (runninh lates bundel 2.2.0.201709102120) 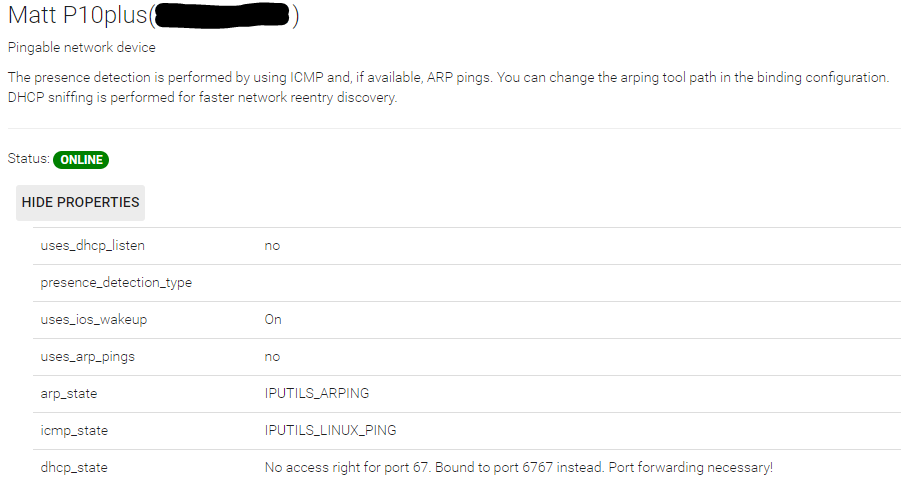 There’s another way: grant your java binary full network access. How to do that is described in the Openhab setup documentation.

The port forwarding section of the binding docu need to be reworked. It doesn’t work in all conditions the documented way. 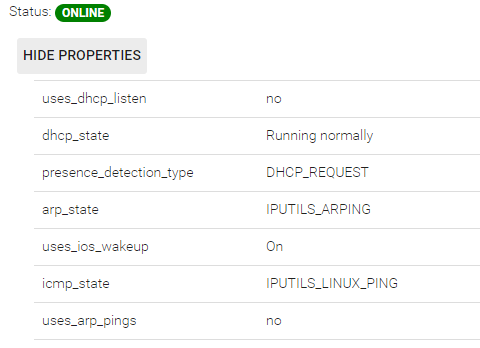 I am using RPI-3B with openhabian-jessie lite version,
I have installed ARPing with 2.19 version,

I have use sudo visudo and add below line,

I set a rule for test purpose, run command as below

do you know why? and what should I do now?

I’m pretty sure the openhab user is the right user in this case. OH runs as openhab, not openhabian, so openhab is the one that needs the permission to run arping.