I picked up a couple Philips Hue Motion Sensors, mainly because of the built in Temperature and Lux sensor, but also because of the reportedly long battery life of 2+ years per pair of AAA batteries, I thought that would be great compared to my current Sonoff motion sensors that need replacement batteries every 3-6 months. All the other topics I found were either 3+ years old, or using the Philips Hue Binding with the Hue Hub.

I have a HUSBZB-1 Zigbee/Z-wave stick that I use for all my zigbee and singular z-wave device currently (6 door sensors, 3 motion detectors, and z-wave light controller)

I thought it would be as easy as it was with pairing the other devices, I placed the Philips Hue into pairing mode, hit Scan under the Zigbee binding in OpenHab, it immediately found the device and added it. Then I went into the device and under Channels to get the zigbee channel details which I copied alongside my other working sensors, but no go, everything about it is showing as NULL.

I really don’t want to have to get a Philips Hue Bridge just for a few motion sensors unless I absolutely have to, but thought I’d check here in case something I’m doing is wrong, or needs to be done differently.

And channel details under the Things page on the OpenHab interface 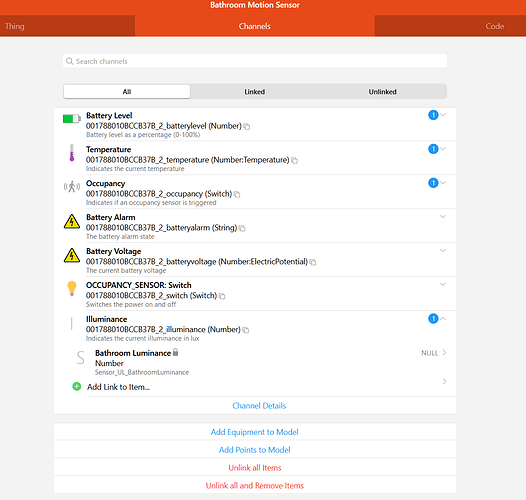 Just an update, not sure what happened but my google to OpenHAB integration stopped working, so I ended up just rebooting my OpenHAB VM, and it seems to be functioning perfectly now.

I didn’t think that would be an issue since everything else zigbee was functioning fine. No modifications or changes needed on my part.