That firmware has during the weekend been confirmed working by several community members with up to +20 dBM RF power output enabled, (tested in both Zigbee2MQTT as well as ZHA integration in Home Assistant), and according to Koenkk it has also been confirmed working by ITead’s own Sonoff Zigbee engineer using RF analyzer, so I think later if and when proven stable we can expect this version to ship with future batches.

PS: This new firmware version is also shipped as standard as part of Zigbee2MQTT 1.22.2 release.

FYI, not confirmed but someone now claims Auto-BSL is also working in the ZigStar GW Multi tool too: 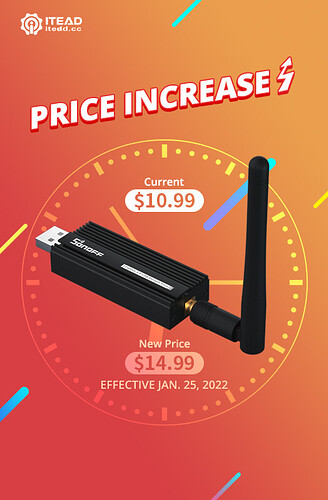 Is there any instruction what is the best way replace my old cc2531 to SONOFF Zigbee 3.0 USB Dongle Plus? - or maybe i can just remove old one and place new and OH3 and z2m automatically starts work?

maybe i can just remove old one and place new and OH3 and z2m automatically starts work?

If you play close attention to the instructions, yes:

Zigbee to MQTT bridge, get rid of your proprietary Zigbee bridges

Physical USB ports are not directly mapped to same serial port device path so need fix path, however, Zigbee2MQTT developers made it easy to migrate from an older Texas Instruments adapter to newer:

If want to be extra safe then make backups of both Zigbee2MQTT data directory which contain a high-level Zigbee network backup (make sure data/coordinator_backup.json if it exist) as well as do Zigbee coordinator low-level NVRAM to a file with zigpy-znp command line tools to a other offline storage:

Again, recommend upgrading the firmware on the new CC2652 based adapter before starting using it.

That is really off-topic for https://github.com/zsmartsystems/com.zsmartsystems.zigbee/issues/1226 but as I wondered the same and have drawn a few conclusions and made some educated guesses based on their history and period product was developed based on when it was finally released. So I posted an answer to that as well as a rant about some related speculations here instead:

First of all, the short answer is that CC2531 USB dongles do not have a separate USB-to-UART Bridge chip (also known as a USB-to-Serial converter chip) but all CC2652 USB does because the CC2531 chip has an integrated circuit for USB-to-UART/Serial conversion and CC2652 chip does not, and neither does CC2530, CC2538, or CC1352 chips, so all those need an external USB-to-UART bridge/converter chip if want to make USB-dongle and not a serial-dongle/adapter. Simple as that.

What I think is probably much interesting story is why does ITead’s Sonoff Zigbee 3-0 USB Dongle Plus have a Silicon Labs USB-to-UART bridge/converter chip on its board and not a USB-to-UART bridge/converter chip from a different manufacturer, as the Silicon Labs CP2102N chip they went with is more expensive than most other alternatives yet does not really offer relative better features on paper.

Well, I think that for starters, the Silicon Labs CC210x is known for being very stable and already had mature device drivers on all operating systems at the point when they were developing the product. So from that point of view, the CC2102/CC2102N chip they use is an excellent choice, but otherwise, the only noticeable feature of CP2102N USB-to-UART Bridge got a writable on-chip EEPROM so they can write a custom product description. To get that same feature with a writable onboard EEPROM they could have alternatively gone with for example WCH CH340B or FTDI FT231 series which are less expensive USB-to-UART Bridge/Converter chips also has onboard EEPROM with similar features.

The benefit of choosing a USB-to-UART Bridge with a writable EEPROM is that it enables the manufacturer to write a custom product description string to the USB chip which is seen by the operating system, (you can even change the PID and VID if you like but that is often not wanted since require registering and releasing your own unique drovers). And that having a custom product description string to the USB chip allows applications to add automatic USB discovery which can give a more streamlined user experience for new users. So that is a small feature that can make the initial setup much more user-friendly. See example → Community help wanted to whitelist all compatible Zigbee and Z-Wave USB adapters for automatic discovery in Home Assistant OS - Home Assistant OS - Home Assistant Community

However we know that ITead’s first Zigbee 3.0 USB Dongle (and also there Sonoff ZBBridge Zigbee Bridge/Gateway) was based on the excellent Silicon Labs EFR32MG21 (Silabs EFR32 Mighty Gecko Series 2) chip, but since that dongle was sold very barebone and basic without an enclosure or retail packaging, (it seemed more like an experiment to gauge the DIY market interest in a Zigbee USB dongle than a real attempt to market a new product category), so my guess is that even though it had design issues it was still very successful and sold well so they must have wanted to make a new nicer premium version of a Zigbee USB dongle for the retail market using knowledge from the lessons learned from that previous dongle model and feedback/input from buyers and the DIY home automation communities.

Anyway, I therefore simply assume that ITead probably initially planned to use Silabs reference hardware design with Silicon Labs Zigbee MCU chip and a Silicon Labs USB-to-UART Bridge chip combination in it until the world was hit with the current worldwide chip shortage and especially stock of that EFR32MG21 became very scarce globally. EFR32MG21 has almost been impossible to get in larger quantities during the last two years, (though ITead is still using EFR32MG21 its Sonoff ZBBridge Zigbee Bridge/Gateway) product). Hence they probably switched from Silicon Labs EFR32MG21 Zigbee chip to Texas Instruments chip in the middle of the development cycle and did not bother to also replace the Silicon Labs USB-to-UART Bridge chip with some other USB-to-Serial converter chip.

PS: Mentioned before that as the ITead’s "Sonoff Zigbee 3.0 USB Dongle Plus sold at a low price yet contain premium components I assume that ITead hope to make money on attach rate sales instead of simply sales of this Ziglee USB dongle alone, so recommend those new to Zigbee to also check out some of their other Sonoff branded Zigbee devices as well → https://itead.cc/?s=zigbee&post_type=product&type_aws=true

“Due to the price increase in the chip of Zigbee 3.0 Dongle Plus, we plan to raise the price in response to the rising raw material costs to ensure you still have an excellent experience in the use. The new price will be effective from May 3, 2022.” 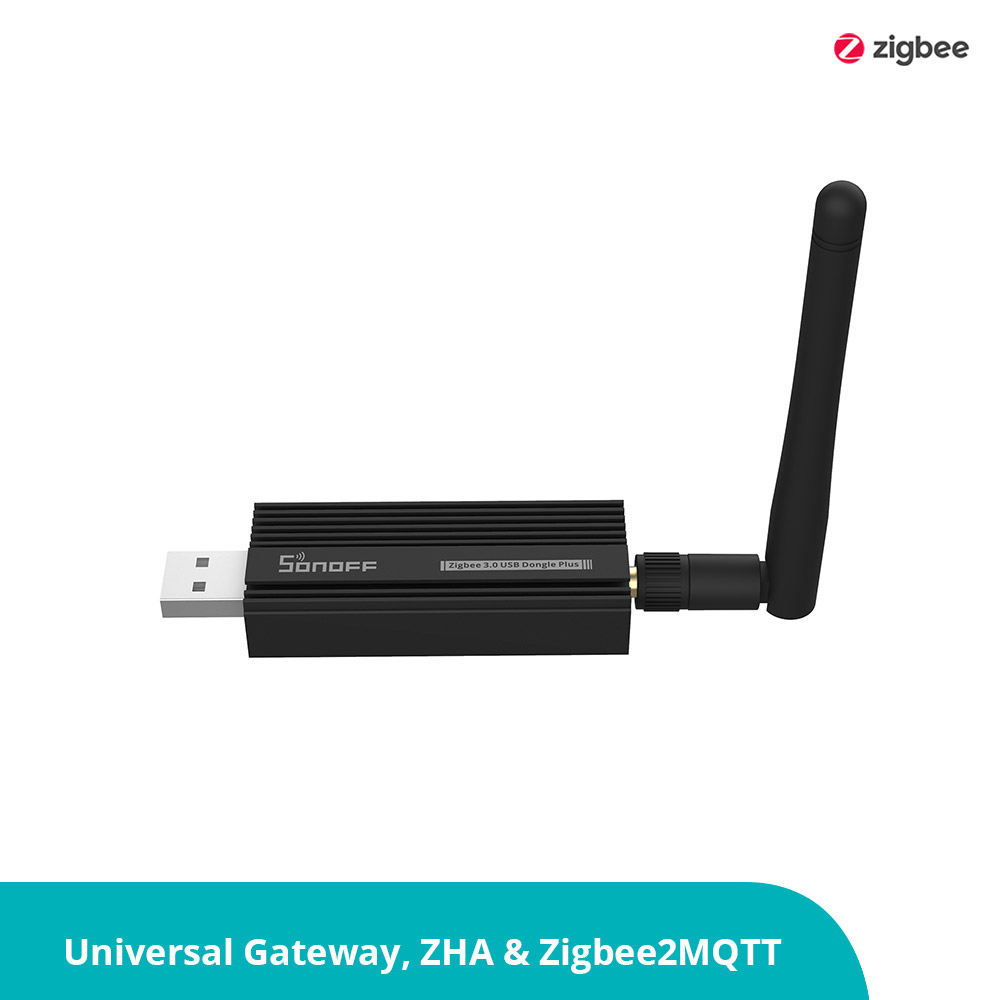 SONOFF Zigbee 3.0 USB Dongle Plus can be used as a Zigbee 3.0 gateway in Home Assistant or other open-source automation platforms via ZHA or Zigbee2MQTT to manage various sub-devices from various brands or flash router firmware to extend the network...

In their defence, is a fact that there is still a global chip shortage as well as an ongoing worldwide shipping-container freight crisis which are together causing havoc on the whole global supply chain, which the COVID-19 pandemic only made worse. So prices on many components will keep rising until all that is resolved, and that whole perfect storm situation is currently are not expected to get better until 2024 at the earliest.

Got mine today. Is someone working on integrating the adapter, or is it already working?

For now you have to go the zigbee2mqtt way. Its working fine…

My setup: rpi3 with openhab+mosquito+z2mqtt

Thanks, which adapter are you using? Is it addon, or something installed through command line?

installed the Sonoff one, good range, not expensive and ready to use.

For now you have to go the zigbee2mqtt way. Its working fine…

My setup: rpi3 with openhab+mosquito+z2mqtt

Is it addon, or something installed through command line?

Check out the Zigbee2MQTT (also known as “Z2M”) and MQTT guides/recommendations in these links:

PS: Regardless of Zigbee adapter remember to upgrade firmware and use a long USB extension cable, as well as make sure to connect it to a USB 2.0 port or a powered USB 2.0 hub (and not USB 3.0 port).

FYI, for discussing openHAB’s ZigBee Binding future support for Texas Instruments Z-Stack 3.0 and CC2652/CC1352 Zigbee Coordinator adapters (where there is no need for Zigbee2MQTT/MQTT), see:

FYI, ITead has now also released a new “ZBDongle-E” Zigbee dongle based on Silabs EFR32MG21 with similar specifications that will be sold side-by-side as alternative option to their CC2652P dongle in order to offer compatibility with applications not supporting TI CC2652 adapters with Z-Stack 3.0 yet:

FYI, ITead just released a new “ZBDongle-E” adapter as an improved replacement for ITead’s previous barebone Silabs EFR32MG21 adapter and an alternative to ITead’s TI CC2652P based “Sonoff Zigbee 3.0 USB Dongle Plus” (which is now renamed to “ZBDongle-P”). https://itead.cc/product/zigbee-3-0-usb-dongle/ [image] Both can act as either a Zigbee Coordinator (by default) or Zigbee Router device (if flashed with such firmware instead), and if flash OpenThread/Spinel Radio Co-Processor (RCP) firmw…

FYI; @leonschenk posted now in OpenHAB community forum here Discussion about Texas Instruments Z-Stack 3.0 and CC2652 and CC1352 Zigbee Coordinator adapters with openHAB ZigBee Binding - #4 by leonschenk that he now picked up the development where @t-8ch left it, forking his branch of the zstack driver with Z-Stack 3 support to GitHub - leonschenk/com.zsmartsystems.zigbee at zstack/initial in order to continue the work of adding initial support for CC2652/CC1352 based adapters with Z-Stack 3.x.0 Zigbee Coordinator firmware Z-Stack-firmware/coordinator/Z-Stack_3.x.0/bin at master · Koenkk/Z-Stack-firmware · GitHub so hopefully once he feels it works good enough for review he will create a new pull request to the com.zsmartsystems.zigbee ZigBee Cluster Library Java framework/libraries GitHub - zsmartsystems/com.zsmartsystems.zigbee: ZigBee Cluster Library Java framework supporting multiple dongles that the OpenHAB ZigBee Binding ZigBee - Bindings | openHAB and other projects depend on.

FYI, the new “zstack” driver in development by leonschenk for Texas Instruments Z-Stack 3 dongles is now ready for testing if anyone to help test CC2652 based adapter with openHAB’s ZigBee Binding:

Back-story; openHAB’s ZigBee Binding does not yet support new Zigbee Coordinator dongles/adapters based on Texas Instruments CC2652 or CC1352 with Z-Stack 3 (TI Z-Stack 3.x.x firmware) that other projects such as Zigbee2MQTT recommend because there is not yet driver for it in the open-source com.zsmartsystems.zigbee library which it depends on. https://github.com/Koenkk/Z-Stack-firmware/tree/master/coordinator/Z-Stack_3.x.0/bin https://github.com/Koenkk/Z-Stack-firmware/tree/master/coordinator …

I am new using OH. I’ve installed OH 3.3.0 on a Rpi model 4 x64. I have also a Sonoff ZB Bridge and a Sonoff Zigbee 3.0 USB Dongle Plus (ZB Dongle-P) which is the one you talk about on this conversation.

I’ve created in OH3 a MQTT Binding and also a MQTT Broker “thing” that doesn’t work. I guess next step is to connect the USB ZBDongle-P and connect it to the “thing”? I am quite lost.

I’ve been reading and reading but everything is quite high level so not sure what is next step. If I should install ‘zigbee2mqtt’ (if I do, I can access via SSH, but how do I access the console as root?) or flash the USB dongle.

Do you know if is there any tutorial step by step for newbies?

Don’t use a Wifi-to-Zigbee bridge to avoid latency issues.

Use a USB extension cable between your RaspberryPi and your Zigbee stick to reduce EMI.

Thanks for the detail write-up Hedda. A month ago a had a firmware corruption on the CC1352. I had to spend quite sometimes troubleshooting it before finally having to re-flash the firmware. At that point I decided to order the Sonoff Zigbee 3.0 USB Dongle Plus. I just successfully integrated it with zigbee2mqtt, which didn’t require re-pairing.

I used the cc2538-bsl tool to re-flash the firmware, and the instruction at zigbee2mqtt (primarily to change the IEEE address on the Sonoff stick). After that, zigbee2mqtt was able to pick up the new stick and all existing devices.

If anyone is looking at buying, currently Sonoff is having some discount on this stick (good till Dec 31).