Jfrog repo is down, can't install OH nor add-ons

You probably need to restart OH after putting the kar file there too.

Yeah I did restart it, where without the kar file being present I was seeing timeouts when attempting to fetch the necessary assets, I’m not seeing them in the logs any more which suggests to me that it has found the addons kar.

However what I am now seeing in the logs is entries like this:

Is there a way to install openHAB 3 and without repositories please?

Success, I should’ve just left it to do its thing for a little while. I left it for 20 minutes and restarted the service and all the addons were present and accounted for!

Is there a special reason for converting this thread into a private message?

In the two years or so that openHAB has been fully hosted on Jfrog, this is the first long outage. Before that the OH artifacts were hosted on Bintray which was owned and run by the same company and there were no extended outages back then at all that I recall.

I don’t think it’s fair to throw Jfrog out or claim it’s completely unreliable based on this one incident (though the longer Jfrog remains offline or if these long outages keep happening that is another story). This does make it clear we need a place to host the build artifacts as a backup plan-B though. But the fact that we don’t have one already is evidence of the fact that Jfrog and Bintray before it have been very reliable.

Also note that Jfrog isn’t just a file store where we dump jar file and kar files. It’s an entire build pipeline. It’s fundamentally integrated into how the OH build artifacts are created automatically every day. Moving to some other service would be a relatively large effort.

I know of no equivalent service that would be more reliable. Atlassian stuff is offline at least once a quarter it seems in my organization. If someone is knowledgable in how OH uses all of the services provided by Jfrog, as well as the equivalent services we could move to I’m sure a separate discussion on a GitHub issue would be very welcome. But given the effort involved, if I were a maintainer, I’d want more assurances that the services being moved to are indeed actually more reliable than Jfrog. That could be a hard thing to do. Even companies like Amazon and Google and Microsoft have experienced extended outages over the years.

In the mean time, I think it’s worth pursuing a “plan-B” for when Jfrog, or any other cloud service that the openHAB build and artifacts depend on goes down there is a backup way. I think institutionalizing posting the .kar files to the release notes on GitHub going forward (assuming we haven’t been doing that all along) would be prudent as well as making sure all the usual helpers here on the forum know to tell people to look there when/if an outage like this occurs again.

Is there a way to install openHAB 3 and without repositories please?

Depends on how you want to install. apt and presumably yum and dnf are not going to work. openHABian uses apt do it’s not going to work either. However, a manual install should work if you can download the openHAB zip and the addons kar files.

The .zip and kar file for the snapshot can be downloaded from https://openhab.org/downloads. Select “snapshot” for the version. Then follow the manual installation instructions to set it up (pay attention to the prerequisites though). Download the add-ons .kar file and put it into the addons folder under where-ever you unzipped the openhab.zip file to.

I’ve been running the latest snapshot since these problems with Jfrog started and I’ve had no problems. It’s probably a pretty safe bet if you want to get a new install up and running quickly.

Unfortunately I cannot find any place where the zip file is available for download. So you probably will not be able to install from scratch. But if you already have OH installed, see above for links to the addons .kar files in the release notes (@Confectrician’s post above). Download that file and place it in your addons folder and OH will grab the addons from there instead of trying to download them from Jfrog.

See the installation docs for how ever you’ve installed OH for the location of the addons folder for your installation.

If you are after a version of OH different from the above, you are, for the moment, stuck.

Is there a special reason for converting this thread into a private message?

Hmmm, not sure how that happened. No, this should be public. My phone must have pocket clicked around on this page or something. I took no deliberate action myself to change it. I’ll see if I can change it back.

In the mean time, I think it’s worth pursuing a “plan-B” for when Jfrog, or any other cloud service that the openHAB build and artifacts depend on goes down there is a backup way. I think institutionalizing posting the .kar files to the release notes on GitHub

We discussed this yesterday already and added the workaround files, after coming to this alternative.
We may also use the GitHub Release Assets in the future as primary download source for the homepage, based on this idea, so that the manual downloads should be independent from whatever service will be used.

I think it would be beneficial to at least have the package files available somewhere else with some type of alternative link or mirrored site so at least we keep the core system available. That aspect seems relatively easy to accomplish without needing to completely overhaul the way the system works. But I do agree, just because we have 1 long outage does not mean jfrog is bad just means it might be a good example of why a plan b might be needed.

56 hours downtime is eternity in the world of cloud services. I’m not sure what impact this downtime will have on OpenHab image, how many curious souls are never going to experience OpenHab because they could not install it in the last few days. In the world of opensource/free software often there is no second chance. I’m not sure how many people use OpenHab for mission critical applications, I definitely was annoyed my lights, alarms and scrips did not turn on or run on their schedule, I will survive having to turn on the alarm and turn the lights off by hand only hurt my feelings. I would definitely continue to use and support OpenHab but I will also start looking for a backup plan.

The .zip and kar file for the snapshot can be downloaded from https://openhab.org/downloads . Select “snapshot” for the version. Then follow the manual installation instructions to set it up (pay attention to the prerequisites though). Download the add-ons .kar file and put it into the addons folder under where-ever you unzipped the openhab.zip file to.

All i get here is a .mid file.

I found the needed .jar files inside… some addons don’t work and it seems because of missing dependencies…

What are kar files instead of jar files?
Where do i get the needed .kar files?

All i get here is a .mid file.

Which file are you downloading? If you are doing a new install, you need both “Latest openHAB 3.4-SNAPSHOT Build” and “Download openHAB 3.4.0-SNAPSHOT Add-ons”. The former is a zip file you need to unzip and place somewhere (e.g. /srv/openhab). It’s contents look like: 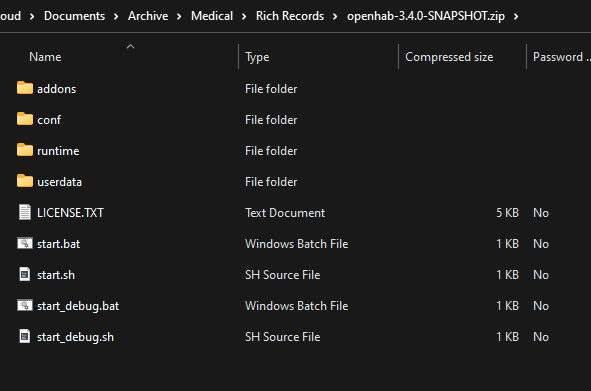 This is all explained in the manual installation instructions I linked to above.

Once you have that unzipped, you need to download the second download, the addons .kar file by clicking on that second “Download openHAB 3.4.0-SNAPSHOT Add-ons”. All you do with that file is put the whole thing into the addons folder under where you unzipped the zip file. Don’t open it. Don’t extract anything from it. Just put the whole .kar file, unmodified, into your addons folder.

Once it’s there restart OH (if it’s running) and when it starts back up it will install your addons and their dependencies from the kar file.

What are kar files instead of jar files?

Where do i get the needed .kar files?

See above. There is only one.

Interesting datapoint: Jfrog claims all services are now operational since about 9 hours ago. Curiously the openhab repository is still down.

It’s a known issue that a lot of browser change the file-extension .kar to .mid on download. This is very annoying but can’t be changed AFAIK.

We are still working on trying to reach out to Jfrog. In the mean time we are also discussing changing how we store artifacts so something like this would not affect normal OH usage and downloading going forward. Unfortunately we are in a tough spot as we have little to no control on the JFrog service. I’ll post back here if there is any update.

I’ve heard of them blocking certain extensions but not changing them. That’s annoying indeed but it’s just the extension, right? Once downloaded one can change the extension back and it’ll be fine? We could add a little note to the downloads page to that effect.

Yes, Mozilla calls it “sanitize file extensions”, they just change it to what they think is correct.

So i rename the .mid file into an .kar file and put it into my addons folder.
I already installed OH and was just updating to the latest milestone. So no reinstall of the whole thing.

We are still working on trying to reach out to Jfrog

@digitaldan in case it might help you, I think the issue is related to DNS; It looks like connections to ‘www.jfrog.io’ are succeeding, whereas those to ‘openhab.jfrog.io’ are not. So perhaps the latter domain has got lost in DNS…