Looking for suggestions for tablet to run my HABpanel

So, it seems my ancient iPad 2 (1 GHz ARM, 512 MB, 32 GB) is running out of horsepower to run my HABpanel dashboards. As I’ve added functionality, my dashboards have become more and more sluggish, and they frequently freeze up. My HABpanel implementation has 17 dashboards, some of which are pretty full of information (such as the one in the pic below). I also should add that the spouse is growing more displeased with the situation.

HABpanel is pretty much the only thing I have running on the iPad. It’s on a pedestal on the kitchen counter where it receives constant power (see pic below).

I’d like to find a cost-effective 10" WiFi-only Android replacement that will run more reliably than the iPad. It also needs to have a similar pedestal/stand where it can receive constant power.

Does anyone have a similar config, and can you recommend something that will save me from having to do all the research myself? 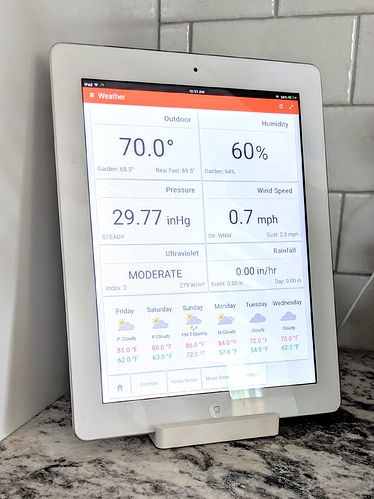 I’ve been using a 7" LG Pad… It’s been working well but is also becoming sluggish and to be honest the screen is a little too small.

My kids have the amazon 7" tablets and the seem to still be running rock solid so I’m wondering if the 10" versions might be a reasonably priced home automation tablet. Have you checked them out?

I have a Fire HD 10. It’s a good tablet for the price, but the performance is underwhelming. I can’t say for sure, but I fear it would struggle with 17 densely packed dashboards. Also, the USB cord is on the top (right next to the power button), so you can’t put it into a charging stand.

I’d probably just look for a used iPad from the past few years. I feel like you’ll get better performance out of that than anything in the cheap Android market.

I am in the same market for a new tablet like Mark. It is my understanding that you can’t control an iPad screen remotely like you can with Android/Tasker.

For me the ability to get the battery level of the tablet as well as remotely kill the screen at nights is important.

I have a Fire HD 10. It’s a good tablet for the price, but the performance is underwhelming.

I’ve looked at the Fire HD 10. While the performance is underwhelming, it’s still probably way better than the iPad 2. At a minimum, the RAM (which I suspect is the big issue with the iPad 2) is vastly better (2 GB vs 0.5 GB).

As you say, the issue I have with the Fire HD 10 is finding a stand that will hold and charge the device in portrait orientation.

I’ve got a huawei mediapad t10 which is quite good and not that expensive.

I also bought a cheap 11inch no-name Chinese one which was £50 new. It acts like a £50 tablet. Very sluggish with habpanel.