Motion detected, light on, turn off after 3 minutes but only between 8pm-5am

Its pretty simple what I’m trying to do (i think!), but I’ve done heaps of reading and research but I just cant figure it out…I’ve tried and read about expire binding, other posts, rules but to no success.

As in the heading. When my motion sensor detects movement turn the light on and then turn if off after 3 minutes but only in the evenings 8pm-5am.

I have written the simple rule below, but it only satisfies only half what I’m trying to do…

Please help, I just can figure this out and I’ve been stuck on it for sometime now, I’m hoping someone can help me figure this out. Happy to use the astro binding in the rule too, happy to use anything, just want it to work! Thanks for reading my post!

You can add time comparison like
if time i greater than and less than,
then start a timer for 3 minutes.
when timer finishes, check motion state again and if on, reschedule the timer.

I would do the complete rule in blockly, might be easier than writing in rules DSL.

Hi Hans, thanks for responding.

What would the code look like? I’m having trouble figuring out the code for this one.

What Motion Sensor are you using? In my case, using a Fibaro Motion Sensor, I can configure how long a motion alarm stays set to ON until it switches back to OFF. So for me, after the configured 30s, the alarm changes automatically from ON to OFF if no further movement is detected and a simple small rule can switch the light off.
In a rule you can get the current hour with

Like @JensD I have Fibaro motion set to stay on 180 seconds. For various reasons I have separate rules for On and Off. Besides the hour, this will not turn on the light if it is sunny

Besides the hour, this will not turn on the light if it is sunny

This could be handled with the rule template above with a condition on the called rule.

Its pretty simple what I’m trying to do (i think!),

As you are seeing though, this isn’t as simple as you might think.

Hi JensD I’m using a Xiaomi MiJia human body movement sensor, I dont know if its possible to set the time on this one - but it does set the motion sensor to OFF after a couple of minutes.

I tried using you rule there but I received errors…

Configuration model ‘stairway-light.rules’ has errors, therefore ignoring it: [1,50]: mismatched input ‘do’ expecting ‘when’

When I changed ‘do’ to ‘when’ I received…

I’ve modified your rule and hopefully it will work. I took out the luminescence variable.

Hopefully I have modified it correctly?

If I put this at the end of the rule…

It turns itself off after a couple of minutes when the motion resets. This works, but its probably a ugly way of doing it…

I have just been thinking rather than a time (between the hours of X and X turn on, how to do it only after sunset? This will mean I dont have to change it a couple of times every year…

Thanks for everyones input so far, I really appreciate it!

Hopefully I have modified it correctly?

I thought you wanted from 20 (8pm) to 5 am to go on. Mine is set to not go on (Wife gets up for midnight snack and doesn’t want lights to go on and make it harder to go back to sleep)

Also you can combine both rules with

IMHO, the jruby rules are by far the nicest to write. 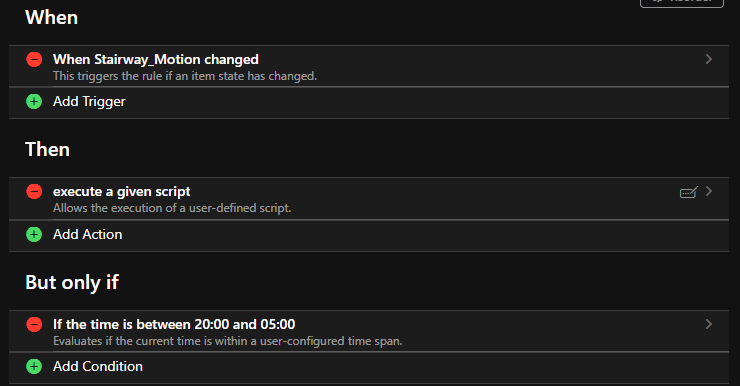 All my timers work in something close to this.

I’m genuinely curious - do people really find these graphical tools for rules/scripts easier than just writing the rules directly (in the rule DSL or possibly in one of the real languages)?

Yes. I’m an idiot and make mistakes when writing code which can be hard to track down. No syntax errors when using Blockly!

Also, I can adjust rules easily using the UI, for example on my phone - I don’t need access to the rules files.

Cool, that’s definitely one of the good things about openhab - everybody gets to pick their poison.

Just to throw my hat in the ring.

You can also use a night-state-virtual-switch rule

Your system triggers a virtual switch using the Astro binding, depending if your night state is on or off do this.

I’m genuinely curious - do people really find these graphical tools for rules/scripts easier than just writing the rules directly (in the rule DSL or possibly in one of the real languages)?

Absolutely. In addition to what @hafniumzinc mentions:

This part is a little over worked.

It’s better to stay working in ZonedDateTimes than to fall to such a low level as epoch.

Also, as written this will only work for the first day. You’d need to trigger this at midnight too to change NightState for the days after the first day.

Though I’d use restoreOnStartup and the Astro event channels which would produce a much simpler set of rules that don’t need timers at all.

In the UI you wouldn’t even need to write code for something like this (tying this back into the discussion above).

Or, even simpler, one can use the Astro Actions and see what the sun azimuth or elevation is and not need the rule at all.

do people really find these graphical tools for rules/scripts easier

I haven’t moved over to UI rules, purely because my DSL rules work and I’ve made very few modifications over the past couple of years. If it ain’t broke, don’t fix it.

In addition to what @hafniumzinc and @rlkoshak already wrote, I’m intrigued by the ability for UI rules to enable/disable/run other UI rules.

I personally find Blockly a little hard to read, but that may be partially due to my red-green colourblindness. I’ve used Scratch before with children and agree that it’s excellent for teaching them the basics of programming.

I’m intrigued by the ability for UI rules to enable/disable/run other UI rules.

That’s not unique to UI rules. It’s just not possible from Rules DSL.