Just installed yesterday evening openHAB on my RPi together with a ConBee II stick as my current setup with home assistant and ConBee II doesn’t work anymore as expected…lights can’t be switched on or off anymore…nightmare (o;

When I look at the dimmer switch items page I see that it changes the value to 4000 when “Off” is pressed…so I thought this is simple as: 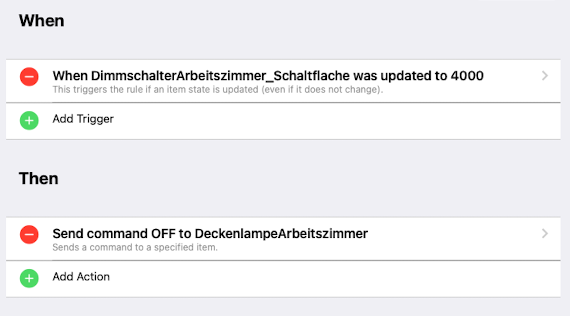 This all thing/item/model thingie is way too much at the moment as I need to migrate fast so that my wife keeps happy with my home automation system (o;

thanks in advance
richard

PS, check the logs when the rule runs as it will give you a lot of info on what is going wrong or hopefully right!

Know what I got wrong…didn’t select the right channel for the light…changed to the brightness channel (o;

Seems a long way to go for the migration…but hope it is worth and that deConz is working much better as with hass.io…

What puzzled me is that under the properties tab for lights the brightness slider isn’t working. Might be a bug in the macOS catalyst version of the app as it works under iOS.

Anyway…thanks for the quick help (o;

Even though I updated the stick this week…

Is this stick really that rubbish???
Any alternatives which is available in central europe?

Is this stick really that rubbish???

I cannot confirm that.
Had some trouble running conbee in docker at the time I used a cubietruck.
Since using a raspberry pi I don’t have problem with the conbee.
Don’t use docker for conbee any more.

Had to restart the Raspberry so the lights were visible again…

Still can’t detect the four last light bulbs though I resetted them several via the hue dimmer switch with confirmed flashing.

My three kitchen lights switched automatically off as intended after 180 seconds. The frontend still shows brightness as 100% and deConz app shows one light as still on…can’t be more unreliable as that…

Seems I need to get one of those Elelabs/Popp dongles…

Looks it is working now…though still not satisfied with the ConBee II. Suddenly the bridge was unavailable with the error message “can’t start a destroyed container”.