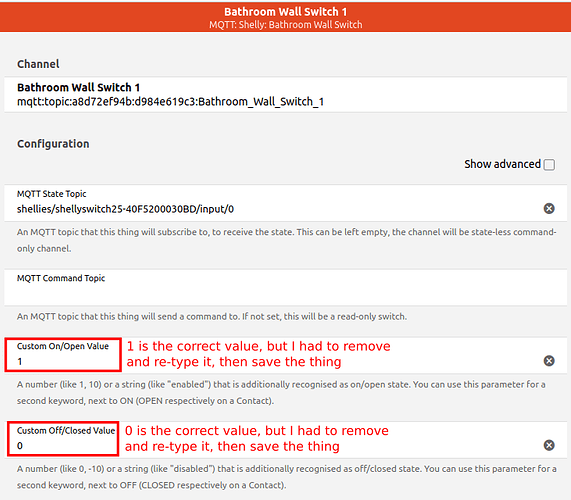 Has anyone else seen this? Or is it just a weird quirk of my setup / I did something stupid?

I initially troubleshot it by creating another channel as plain text, to check openHAB was seeing the messages, which it was, which eventually led me to the fix. It’s a weird one, so hopefully this post helps someone with the workaround if nothing else…

P.S. If anyone has any tips about why the CoAP events aren’t arriving, I’m open to any suggestions (even how I can monitor / check where the issue lies).

I recognised this from another user, but it’s slightly different. Perhaps the same cause?

Expected Behavior If I add a Channel in a Generic MQTT Thing and the GUI tells me default values for Custom On/Open...

I can confirm that’s the same bug I encountered. But with my tests I did not get it running by deleting and re-typing it (Firefox 84.0.2 (64-Bit)), I had to enter the values in the “CODE”-section.

Good news that I’m not alone!

The fix proposed in Github looks like it will work, so I think enough said on this. Hopefully anyone struggling with this issue until then finds the bug report or this post, and can get things working until the fix is merged.