I am, for the first time, trying to use the model facility properly. I have three C-Bus outputs set up like this: 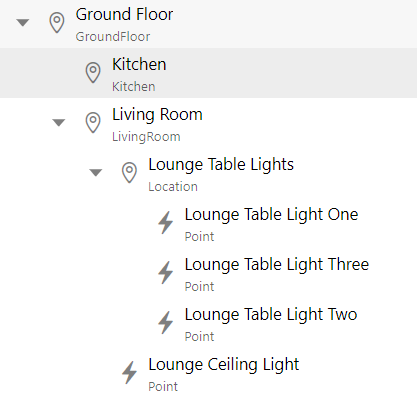 I have attached Alexa metadata to the group, and saw the warning that there was no metadata associated with the group members. So I added metadata there too although, as this screen shot shows, it only allowed me to configure one of the three outputs:

When I ask Alexa to switch the group on or off, only the output with the metadata set actually switches on or off.
I suspect I am missing something in the group configuration using the OH3 UI.

I did also try using the “toggle” option, but then speaking to Alexa did nothing, and in the app I could see that the option expanded to show three separate switches.

For lights you cannot define Alexa metadata on group level.

Remove the metadata from the group and define metadata for each light separately.
Remove the light within the Alexa app, run a discovery and you will have the three lights within Alexa.
Then you have to recreate the group within Alexa, but due to constrains on Amazon side, openhab can only sync individual devices but no group of multiple devices

For lights you cannot define Alexa metadata on group level.

That’s not entirely true. You can control a group of lights but the group items needs to be set with a group type. This is describe at the beginning of the group endpoint documentation.

However, using Alexa groups over OH groups gets my recommendation