I had my openhab working but for sometime already it is off-line.
Have no idea why.

secret code an uuid are filled in, cloud is configured/installed,shouls all be ok coz it did work before.
Java version = 1.8.0 121
Anybody any idea what could be causing it and how to solve it? 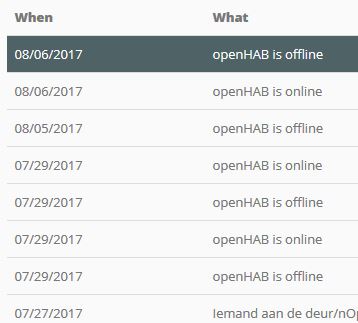 secret code an uuid are filled in

From tinkering around or maybe an upgrade to a newer version caused the UUID or SECRET to change?
This can happen if you accidentally deleted one of those, then after the cloud binding starts it will generated new ones.

Double/Triple check if you have the correct keys in your myopenhab account.

Also check to make sure the openHAB Cloud Connector is still showing the proper values in PaperUI. Make sure it’s connecting to https://myopenhab.org/, and is setup for notifications and remote access.

I think I once had to uninstall and reinstall the service also, never did find out what was wrong.

Do your logs say anything? It should say something about trying to connect to the cloud connector when you freshly boot up your openHAB server.

Thanks, How would I know that these changed? Where would I find those new values as i did various updates. I never changed anything so i presume the keys that myopenhab shows are the correct ones

Earlier though updates never broke my connection, but now i seem to have an IO socket error.

thanks, yes that is all ok. Just to be sure i also added the values in a cfg file.

TBH I forgot the exact process of how i setup myopenhab last time. If i remove and reinstall the service do i need new uuid/secret code?

When upgrading the recommended way the UUID and SECRET don’t change but one never knows.
Open the two files in a text editor and compare them with the values in your myopenhab account.
Make sure they are the same …

That indicates either the UUID or the SECRET or both are wrong.

To find the files see
http://docs.openhab.org/addons/io/openhabcloud/readme.html

Thanks, I never realised those codes were somewhere on my system
Apparently both codes were different.
I entered the two codes from the files into my myopenhab account, clicked ‘update’ but sadly still offline.

Maybe i am impatint and need to give it time to reconnect?

Try restarting openHAB (or your server) and check the logs again.

yes i had restarted already but it took some time. But indeed it works now. Thanks, I never realized those two keys could just change

@Dome Yes you were right as well, thanks, As I told sihui, I never realized those values could change.

Thanks a bundle both of you, I learned a lot again

Glad you got it working! It’s a great feeling when you star to figure out how to solve problems. The logs are often a source of good info in this regard!

Just to be sure i also added the values in a cfg file.

I’d be careful with this. I’ve had issues in the past when I configured my Nest binding with both a cfg file and the PaperUI. openHAB only reads from one place at a time and it can be unpredictable if there are two different sets of settings.

Thanks, yes, I realized that. I may remove the cfg file again. I already noticed that of two items i newly entered in the paper UI as needing to be discoverable in myopehab, only one is recognized, maybe that is why.
Thelatter not such a big issue though as I mainly want myopenhab for worldwide acces to my UI when on the road. Any links to IFTTT i wish to make i can do eith webhooks.

Regarding your first point, yes I finally have the trust i can tackle most issues myself. Sure, i still ask lots of questions but there is a lot more that I dont ask coz i figure it out myself