I am trying to add a Neo coolcam door sensor NAS-DS01 which is in the database OpenSmartHouse Z-Wave Device Database but named NAS-DS01Z. my is without Z in the end.

I have woke the device but no channels pop up.
I guess its missing support

Also this is copy pasted from thing properties accordian

This is from my logs 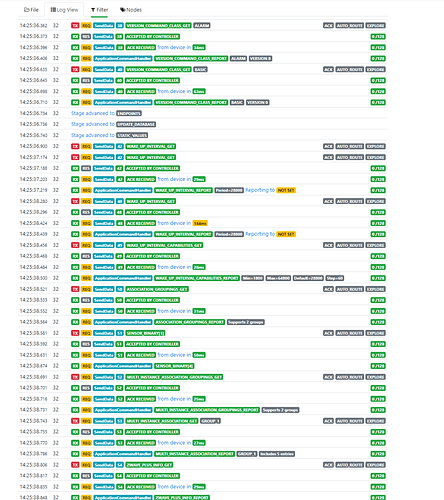 Do I need to create a new device or am I doing something wrong?

I’m pretty new to the device database, but I would give a qualified yes. Something will need to be modified. The

Is showing the manufacturer (0258) and device ID (0200:1022) On the page you linked that device ID is not among the possibilities. It might be a simple matter to just add the device ID to the list on the page you referenced, if all the other elements look the same.

The Debug extract is only part of the initialization, so its hard to say anything else (if something else went wrong earlier (or happens later), except that it is past the stage (IMO) that the device would normally be identified.

Can i somehow configure my openhab instance so that my device is identified as the one I linked to? So I can test it.

I’ve updated the database to include this ID.

Thanks! What does that mean? Do I need to update my local database in Openhab somehow?

I found out that it is possible to update the zwave binding in the karaf console.

I saw there was an url for the zwave binding build (pull request) where the updated ID was added.
https://ci.openhab.org/view/Pull%20Request%20Builds/job/PR-org.openhab.binding.zwave/lastSuccessfulBuild/

But that pipeline does not contain any artifacts. If it would exist I could update to that artifact. With bundle:update command.

At this point, it looks like the database update is a PR, but has not been merged. Should happen in a day or so. I’ll point out that @chris saved you several days by updating (and approving) the database entry.

This is now merged so will be in the next snapshot.

Thanks! Appreciate it! I will wait for the snapshot then!

Thanks @chris! I tested the snapshot version of the zwave binding and the channels appeard in the GUI. I haven’t tested if they work but I will later today.

Thanks @apella12 and @chris I tested the snapshot now and it worked with my zwave device. Great work!