No sitemaps in openhab 3 Oliver

im having issues with sitemap not being available 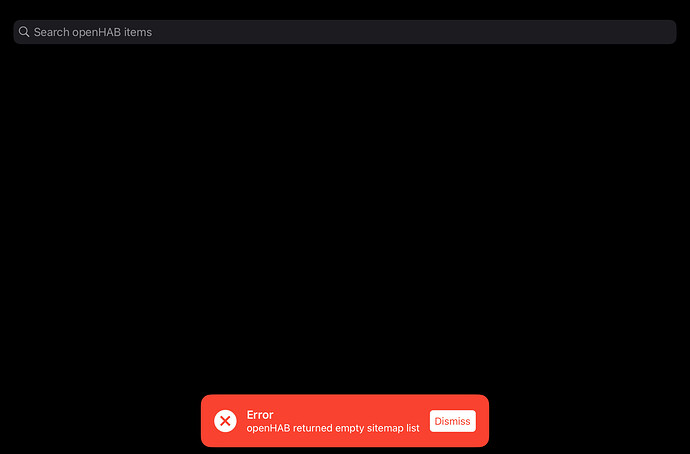 hope this helps from Oliver

I’m hitting the same issue on the iPhone app after installing openHAB Cloud. Is the idea to textually define a sitemap in the conf folder or can it be done through the new UI?

Same here… works for a while after I’ve created a new sitemap through main UI. After this one disappeared I created another one - but this also was not accessible through basic UI and IOS. API call for sitemaps returns nothing. Both sidemaps are visible, editable, and “validated” in main UI.

but on openhab 2.5 it did it automatically

Hi - two possible fixes that works for me:

Thanks Hermann for your suggestions. it still does not work for me. I cleaned up a sitemap and it was visible for some time but then turns blank in the IOS app.

Any other thoughts? An IOS app bug? depreciated code with OH3?

I had the same issue with the iOS application. There seemed to be an error. If you have access to the Testflight version then the last two updates fixed this problem. Note that it works locally with your version but not through the cloud.

I have not bend able to get the new UI of openhab 3 running on iOS yet.

Hi,
I do have the same problem.
My sitemap did run well in Basic UI and also on iPad and iPhone.
After creating and deleting my first example rules, the sitemap disappeared on all UIs (Basic and IOS).
A new sitemap can be created and can be viewed in all UIs.

Question:
Is there a possibility to copy the code from one sitemap to another?

Appendix1: (depending on message from Unclfuzzy)
in my case deleting the used items from the deleted example rules and deleting this in the model and the disappeared sitemap has no improvement.

Appendix3:
Creating new widget in this sitemap and a new sitemap also does not work.
It seems to be that my OH3 datamodell is corrupt!
=> I can’t work anymore

I have the same issue. I was tweaking my sitemap and then it just disappeared from Basic UI and Android. I have a simple sitemap with a switch for the main lights and several frames representing rooms, each that has switches for lights and rolladen and/or slider for dimmers. In one frame I added a setpoint for thermostat and set the current temp as the “Item” for the frame, and after that the sitemap disappeared. Changed the type for the frame back to nothing and removed the setpoint item, and the sitemap is visible again.

how do I do this Changed the type for the frame back to nothing and removed the setpoint item, and the sitemap is visible again.

Thanks, had the same problem too and this helped me to view my old sitemap again till I’ll create OH3-Pages.