I just released an integration between openHAB and the Nuimo. The concept here is to use Nuimo as a UI / control device for openHAB (similar to what the Nuimo Android/iOS apps are offering for very few systems like Hue or Sonos). My app is meant for installation on a Linux system, e.g. the Raspberry Pi - preferebly, but not necessarily, on the same system where OpenHab is installed.

If you want to have look on it, you can find the documentation how to install and use it here: GitHub - pfink/nuimo-openhab-python: Use your Nuimo as a UI for openHAB!

Unfortunately, Senic ended support and production of the Nuimo. Anyhow, there are some white Nuimo’s left and they have a special offer for users that plan to use the openHAB integration: You can buy them for 100,-€ (which is 50% of the original price) by just writing an e-mail to them at hi@senic.com. Just write in your subject “Nuimo openHAB Sale” and the number of Nuimo’s you’d like to order. Beware that there will be no official support for the software side by Senic anymore, they only provide support for proper functioning of the hardware.

Before you buy a Nuimo, you should know that it’s range is quite short (The “safe zone” for a very stable connection has a range of 2,5 - 3m in my setup). Also, the battery has to be charged via microUSB every few weeks depending on usage. Last but not least, the connection quality with the built-in adapters of the Pi is extremely bad for all Pi’s until 3B. With 4B, nobody has tested it yet. If you use the Pi, I recommend using an USB Bluetooth Adapter that supports BLE.

After seeing this, I am having second thoughts about using a wall mounted tablet… Maybe I will go the Nuimo way with your integration package

My Nuimo has been gathering dust so far in a dark corner since their Android and third-party support is so poor. I was looking at doing a MQTT gateway on a C.H.I.P. single-board computer, but haven’t quite found time yet, so I’m really looking forward to this!

Cool. I have also got a Nuimo here and was waiting for the BLE support in Eclipse Smarthome. Will try it as soon as I find some time.
BTW: Senic just announced a Smart Home Hub based on an open source (maybe Smarthome???): https://blog.senic.com/posts/what-were-building-next

Also FYI, @pfink, you might be able to borrow some code from https://github.com/wind-rider/nuimo-mqtt-manager

Today seems to be a BLE and Nuimo day. Here is another thread about connecting BLE devices in general with MQTT https://community.openhab.org/t/mqtt-ble-gateway-binding/

My Nuimo is nowhere near my OpenHAB2 server, so Bluetooth won’t reach. Does this have to run on the server or can it run on a remote Pi/CHIP?

My idea is to support BLE via remote devices using a MQTT gateway. However, this is not directly integrated into openHAB yet.

@blassphemy: Yes, I saw your work before I started my one. But for my use case, it didn’t fit because in your scenario, openHAB is just one of multiple apps that could connect to Nuimo. I wanted to use the Nuimo completely as a openHAB UI and therefore also wanted to have the openHAB menue on “root level” as well as some openHAB integration features like support for Icons etc… I think both our libraries have their purpose. MQTT is more flexible and enables you to keep interoperable with other applications than openHAB, but if you use it together with openHAB, setup is much more complicated as you have to do much configuration on openHAB side.

@MHerbst: I’m in contact with Senic and can tell you that Senic’s Hub is, unfortunately, not ESH-based.

@idean: As you can see when you take a look into the configuration file, you can configure the openHAB API URL. Of course, this could also be a remote URL

I develop the integration on a remote Raspberry Pi and their is no noticeable difference in reaction time (but the remote connection is established via Ethernet, didn’t test WLAN).

A lot of progress happened since my last post, I just released an Alpha version that contains most of the features that the stable version will have. Especially it introduces:

Planned improvements for the Beta release:

Beta release is available as well now which is working quite stable already. Stable will follow soon.

I’m going to check this out… two questions though…

Can I use the inbuilt Bluetooth of the later Raspberry PIs ? I believe so as you mention a roaming handoff using PI zero W above … neat.

Can I attach several Nuimo controllers this way with independent functionality to one OH ?

Update…now had a read of the GitHub info and looks like I can do both of these things, hopefully I’ll try this weekend.

Exactly, both is possible. Regarding how to attach two Nuimo’s you could either:

Regarding handoff: Basically, there is nothing special implemented for that. It’s just working out-of-the box that if the Nuimo loses the connection to a BT adapter, it’ll automatically connect to another one if such is in range. So you have in fact a short disconnect.

now all code changes I’d like to do before the stable release are done. I’ll test the current code state for a while now to be sure that the latest commits did not introduce any new issues. If you want, you can do the same. Short howto:

Do a new installation on this version: git clone --recurse-submodules https://github.com/pfink/nuimo-openhab-python (other than stated by the docs, without -b latest-release)

If you find any issues, please post them on GitHub. If there is nothing reported and I’m not experiencing any issues myself, I’ll release this version as 1.0 Stable.

version 1.0 Stable is released now. Beside a bunch of bugfixes, there are also some new major features in this version: 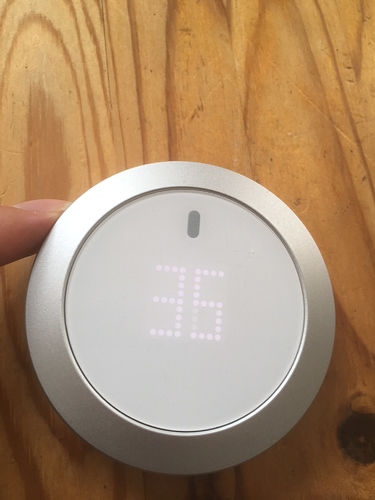 Hey.
Could i controll anything in openhab? Its an awesome device but they are not very much services that work with it. I would love to see to controll my shades or trigger my harmony hub actions with nuimo. Is this possible? Am i being right if i think you are from germany? if that’s right you could answer me in german.Because i am as well. Im not new to the smart home world but new to openhub. But it sounds very interesting and im thinking it is the system that i am searching. At the moment i have a rasperry pi with homebridge. Which i would upgrade, if it works. I hope you can help me out.

Hi Leon! Yes, this integration allows you to control any other device that is integrated with openHAB.

Meant to look at this a while back but I’ve been playing today and I have it working now. Very pleased.

It took me a bit to get my head around how it was all linked together and I think it would benefit from a step by step instructions for ‘newbies’ about the openHAB link side… I might try and post something over the next few days.

Have you ever run the app within the OpenHAB Docker container Patrick ?
I had some problems with BlueZ and access to the adapter so in the end I’m using the OH Docker container but running the app outside of that. I think I may have just found information that would help me on this though using priveledged mode.